I ran across this comic and had to share. This is hilarious and oh so true! Although I think the fat cat could also be Agri-Corp. 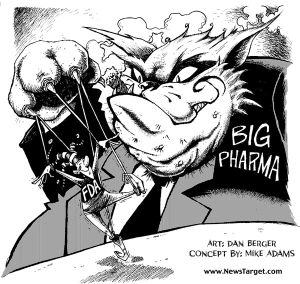 This was taken from www.newstarget.com and the explanation is below:

This is the first comic produced with the joint effort of Dan Berger and myself (Mike Adams). I’ve been working on creating comic ideas for nearly two years, but didn’t have the illustration skills to produce them myself. Through a friend, I hooked up with Dan Berger who, as you can tell, is an extremely talented artist. The result: A political cartoon that brings to life these hard-hitting ideas on health, medicine, the FDA and other similar topics.

Why the giant cat? When I explained this concept to Dan, I described the Big Pharma CEOs as “fat cats” and he took the image literally!