↑
You are here: Home / Birth & Baby / Can Natural Parenting Be Learned? 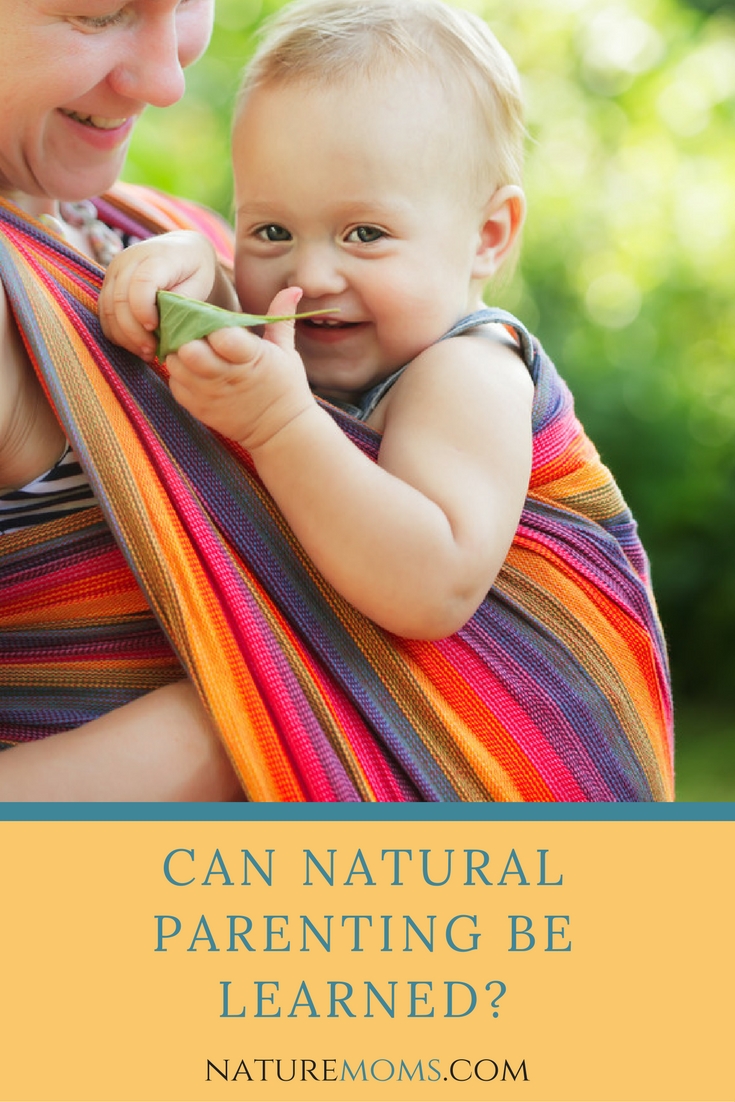 Is the inclination to adopt a natural parenting style something you were born with or is it something you can learn? Can you actually learn to be crunchy?

My answer is a resounding YES! I say this because I was not always a natural or crunchy person or parent. I learned to be crunchy over the course of several years and have never been happier with my new outlook on life and family living.

When I had my first child I did not have or desire a natural childbirth experience. I considered numbing drugs to be the only option, ignoring all passing thoughts of side effects or complications. I DID want to try breastfeeding but I also planned on supplementing with formula right from the beginning just in case I found breastfeeding to be inconvenient. I used disposable diapers. I had my newborn baby vaccinated on day two of his life without even giving it a thought. As my new son grew older I rushed him into solid foods and I was anxiously awaiting the day when I could just drive through McDonalds and get a happy meal for him, creating a worry free, work free meal for the both of us. When he was old enough that is exactly what I did and I am now ashamed to think of how many Happy Meals he used to eat. Never did it enter my mind that there were other alternatives that may be better for my child. I simply did what was conventional and stuck my head in the sand.

So now that I have given you some insight into the old me, you may be asking so what changed? Well, about three years after I had my son I became pregnant again. I had taken a job in marketing and advertising and the hours were very relaxed and I had time on my lunch hour to surf the Internet. I quickly became addicted to Yahoo list groups and I eventually found one for expectant mothers. The list owner was a very crunchy or natural mother of five and she posted many times daily about natural parenting. I would like to say that I immediately became enchanted with the more natural lifestyle but truthfully I used the group to argue her points on many occasions and since the majority of other expecting mothers on the list were also very conventional, they sided with me in defense of non natural ideals. I argued that natural childbirth was silliness that need not be the goal of any expecting mom. It seems crazy to go through the pain of childbirth if you didn’t have to right? I argued that interventions such as epidurals, forceps, episiotomies, premature rupturing of the amniotic sac, etc.were all GOOD things and posed no significant risk to mom or baby.

I was quick to defend my parenting style and I would quickly discard any evidence brought before me that might show that other alternatives might be better. I did NOT want to entertain the thought that I was providing my child with substandard care. In the back of my mind though I would think to myself do I actually have any evidence that supports my parenting choices as the best ones available or I am I just following the crowd and doing what the masses do? This question came up more and more as the weeks went by and I began to struggle with an answer.

One day the list owner, Pamela, emailed me to ask if I had read any of the information she had sent me links to. This was after a heated debate on the list about vaccines. I wanted to reply that I had read it all and then list a bunch of resources and sources that refuted her evidence but I couldn’t. I had to admit that I was making my decisions blindly. So right then and there I looked at the information she sent and visited a dozen web sites and read about 20 articles of information about the dangers and the benefits of vaccines. After the first article or two my stomach got a little queasy. After I had finished reading all the information my stomach was so twisted in knots that I thought I would pass out. I wasn’t just reading a story about another mom and another child. I was reading my story my son’s story. Everything clicked into place and I realized that the events following the routine vaccination of my son including seizures that ended up causing mild brain damage were not uncommon. My child had indeed been injured by a vaccine. I had always believed it but now I was seeing that this was common.These things were dangerous!! Forget all of that documented information about the dangers of vaccines my son was the proof in the pudding and here I had been defending vaccines because the medical community said I should (I will post more on this later).

Well, after that realization I wanted to email Pamela right then and there and tell her she was right. But wait.if she had been right about that, then what else had she been right about I wondered? So I dug into the group archives and researched every aspect of natural parenting. I joined dozens of new list groups that were home to natural minded individuals and I absorbed the information like a sponge. The research and the facts could not be denied. Going natural was the better choice for me and for my children and I wondered how I could have missed that. I also started making changes small and large. By the time my daughter was born a few months later I was a different person.

I gave birth to my daughter naturally and without the medications that I once thought I HAD to have. I decided to exclusively breastfeed and not a drop of formula passed her lips. In fact I nursed her until she was over two years old, even tandem nursing her and another newborn baby that I bore naturally. I only stopped nursing when I had to be treated for cancer.

I refused all vaccinations and I delayed solids until she was 8 months old and when she did start solid food I made sure it was organic. I also started sewing cloth diapers shortly before she was born so that she could be diapered in soft cotton diapers right from birth. I carried her in a sling frequently and I welcomed both of my children into a family bed. All of these changes made for a happier and healthier family life.

When I talk to others about natural lifestyles and parenting choices I hear many moms say “Oh I am not into all of that”. Well, neither was I. But I saw a need for change and I started a journey that I have never regretted once. I don’t follow the masses anymore. I blaze my own trail and I do it with a natural flare for life. I DO believe that natural lifestyles and parenting can be learned if you want to make a change in that direction. Say goodbye to your super soft, Jell-O side and welcome in your super nutty self. You will be glad you did!