I dont know how I missed this headline but when I saw over at Wellness and Beyond. It had me seeing red. Apparently a reporter, Michael Gartland, 33, of Jersey City, along with Thomas Adamkiewicz, 63, of Hewitt, a field manager for an environmental testing firm, were arrested after they went to West Brook Middle School to collect soil for an independent analysis. Gartland had broken a story about how the school found that soil in the area was heavily contaminated with pesticides and failed to alert parents for 5 whole months. This had the school feeling ansty and parents feeling outraged.

No doubt it was this schools lack of integrity in alerting parents that prompted Gartland to go to the school and collect soil samples for independent testing, despite the fact that the school was already having it tested on their own. This is just ridiculous really. Public schools are on public land and if there is something potentially hazardous in the soil then all concerned citizens and especially those with children who attend the school, 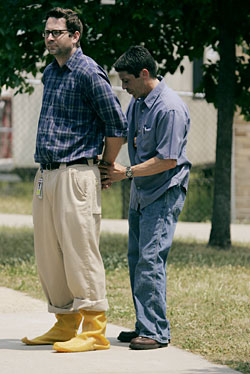 should be able to evaluate soil samples themselves if the notion strikes them. Is a public school a business or are they there to serve the public? It is most certainly a service that is paid for with taxpayer dollars and the arrest of a man trying to make sure the soil was safe for kids should be applaudednot arrested.

This story brought to my mind a school not terribly far from me.

River Valley High School in Marion County, Ohio sat atop a waste dump created by the US Army. Tests now show that students may have been exposed to more than 75 hazardous contaminants, including 16 of the 20 substances that the U.S. Agency for Toxic Substances & Disease Registry rates as most toxic. Everyone in the area is very familiar with this story because so many of the graduates ended up with various cancers and especially Leukemia. Using established methods, it was calculated that the incidence of breast cancer was 30 per cent higher than expected; ovarian cancer and melanoma, two times higher; cervical cancer, four times higher; and leukemia, six times higher. And the victims speaking out were receiving death threats because it was perceived by many in the community that this bad publicity was making property values plummet. And of course the school took a lot of heat because they knew for quite awhile what was below the school and did not warn parents until the last possible second. It was a big old mess.

These stories should teach us that even schools will not look out for our kidsonly we can. This makes me want to do some independent soil testing….hmmmm.