↑
You are here: Home / Children / I Really Should Homeschool 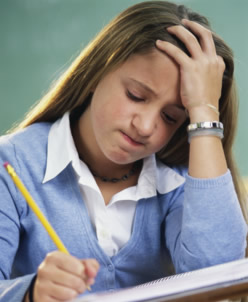 I don’t have many positive things to say about public school lately. In fact I don’t have anything positive to say really. I wish my oldest son (7) didn’t love going to school so much because I personally think that it might be a bad idea.

We had a long road to travel with his vaccine injury and his epilepsy. I was told long ago that he might have some difficulties with learning later on due to his brain injury so when I sent him to school I was VERY nervous that he wouldn’t do as well as the other kids and he would be made to feel inadequate. I lucked out in Kindergarten as the program was similar to Montessori education but I am not so lucky after our move to Ohio.

He is now in the BEST school in the county which I can now see is going to be a HUGE problem. My son is having trouble reading. In my opinion this is no big deal. I have no doubt he will learn to read just fine…even if a little slower than those in his class but it is a big deal to the school, who is now pressuring me with group review meetings designed to help my son with his “problem”. In these meetings it is me, the principal, my son’ teacher, his new reading teacher that was assigned at the last meeting, a Speech Language Pathologist, and the school counselor. Basically we are supposed to brainstorm ways to help my son “catch up” with everyone else.

The problem is I don’t think he should have to “catch up”. What in the Sam Dickens is wrong with a child learning to read and write at his or her own pace. Why do ALL children have to live up to this cookie cutter definition of a “good” first grader? Grrrr. I got really angry when two letters came home this week about this “issue” and one of them basically hinted that my son is becoming withdrawn in class as he begins to feel like an outcast that doesn’t have the same abilities and skills the other kids have. Whew….when I go to that meeting next week they are going to be sorry about that one. If anything it tells me that THEY are making him feel like an outcast…if in fact he is feeling that way…which I doubt. If he is being withdrawn it is likely because they are reading aloud in class and expecting everyone to be able to do it and he can’t. Sounds like a good reason to not participate if you ask me.

So I am at a loss about what to do. I would hate to pull him from school against his will but I have no doubt that these teachers and this school WILL undermine his confidence eventually and I will be one mad mama when that starts to happen. Putting him in a private Montessori school really isn’t an option because there aren’t any here. Right now I am looking at Sylvan and Kumon for tutoring but I HATE the thought of adding more school work to his life. His weekday schedule is this….get up at 7:30, get on bus on 8:00, get off bus at 4:00, play until 6:00, eat dinner, do homework, go to his bedroom at 8:00 and watch TV till 9:00 and then sleep. Rinse and repeat. Homework last night consisted of two math worksheets, 2 books that had to be read, and one reading board game that had to be played. On the weekends I let him run free. Especially since he only gets to spend every other weekend with his Dad (who travels extensively for work).

So what I do when I don’t consider the school’s problem to be a problem? Yank him from public school? Get his some tutoring? Ignore it? I wish I knew what to do.

Anyone have any ideas, experiences, or insight to share?