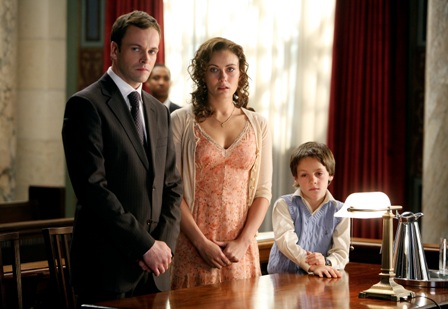 Granted…this sounds like a bizarre topic for this blog…but did you happen to catch the premiere episode of the new TV show Eli Stone? I was anticipating the show ever since I heard a few weeks back that the pilot episode would be addressing a topic I have discussed here several times…the vaccine/autism connection. I was so happy to find out that a major network television station was going to be brave enough to trounce vaccine manufacturers in their fictional courts. I was also hopping mad when I heard that the Academy of Pediatrics was lobbying to get the show cancelled so as not to make any silly viewers think that there actually might a be a vaccine/autism connection and therefore refrain from getting their kids vaccinated.

Not only did the pilot episode premier as planned it was one awesome show! I am now a loyal viewer and my TiVo is already set to record every morsel. It had everything you could want… George Michael, magical trolleys, visions, prophets, mystical Chinese doctors….LOL. It was a bit unusual but that is what I loved about it.

Basically the show is about Eli Stone…you know…THAT guy…the powerful attorney with lots of money, a Barbie doll girlfriend, and the world at his feet. He has everything he could ever want and then things get a bit screwy when he starts having visions and hallucinations. It all starts shortly before a woman (Beth) walks into his firm to sue his client (a pharmaceutical company) because her son developed autism after being vaccinated with one of their products. The additive she mentioned as the causative sounded strangely enough like mercury (thimerosol), I think they called it Mercuritol (get it: Merck Cure It All, LOL) on the show. Anyway, she refuses the $100,000 hush offer they put before her but at about the same time she appears in Eli’s life he starts hearing music that no one else can hear and that night at his home he finds George Michael singing “Faith” from his living room couch. He subsequently faints and gives himself a concussion.

The next day Beth comes to his office and asks him to switch sides and represent her and her autistic son instead. He politely refuses to do so feeling it would put his job in jeopardy but as Beth leaves, the sly way she says goodbye to him and then the onslaught of more music, leaves the audience and maybe Eli as well, to think that there is something about this woman that is familiar to Eli. He runs after her only to find a full blown concert by George Michael inside his law firm. Once again no one else but him can see this.

In a panic Eli consults a Chinese medicine man to get acupuncture treatments. In doing so he remembers where he knows Beth. They knew each other 15 years prior in college and he had lost his virginity to her and in the background “Faith” by George Michael was playing. He goes to her house to visit her and see her son and something remarkable happens that makes him take her case.

Another wild hallucination leads him to a medical diagnosis that rocks his world and gives him some insight into his bad relationship with his father. The Chinese medicine man also tells Eli that science might explain the visions…but perhaps something more spiritual might be causing them to manifest, aka the music might have been a hallucination but the subsequent appearance of Beth wasn’t. The medicine man claims that Eli might be some sort of modern day prophet and this coincides with something his father had said to him not long before he died.

I won’t go into the whole show because you HAVE to see it. All the court action between Eli and the vaccine company was awesome…especially his closing arguments about having faith in people to do the RIGHT thing. It was superbly written and superbly acted and I have been a fan of Jonny Lee Miller for a long time so it was refreshing to see him again. Loved it, loved it, looooved it!

If you missed it don’t despair…I did too. :) I bought it via iTunes. If you did catch it, did you like it as much as I did?

Edited to add: BTW it seems many people are searching this topic so they can leave nasty comments about stupid people who don’t vaccinate. If you get the inclination to post something non-constructive and meant to be just plain rude like that…it will be deleted!