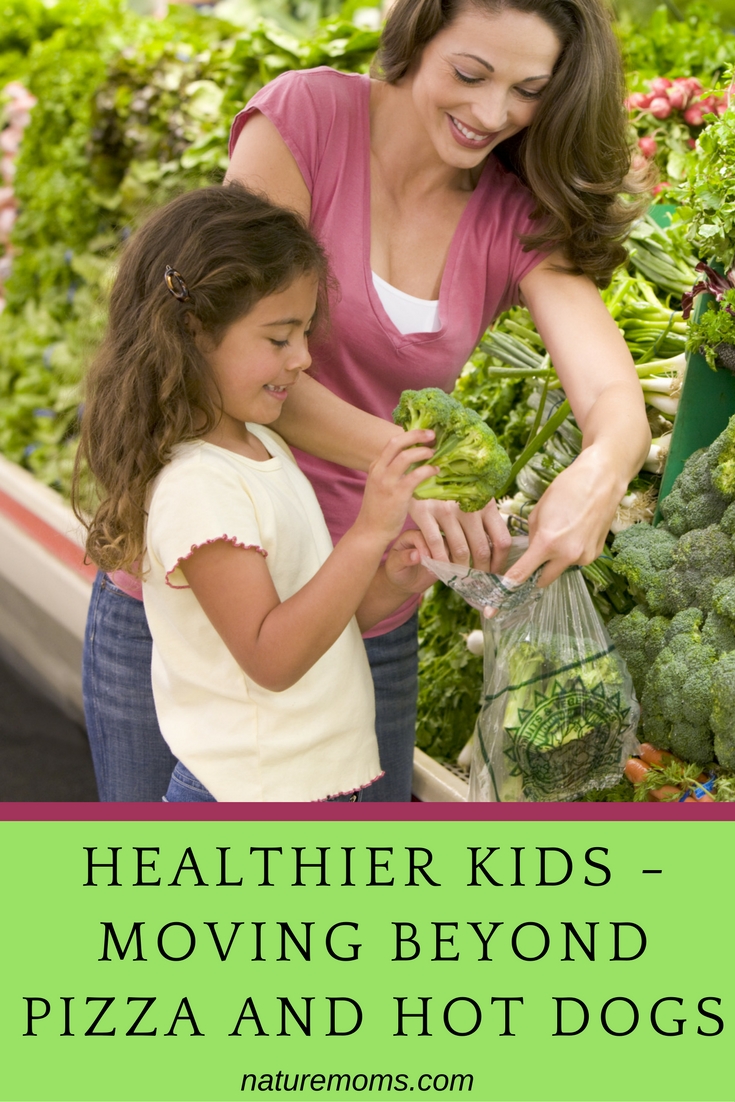 One of my readers, Tessa, recently left a wonderful comment asking me to share some ideas for parents who are just starting to analyze their children’s eating habits and try to change them. Specifically she said she would like to see “recipes for kids who are used to eating pizza and hot dogs”. This is a hugely important topic because there are so many parents out there that allow their children to be nourished by a diet of pizza, hot dogs, chicken nuggets, and French fries. I think they have some idea of how BAD this kind of food is but they probably don’t know just HOW bad these foods can be. Convenience may also be playing a big factor in how they feed their kids.

But to me this is a very serious issue. When I was 18, I started working in a movie theatre while I was in college. For years I ate buttery popcorn and soda as meals…it was accessible and it was free. Then when I had my first baby and I started working in marketing and advertising I let my 60+ hours a week work schedule dictate our diet. Let’s just say my oldest child had a lot of Happy Meals. This went on for about 2-3 years and started to change for the better when I got pregnant a second time and quit working. As my life made a huge shift towards natural family living and my days were spent at home, our diet improved greatly. But it was already too late…I would be diagnosed with colon cancer not too much later and it was stage 3 so I had it for awhile and didn’t know it. I think I had everyone in my family shaking the naughty finger at me. We pretty much all knew why I got cancer. Needless to say I look at food a lot differently now and I LOVE to research as much as I can on the subject. Amazingly I found that 40% of all cancers are attributed to diet. Yikes!

Also, I wanted to mention that my son (who was injured by a vaccine) developed epilepsy by the time he was 3. The part of his brain that caused the seizures was actually damaged so Doctors held out little hope that he would ever be seizure free. He went on prescription medications as suggested by his neurologist but I also decided to see if I could control his epilepsy or even get rid of it by changing his diet. Within a few months of following a diet like the one I describe below, I took him off his meds and he has not had a single seizure. His Doctors are still scratching their heads over that one.

Here are some scary health facts about the healthy diet/kids connection:

* Autopsies done on children as young as 2 years old are showing signs of fatty cholesterol buildup in the arteries.

* Over 100 studies have been done that validate the theory that food dyes and additives are a factor in ADHD and ADD.

* 14% of children now have type 2 diabetes, a condition that used to be pretty much specific to adults.

So what can you do? I don’t want to lay down a list of hard and fast rules here because well… different strokes for different folks but…in general the things most important to me when I feed my own kids are these:

* Organic foods – It is important that my family eats food with no pesticides, antibiotics, hormones, or chemicals in it. All of these things can accumulate in the body and cause health problems. For me it is issue of clean or dirty almost. Organic is “clean” food and I that is what I want to eat and what I want my kids to eat. I wrote an article last year about how to eat organic affordably.

* No food coloring – Synthetic color has no nutritional value whatsoever. Beyond that, the food colors approved for use today are in a class of chemicals called polycyclic aromatic hydrocarbons that are universally suspect as carcinogenic (cancer causing). But according to the FDA it only causes cancer when it is injected into rats, not when they are feeding on it. Therefore, they conclude that it perfectly safe for humans to eat. Food coloring is also predominantly in super sugary foods that kids don’t need anyway. My oldest child can be VERY hyperactive after he eats something with food coloring in it.

* Unprocessed whole foods with no preservatives or additives – Many processed foods have chemical preservatives and additives in them. Some of them have been linked to cancer too. For instance, hot dogs, bacon, and deli meats are packaged with a preservative called sodium nitrite. In the 1970s it was discovered that sodium nitrite was not safe and it was linked to cancer. The government tried to ban it but food company lobbyists played hardball and in the end they got their way. These type of products are a no-no in my home unless they are preservative and additive free. Dedication to whole foods would also eliminate things like white breads and flours because they have been refined and left nutritionally lacking.

* No refined sugars  – Refined sugars can really be bad news for my kids where behavior is concerned. This is especially true for my daughter. Give her a bit of sugar and she will be unbearable all day long with bad mood swings, crying, tantrums, and irritability. Refined sugars will send my oldest into hyperactivity and aggression.

* An abundance of raw (uncooked) foods – Raw foods are living foods with their life giving enzymes still in tact. Heating and cooking foods kills those enzymes and renders them useless so eating raw food is important. Cooking also kills off a large portion of the vitamins and nutrients, approximately half of the protein content, and it causes fats to become rancid.  I like to make sure my kids have lots of raw fruits, nuts, and veggies in their diet. Check out my previous post on the benefits of raw food.

* Raw (unpasteurized) milk and cheeses – They might be hard to get in your area but the benefits are wonderful. In fact raw milk is the only milk I can drink. Check out the Real Milk site for all you could ever want to know about raw milk and where to find it in your area. I also prefer raw, organic because I don’t like pesticides and growth hormones like rBST in our milk.

* Limited meat (except fish)– I like to limit meat for a variety of reasons…one is environmental impact. Meat eating is a big time contributor to pollution. Organic meat can be expensive and is therefore less likely to be the heavy on my grocery bill. Also, since I like to emphasize raw foods as much as I can this usually leaves meat out. I won’t prepare raw/very rare meat dishes in the home but when we go out we will enjoy a good steak tartare and we LOVE sashimi and sushi. Usually once or twice a month the whole family will head out to our favorite Japanese market for fresh sashimi and we usually have one or two cooked fish meals a week.

* Superfoods –These are the foods that are considered to be nutritional powerhouses. They are generally rich in antioxidants, nutrient dense, and they help the body fight degenerative conditions and diseases like cancer. We like blueberries, Goji berries, seaweed, Spirulina, and cacao beans among others. Just throw some seaweed, green powders, or Spirulina in a fruit smoothie and everyone is getting a big boost of healthy nutrients.

Of course these are my choices for health. I have other sticking points that are more ethical in nature such as eating local when we can, growing our own food, and I guess organic falls in under the ethics category too. It is a heck of a lot to consider for a someone who is just beginning to question the standard American diet but baby steps are okay. My outlook on food as outlined above was not an overnight thing. Try picking one thing above, do some research on your own and see how you can make some changes. When you have that aspect under control switch gears and start again. This is one area where you may never stop learning…I know I haven’t. The end goal is worth it though…the health of our children. You are what you eat.

Be sure to check out the recipes section of this blog…and these related articles: