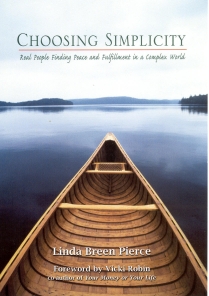 Over the weekend I read the book Choosing Simplicity  – Real People Finding Peace and Fulfillment in a Complex World by Linda Breen Pierce. We live in a world where the predominant attitude is that money and the general accumulation of things brings us happiness. We are told over and over again that we should get an education, get a high paying job, marry well, invest wisely, do this, do that….and you have the recipe for happiness. All you need is more, more more! And then at some point you will be able to turn around and look at all you have accomplished and see all you have and be instantly happy. Check out this article on NPR that talks about how obsession with bigger and better housing is rampant today. But what about the people who never buy into that way of living or thinking? What about the people who look at the fast paced world around them and all the rats scurrying to better their situations, and say no thanks?

According to Pierce, the inspiration to write this book originated with her experiences living in a remote African village while in her twenties. The village had 400 people, no electricity, no running water, no convenience foods, no plumbing, and no cars save one the whole village shared. They lived in mud huts and they were often malnourished and suffering from skin ailments and ulcers. Pierce held dying babies in her arms. While most Americans might think this sounds like hell on earth, these villagers were the happiest, most joyous, most fulfilled people Pierce ever met.

According to Pierce it was difficult to distinguish work from play. They were always laughing, dancing, and singing. Huge belly laughs abounded all day long as they worked. They danced late into the night. They were happy.

Yet, even having seen this first hand Pierce made her way back to America and became a part of the fast paced, rat race. Many years later she read an article in Worth Magazine called Downshifters and it was all about simple living. She loved the article and quickly devoured other articles and books about the same subject but there was something missing. She didn’t want tips and advice for how-to live simply she wanted stories and experiences from people who were actually putting these concepts into practice. Could they sustain this lifestyle for a long time? Did they feel like they were missing out on things? Did they have regrets?

It was because Pierce was interested in finding these answers that she was inspired to start a study on simplicity and interview people who had accomplished a little of bit what those African villagers had. Was it possible? What did simple living actually look like within the lives of modern people? Frankly I find it kinda crazy that we have to wonder what simplicity looks like….that is how often we DON’T see it I guess.

This book has some amazing stories. It has the experiences of people from all over the world who have chosen simplicity. More than that actually, in my mind this is a collection of people of who have really evolved past and matured beyond the consumerism that most of us have grown up with. They have found a way to step past the smoke and mirrors and really see that the pipe dream being sold isn’t a recipe for happiness. These people are role models.

The first chapters explore some of the reasons why people evolve into a life of simplicity. Perhaps they became ill, they lost their job unexpectedly, they started a family, they were extraordinarily stressed, they lost someone they loved, etc. The in delves into personal stories of people living this life. The most surprising thing to me was that voluntary simplicity wasn’t all about being frugal or doing with less. Sometimes it might mean just getting a job closer to home so you have more free time. Perhaps it means selling a large house that sucks up your time with house cleaning and maintenance to buy a smaller one. Maybe it means that you stop spending your money on things and you are start spending it on experiences. It is really more about finding out what you want in life, drawing a straight line to your goal, and then finding out how you can resolve the zig-zaggy, going in circles path you inadvertently chose to get to the same place. It could mean living more frugally and learning to overcome materialism but it could also mean letting go of a fast paced, multi-tasking, way of life too.

It had stories of high powered corporate attorneys doing a 180. One dad decided to quit his job and simplify after his daughter drew a family picture with the back of daddy’s head showing because that is all she ever saw as he worked every night on his computer. A socialite and divorcee sold her McMansion to buy a tiny condo on the beach. Another couple moved into a commune to learn homesteading skills and then they bought their own 40 acre ranch where they could grow their own food and unschool their kids. There are many inspirational stories in this book. I really enjoyed it because this is an area that I struggle with. ;)