↑
You are here: Home / Book Reviews / Emergency – This Book Will Save Your Life 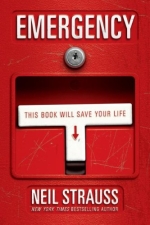 This book was a really fun read for me. It is Emergency: This Book Will Save Your Life by Neil Strauss. When I picked it up and read some of the chapter titles like “How to Protect Yourself from Inflation, Hackers, and Celine Dion” or “Surviving Snipers, Dirty Bombs, and Salad Bars” I expected a funny book that would be “light” on useful information. But come on those titles are hilarious…I had to read it. I am glad I did.

Neil Strauss is a writer and author. He has written for Rolling Stone and for the New York Times on many occasions. In the late 90s he started to become disullusioned with the US and in 2004 after Bush was re-elected…I think he went a little nuts. Yeah…I know the feeling. Strauss decided that the US may be on a collision course with disaster and he wanted an escape plan. If and when TSHTF (look it up if you don’t know what it means) he wanted a way to get the heck out of dodge and be able to survive in the aftermath of anything that came whether it be terrorism, chemical warfare, or complete economic collapse.

What began is the journey he outlines in this book which was well… awesome! He had one heck of an adventure and went from being a spoiled big city guy who lived on take out food to being what he describes as a REAL man… one that could take care of himself and survive in situations that most people nowadays would not be able to. Pretty much ALL the skills he acquired were brand new to him and very scary for him to pursue. It made for one great ride though, for him and for the reader of this book. Although a small warning is in order. The prologue was a little gruesome and since I had formed no attachment to the book I almost quit reading. Luckily before it got too bad it stopped so that the majority of the book could then explain how he had gotten to the point he had in the prologue. People who are sensitive to “hunting” details are warned.

He did soooo much in his journey to being a survivalist but here are some of the major things:

He went through gun training and got concealed and open carry permits.

He learned to ride a motorcycle and bought a military grade bike.

He went through intensive survival training and learned to survive in the woods for any length of time with only the clothes on his back.

He went through urban evasion training, learning how to pick locks, hot wire cars, break padlocks open, get out of virtually any restraint including handcuffs, and create caches with survival supplies and disguises.

He learned to hunt and fish.

He learned to grow his own food and raise and breed livestock.

He learned to track animals and humans over virtually any terrain.

He obtained citizenship and a home in another country. He also opened up an overseas bank account.

That only covers a portion of it too. The book basically follows him on this long journey and he shares with the readers his fears and his failures. It is also full of many hilarious yet scary moments, such as when he disguises himself as a woman to evade bounty hunters and nearly get his behind kicked by thugs who didn’t take kindly to finding a cross dresser in the men’s bathroom. Or when he has to get out of handcuffs and the trunk of a car. Yet it also has sad moments such as when he is called to the scene of that horrible train on train crash last year in California.

If you want a fun and clever weekend read this is a good one. And if you want to learn more about survivalism and having an “escape” plan then this might be your how-to guide. ;)