↑
You are here: Home / Environment / Earth Movie from Disney Nature 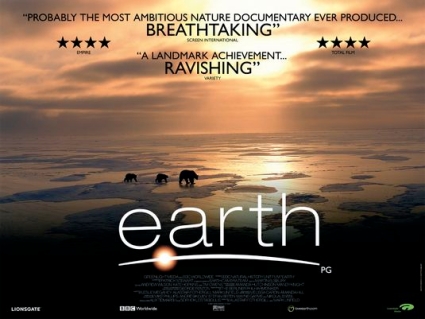 I am super excited about a new movie being released on Earth Day. The kids and I have been seeing in-theatre trailers for months and we plan on spending a portion of Earth Day in theatres this year.

This movie is the first release from the new Disneynature label. Earth is narrated by James Earl Jones, and tells the remarkable story of three animal families and their amazing journey across the planet we all share.  Directors Alastair Fothergill and Mark Linfield, the acclaimed creative team behind the Emmy Award-winning “Planet Earth” series combine forces again to bring this epic adventure to the big screen, beginning Earth Day 2009.

I am a big fan of Disney films already so I love that they are combining some of my favorite things into one awesome package…movies, family fun, and the environment. And is it just me or does everyone get crazy goosebumps whenever they hear James Earl Jones??? Plus, Disneynature recently announced that it will plant a tree in the highly endangered Brazilian Atlantic Rain Forest in honor of every person who sees the film its first week.

We will let you know our thoughts of the movie on Earth Day but until then
you can enjoy a piece of it at home. Check out the official trailer before you go. It rocks!