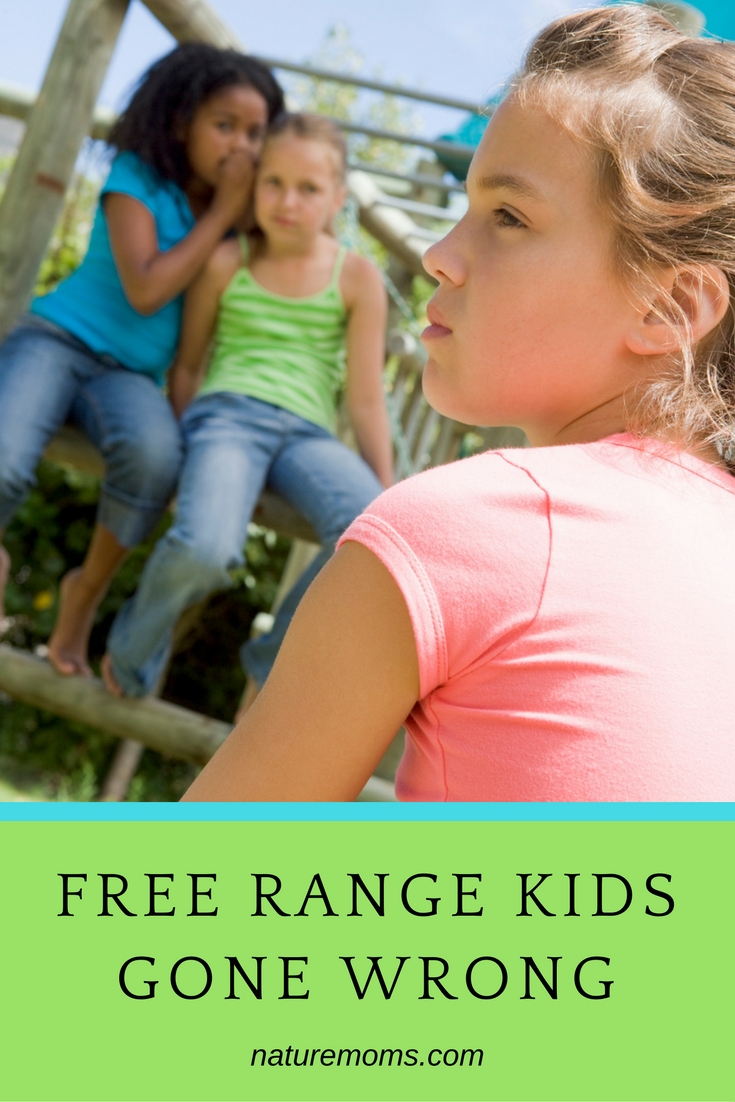 I have been reading TONS lately about free range kids. It is a book and a concept that seems to picking up momentum. When I look closer at the way I parent, I feel I have pretty much always allowed my kids to be free range kids. Of course my younger two have fewer freedoms than their older sibling but how wide you let your kids roam is an age appropriate consideration too.

I wrote not long ago about how we royally pissed off a neighbor because he couldn’t stand the fact that my son roams. It was causing problems with his own children as they were not allowed to go past their own driveway or play at anyone else’s home. Luckily that family moved a few weeks ago.

But they have been replaced by another family across the street. These kids have greater freedom but they cannot leave our street and often times can’t even play outside unless a parent is also outside. Jealousy prompted them to start teasing and taunting as my son rode past on his bike and now we have animosity again. Grrr…

So I would say I am more free range-y than most parents nowadays and that in itself paints a target on your back. BUT I have also witnessed something I consider slightly disturbing on several blogs of late… parents using the free range kids concept as an excuse for not supervising their kids when in fact they should be.

Maybe I am an anomaly but I am big on free range kids AND parental involvement and responsibility.. they don’t have to be mutually exclusive concepts. I have read on the Free Range Kids blog and on other sites, complaints from parents about rules in public and private establishments that require parents to supervise children. Specifically the two places I recall are museums and libraries.

Call me a crazy militant mom but museums and libraries are not exactly the best places to let your kids go unsupervised. There will of course always be exceptions depending on the maturity and temperament of individual children but in general these are places where parental supervision is a good thing. You don’t need to be a helicopter parent and hover over them but dropping them off for hours or otherwise letting them have the run of the place while you go elsewhere is not fair to other patrons or the employees of these places unless you are 100% positive they won’t be bothering other people. Librarians and museum staff aren’t babysitters.

A couple weeks back we went to Science Museum and there was a virtual game my son wanted to play with me. For two hours we scoped out the game at different times and finally gave up. Why? The same two kids played the game for over 2 hours. This is an exhibit that many other guests likely wanted to try but because these kids were not supervised they did not see the need to share the exhibit with other patrons. Would my kids do the same? Maybe! If it was a lot of fun I am sure they would want to keep playing. That is why it is important that I be there to make sure they are being respectful of other guests who likely paid around $50 (family of 5) for their short time there. It important for parents to be with kids to model these societal mannerisms. Perhaps that is why so many people have no respect for others nowadays… their parents weren’t “present” to teach them.

Libraries are another place were other people may not want to be disturbed by kids riding the elevator or playing hide and go seek in the reference section.. and rightly so. Free range parenting should include making sure your kids are being respectful of other people and honestly how can you know what is going on if you aren’t watching? Should we just hope for the best? A middle ground needs to be sought and getting upset because your local library won’t let your six year old hang out there without adult supervision is a bit much.

Today though I had my free range meter tested majorly. My son and two friends rode their bikes down to the elementary school playground and they ran into some teens that were hanging out there. The teens ordered the younger kids to leave the playground, which the other two boys did immediately but the these teens had an eye for my son’s dirt bike and they took it and proceeded to ride around on it, all the while insisting he leave. He wasn’t about to leave his bike which is exactly what they wanted. I guess maybe then they could consider it abandoned instead of owning up to theft…. which is what they were attempting. He ended up getting pelted hard with mulch chips which cut his face all up and they pushed him down and he hit his back on a slide as he went down, and then they kicked his bike chain and broke it. After all that they left, perhaps deciding that if they got caught now they assaulted someone and destroyed property. My son walked his bike home, his soul battered, in the hot sun.

Sadly, now my instinct is not to let him go back there. I am not worried about the remote chances of his being abducted or molested by a pedophile. I am worried about the very real possibility that he will encounter more bullies whose own parents probably have no idea where their kids are and probably don’t much care.

Sometimes the most dangerous things out there.. are the other kids.

So how do let kids roam without having to worry they will become victims? Are public places like libraries and museums the best places to let your children roam free? How do find balance?