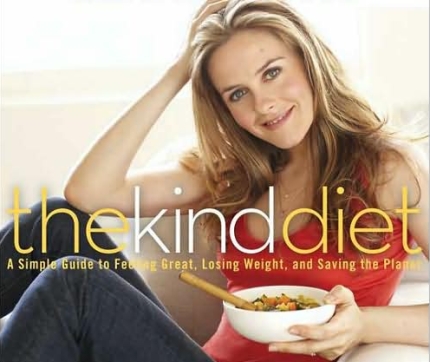 All finished devouring The Kind Diet and it is WONDERFUL!

This is a book I just heard about last week and hit “buy now” in 2.5 seconds. Why? Well, no doubt it has to be my admiration for the author, actress Alicia Silverstone in combination with my love for the topic… healthier food.

I grew up watching and admiring Alicia and was super stoked to see that instead of becoming a Hollywood party girl she decided to use her stardom to do good things and support important causes. She became an animal rights activist and a vegan. She is also incredibly beautiful and if a picture says a thousand words than it surely says many hundred about how healthy and vibrant Alicia looks. Hair and nails say a lot of about a person’s inner health. Many times I see vegans with yellow, dingy nails or brittle straw hair but that is so not the case here. Alicia is the poster child for how a vegan can look and feel if they are doing it right.

Alicia is vegan, she avoids processed foods and “white stuff”, she incorporates raw foods, and she eats in alignment with macrobiotics. She describes the entire journey in her book and it is fascinating. Such as when she was a vegan with full blown acne sitting in a macrobiotic nutrition coaching session she had bought for her husband. The coach noticed her acne and told her she needed to try macrobiotics too… and Alicia never looked back.

I love how she described finding what made her body feel best. That is important in a world where so many nutrition experts have varying ideas of what is healthy. I was also enjoyed reading about macrobiotics again. I kind of dismissed macrobiotics when I started eating more raw foods cause who wants raw grains and beans ya know? Well, around the time I got this book I started making more grain and beans. All week we have eaten Quinoa, brown rice, beans, etc  for our biggest meal and then raw and green smoothies for the rest. I have had so much power and energy I have felt like I could take flight… and I really missed beans.

Last night we had brown rice bowls with black beans, kidney beans, cilantro, onions, tomato, garlic, and cumin. It was sensational! My hubby asked me to make the whole meal again, 5 minutes after we ate it up, so he could eat it at work the next day.

As Alicia did we have a hard time eating raw in winter months. We feel cold and the food has traveled so far it is less nourishing by the time it gets to us. We may feel differently next winter when we, if all goes as planned, will be living through much warmer winters. But for now, this cold weather body is screaming for a vegan macrobiotic diet and I will listen to it. Macrobiotics for anyone not familiar.. well I sum it up as a plant based diet based on whole grains, beans, and veggies. Sounds like a good winter plan to me… combined with raw desserts, raw salads, and lots of green smoothies of course.

The first half of The Kind Diet goes through Alicia’s personal journey and it explains why things like meat, dairy, white sugar and flour, and all that jazz is stuff you should give up. Much of it is health information and much of it is animal cruelty info. It is called the Kind Diet because it is kinder to our bodies and to our planet to eat this way. While some may debate the first part, the second part cannot be disputed. Just this week it finally clicked with me that buying milk from store is supporting the veal industry.

You might think you are doing your part by not buying veal but if you buy milk.. you are contributing to the mistreatment of baby calves. All the boy babies at the dairy farms are sent to become veal. :( Just this month the HSUS exposed a veal factory in Vermont that was beating calves, shocking them over and over, and even starting to skin them while they were alive. The book also reminded me of disturbing facts that I had forgotten like the fact that cows can live 20-25 years but in a dairy farm they only live 5-7 years because of the abuse and torture their body is put through.

It just makes you take a hard look at what we eat as a society and eliminates any doubt that we ARE being cruel by supporting factory farming of meat, eggs, and dairy. And we don’t need it anyway, which makes it worse.

Anyway I love the book and I love Alicia Silverstone! What I love the most is that she doesn’t get preachy. She just shares the facts and lets you decide. She also has three levels to reach for in her book… flirting, vegan, and superstar. I think she takes the right approach in making the flirting approach easy to manage so that people get a taste of feeling better and WANT to go further. And when you see how real and vibrant, and gorgeous Alicia is you can’t help but think… I want to feel that way or look that way. Her hubby is in the book often as well and he is a vegan cutie too.

Enjoy the book and the video below!