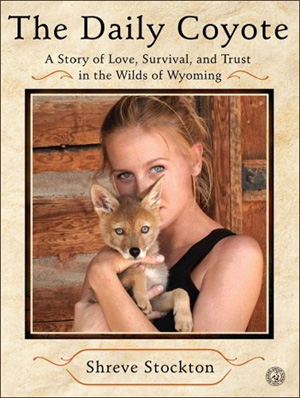 Just before Christmas I got a gift certificate to Borders from my brother. Instead of waiting until after Christmas to use it I braved the crowds and bought a couple books to read over the holiday. One of those purchases was The Daily Coyote – A Story of Love, Survival, and Trust in the Wilds of Wyoming. The cover and title called to me from across the store.

This book is a fantastic true story that hooked me from page one. It makes you examine things that you long thought you had your mind made up about and it made me feel rather tiny in the presence of such bravery and bravado. Shreve Stockton is a woman after my own heart.. a kindred soul that I recognize on some deep level. She is a New Yorker turned cowgirl who literally runs with coyotes (or a coyote – singular I should say).

The story is told by Shreve about how she traveled from San Francisco back to her beloved New York City … alone… on a Vespa. Her journey took her through Wyoming where she felt her heart being called home. Thinking she would get over it as soon as she got to NYC she continued along but after a week she knew she had to move to Wyoming and she did. A few weeks later she was renting a ranch home with acreage and helping a local cowboy feed his cattle. The way she described the people and pace of life is very alluring. Also very familiar to what I experienced when I moved from Phoenix, AZ to an 80 acre farm in rural Ohio. I often think about those days.. walks down country lanes, tending to livestock, the way people drop by to visit with you, strangers waving to you from their cars….

Anyway, Shreve adopts a coyote pup whose parents were shot for killing sheep. And so her amazing journey begins, living in a 12×12 log home with a tin roof with no indoor plumbing and only  a wood burning stove to stay warm in the harsh winters, with her cat Eli and her coyote Charlie. In a world where coyotes are seen as menaces to be killed on sight, she chooses to raise one. In a world where cats and coyotes are prey and predator Eli and Charlie become friends. Not everything goes smoothly which makes the journey even more remarkable and touching. I also loved that she is a blogger and photographer.

If you are looking for a great story this one is a winner. I would not be surprised if this gets made into a movie in the future. It is like White Fang except with a woman and a coyote and its true a story. Enjoy!