↑
You are here: Home / A Green Home / Doing More and Buying Less 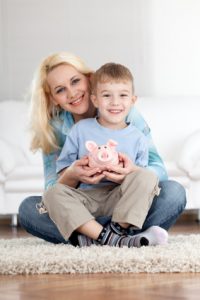 I was reading an article last week on The New York Times about this subject. It chronicles the life of several families who were impacted by the economic recession and found they couldn’t live the lifestyle that they used to. They got creative and found ways to make their lives even “richer” with less money. This is one of my favorite topics because I truly do believe that we can all live a lifestyle of frugal luxury, a term I fell in love with after reading this amazing book. Here is a blurb from that review:

A mental image from one of the chapters has always stuck with since I first read this book over a year ago. It talked about a family living in an abandoned wood shack. A group of charity workers heard someone was living in it and decided to stop by and leave food for the family. When they went inside they were stunned by what they saw. The wood floor was scrubbed until it gleamed and was covered with wood wax. A fire was burning in an old river rock fireplace and on the hearth sat a pot of simmering apples and cinnamon that made the place smell divine. A spool discarded by the cable company served as their table and it was adorned with floor length green and white checked gingham cloth. Simple curtains made from the same fabric covered their windows and hung from willow branches. A garland of evergreen and pine cones hung from the ceiling like a wallpaper border. They sat on fruit crates topped with red cushions and their guests were treated like royalty when they stopped by.

My own family has greatly simplified over the years and become quite content with those frugal luxuries. As do many young families we started out in debt because we didn’t feel the need to start from scratch as most young couples used to do. When we struck out on our own we used credit cards to accumulate all the “stuff” we had when we lived with our parents. We never stopped to think that our parents had worked years to accumulate all that they had… for some reason we felt we needed it all right away. Our kids were showered with toys… I never once (seriously) went to a store with the kids and failed to buy them something. They got used to getting whatever it is they wanted. I had a very “disposable” mentality and even then it drove my husband kinda nuts. If the kids destroyed something or something got really dirty I would propose we just go buy a new one. I would throw CDs down on the floor of the car and just think that if it got scratched and started skipping, I would just go buy another.

Were were drowning in stuff, creating massive amounts of waste, we were deep in debt, and big surprise we weren’t really happy because we wanted more.

Things changed when I quit my job to stay home with my kids (only two then). We simply had to make do with less because we were a one income family and I was also pretty much a single parent since my husband’s job was as an over the road trucker driver trainer. Ironically we both work now and still make way less than what he made alone back then and it seemed like such a hardship to manage to get by, LOL. I started a cloth diaper business for play money and that lead me to attachment parents (who were a big part of my customer base). Being a marketer I knew I had to understand my customers and I guess I drank the koolaid because I found my tribe. When I re-evaluated the coersive parenting style that I had originally fallen into (and was unsatisfied with) I found that I had to model the behavior I wanted my kids to learn and frankly I was selfish, wasteful, greedy, and ignorant. That wasn’t the role model I wanted to leave for them. I didn’t want them to grow up thinking that “things” made you happy and that our lifestyle choices had no impact on the people and planet around us. So I had to learn to embrace those things myself. Getting cancer helped that process along as you can imagine… simply being grateful you get to live can be an eye opener to the things that are truly important.

Adopting a more simplistic life and attitude has literally been the best thing that ever happened to us. Our recession moment didn’t hit last year. It happened the year before that when we decided my husband had worked on the road for too long. He quit his job and came home to a new one which paid him half as much. He works a 9 to 5 job now and I work at home. We make less money (about 30 grand less) but we don’t struggle. We eat better than we ever did back then and the kids have far less toys (at least new toys) but they have more of our attention and more “experiences” than they had before. I don’t have a brand new car car anymore, instead I have a used model that is ten years old and my husband drives that every day so I have been borrowing an old truck to take the kids back and forth to school on super cold days. I shop at thrift stores now for clothes, toys, and furnishings. I search Craigslist for bigger items that I think we need but 8 times out of 10 I end up deciding we don’t NEED the stuff after all.This week I was trying to organize my daughter’s books which have always just sat piled up on the floor in this house because our old house had built-in bookshelves (I miss them). I wanted to buy bookshelves but our local thrift store had nothing so I shopped in our garage hoping to find cinder blocks and planks of wood. Instead I found this: 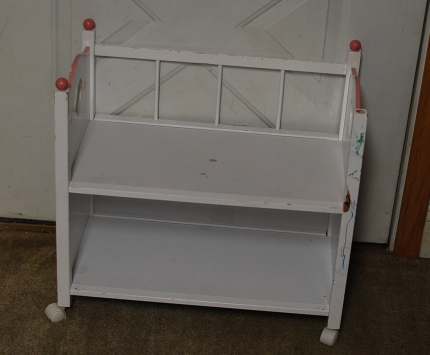 This is a baby doll crib I bought for $5 at a yard sale and my daughter broke one of the rails off and both doors off. She also marked all over it with permanent marker. So it has been sitting in our garage for months. I looked at it and suddenly saw a rolling bookshelf. I painted it ballet slipper pink and put it in my daughter’s room for a bookshelf. We also decided that if this thing gets filled we will need to start donating books. 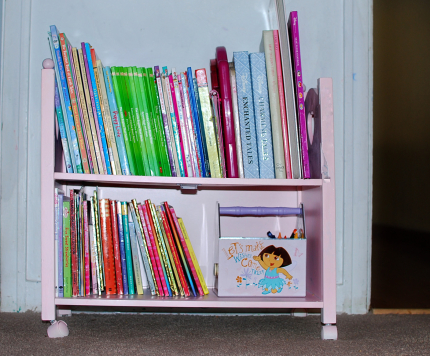 Does it look as nice as store bought shelves? Uh.. no but it is functional, cute, and it has a story. I think the $5 was well spent.

Its been a long journey but most days I feel truly rich. We have everything we need. The only thing I miss from days gone by is travel. I have fond memories of trekking around with my oldest son in a sling on my back as we hopped subways in New York City, rode the waves in Miami, or explored museums in Chicago. We want to add travel back into our lives and plan to do so as my income grows since I can do my work from my home office or a rented condo in Costa Rica. My parents will also be retiring soon and will be traveling and we want to accompany them when we can. But of course now we want to travel modestly, simply, frugally, and as sustainably as possible. But yet we do still go to amazing places.. state parks, waterfalls in the city, covered bridges, historic monuments, etc. We aren’t missing out on seeing amazing things.

There is a whole new world of possibilities when you decide that you can do more with your life even if you don’t have much money.