↑
You are here: Home / A Green Home / I Love Nature But Do I Have to Love Spiders? 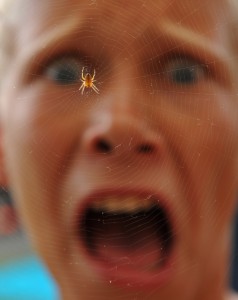 The other day I was watching my daughter play outside and she started to freak out about a bee. If it wasn’t a bee it would have been a bug. She HATES the creepy crawlies and I can’t blame her since I was the same way. It was well into my adult years that I started to accept them and not shriek and jump onto the nearest high surface. I wish I could say I had bad experiences that made me that way, and I did get bit by black widow spiders a couple times but overall I have to say that I was just born being afraid of bugs and crawly things. My parents used to joke that they could send me into any room and I would find a bug.. even if it was the size of a flea… I would find one and scream.

Nowadays I wouldn’t say I love them but I can tolerate them and for the sake of my daughter I try to make bugs seem like a fun part of nature. I want her to see a female who thinks bugs and spiders are cool, not something to be terrified of. Yesterday that meant going outside to check the mud and puddles in the yard for worms. This morning was another worm hunt. I even assisted my toddler in trying to sneak one to school but alas the bus driver caught us and gave me the evil eye. As soon as she heard him say the word “worm” she got ghostly white and almost physically pushed him away to arms length and demanded to know if he had a worm. That is the look I don’t want my kids to see..  the look that says that nature and bugs are gross, dirty, nasty, scary, etc. That takes me out of my comfort zone sometimes but the things we do for our children…

Half the battle is won by learning about how beneficial bugs and spiders are. If you take the time to learn, you develop respect and you see why they are important parts of the ecosystem. When you are outside and you see a particular bug or spider see if you can identify it on the Internet and learn about it. Demystifying and naming certain critters is half the battle. Kids are afraid of the unknown and once they “get to know” the local wildlife they will be more comfortable.

Take the Orb-Weavers for instance. They are spiders that weave large, beautiful webs that sometimes look as if they have writing down the middle (hence another name for these yellow-and-black striped beauties: writing spider). These spiders are quite large, and their elaborate webs are lethal to all kinds of flying pests, such as mosquitoes, moths, wasps, hornets, etc. Such webs can be annoying to humans, but there are few things more breath-taking than one of these orb webs covered in dew drops on a sunny morning. They kill the bugs I don’t particularly like.. mosquitoes and wasps, and they are gorgeous spiders, even if slightly terrifying looking. I leave them alone and they leave me alone. That is the major lesson I impart to my kids… they have a job to do and we need to leave them to it.

I don’t like spiders and bugs in the house so the kids and I talk about what kind of things WE do that makes spiders want to come in the house… aka leaving clutter on the floor for them to hide in, leaving food and crumbs on the floor, poking holes in screens, etc. I find it is an excellent incentive to my kids to clean up after themselves when they think about bugs crawling around in their rooms at night. It is incentive for me too. After finding two huge spiders in the laundry I was piling on the floor, I converted to a system that kept clothes OFF the floor, LOL. For more tips check out my article on how to get rid of spiders naturally. It mostly talks about spiders but also some insects.

Because we want to be left alone in our home we take preventive measures and we have to respect that the outdoors is their domain. To respect existing spiders in our yard we do not spray broad-spectrum insecticides (spiders are not insects, but they will succumb to insect sprays). If we spray anything, it is usually natural and geared towards one problem insect that is eating our crops. We never spray herbicides to kill weeds either. Another thing you can do is spread thick mulch that gives hunting spiders a place to hide and spend the winter. Encourage web-weavers with an outside light that attracts flying insects. Spiders will weave their webs near the light to take advantage of the bugs.

Some good books to read with your kids about spiders and bugs:

The Looking Book – A very clever book a mom who gives her kids some “lookers” and sends them on an assignment in their backyard. My kids like this one a lot.

Are you a Spider? – Walk a mile in a spiders web.

Aaaarrgghh! Spider! – An adorable book about a spider who wants to be the family pet but she keeps getting swept outside.