↑
You are here: Home / Health & Healing / When Doctors Try to Blackmail Parents 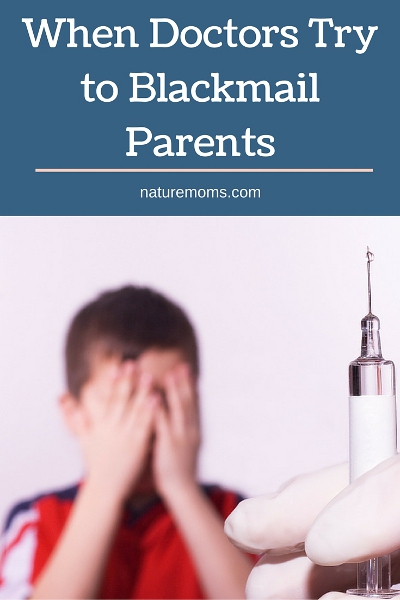 It has been a rough few weeks moving into our new digs. Part of the issue was getting the kids registered for school. The process was so tedious I thought we would be asked for DNA samples. AND getting my preschooler back into a special needs preschool was like pulling teeth. They were all but ready to refuse him because they wanted a doctor’s note saying he was healthy despite our decision not to vaccinate… which I am pretty sure violates the law since I had given them a copy of a form stating that I was invoking the philosophical exemption law guaranteed by the state of Ohio.

BUT I decided to take him to a doctor to speed up the process and that was yet another disaster. The doctor told us he would be happy to fill out our paperwork but would never see us again because we refuse to vaccinate. Then the man held the paperwork hostage for 30 minutes or so until he could lecture me about my poor choices. I related to him that my oldest had been injured and almost killed by a vaccine and that this was confirmed by two pediatric neurologists AND we were told not to vaccinate him again. This new doctor, who has never met my older son and has never looked at his medical history said this was all lies. Either I was lying or these doctors were quacks.

I was quite angry after that and went on tirade about vaccine risks. The doctor replied that vaccines have NO risks. ZERO risk. At that point I started to think the man was a blooming idiot. I politely asked why it was that each vaccine comes with an insert outlining all the CONFIRMED risks associated with each vaccine as documented in drug trials. His response… the flyers are full of made up stuff so that vaccine companies can cover their bases. Really? Death is listed as a risk just for kicks and giggles? Yes, despite this man’s medical degree he was an idiot… who had clearly never researched vaccines beyond the one week he went through them in class or the indoctrination he managed to absorb at medical conventions.

I asked why he felt that refusing to see unvaccinated kids was ethical. Did they not deserve medical care? He declared that medical doctors are banding together and refusing to see these families because they feel it will force parents to reconsider their bad choices. Oh blackmail? No, he said with a smug smile, it isn’t blackmail if what they are doing is BEST for the children. Wow…

Of course by that point I knew the guy was a total creep and never wanted my kids to see him again either. Yet this is the second time we have been booted out of a practice for failure to vaccinate. This is definitely an alarming trend.

I still want to establish a relationship with a family doctor so my kids can participate in organized sports and other recreational programs that require annual physicals. And since medical society is steadily leaning towards the idea that non-vaccinating parents are neglectful parents, it never hurts to make sure you have one your side to establish that you ARE in fact making educated choices and that you do care very much about your kids health. We may just look for a family doc instead of a pediatrician and Dr Sear’s web site has several suggestions for my state.

The whole experience had me feeling kind of low, as I am sure this man intended, but then I remembered all the ways I am working to keep my kids healthy:

* By not injecting them with chemical cocktails called vaccines!

* By letting food be their medicine.

* By feeding them a nourishing diet that is short on grains and refined sugars, and full of things like pastured eggs, pastured milk, grassfed meat, daily batches of dark leafy greens and fruit in green smoothies, healthy fats and proteins from nuts, seeds, seaweed, and cultured and living foods like fresh yogurt and kefir.

* By feeding them local foods and raw foods that have more of their nutrition intact and organics that do not have pesticides whenever I can.

* By avoiding processed foods that have preservatives, dyes, and other chemical nasties that do not belong in food.

* By providing them with daily opportunities to play out in the sun and fresh air.

* By treating illnesses and injuries with homeopathics.

* By not sterilizing their environment with antibacterial products. Kids need to get sick and build a good immune system!

* By providing them with a green and natural home that does not use toxic cleaners or other products that leach into the air as pollution or into their food.

After remembering all of that, which the doctor had no knowledge of and frankly didn’t care about… I finally remembered that Mom does know best. My kids are very healthy and that is precisely because we choose NOT to go along with conventional wisdom in regards to food and medicine.

Related Reading: He’s Not Autistic, But… How We Pulled Our Son From the Mouth of the Abyss & How to Raise a Healthy Child in Spite of Your Doctor