↑
You are here: Home / Environment / Chewing Gum – Harmless or Toxic? 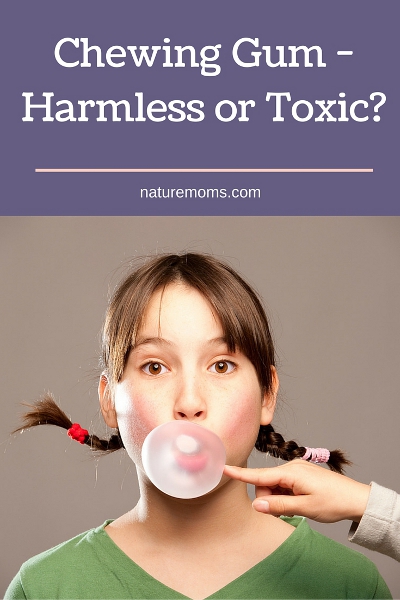 For awhile now I have had a no gum rule for my kids. Thankfully it isn’t a real big issue since none of us were ever big gum chewers but when Halloween rolls around I need to be vigilant about gum. It has nothing to do with cavities or sugar though. It is instead about choosing that they NOT chew on plastic. Plastic has all kinds of chemical and toxic nasties and in true bone-head fashion we decided to take a relatively normal and natural product (gum) and plasticize it. Well, no thanks.

Native Americans chewed the sap from spruce trees and thus introduced us to “gun chewing” many, many years ago. During the first days of gum mass production, gum was made from chicle, which is a natural latex sourced from the sap of the Sapodilla tree. But after WWII, innovators decided to make a synthetic rubber for gum instead. A typical gum base will generally have ingredients like polyvinyl acetate (plastic) among many others. The problem is that we are essentially chewing big gummy balls of chemical laden rubber, dipped in sugars and sweeteners, when we chew conventional gums. Sounds delicious right?

Canada took steps at one point to get polyvinyl acetate listed as toxic after studies showed it was a likely carcinogen but the gum manufacturers played hardball and won out. A preservative called hydroxyanisol (BHA) is also often found in gum and it IS listed as a “reasonably anticipated’ carcinogen but that does not stop minute amounts of it from being allowed in chewing gum. Apparently this is just another industry where the ideals of capitalism are proven false and apparently money is all that is required to make selling poisonous products, perfectly legal. I should mention that the company behind Glee still uses chicle in their gum and they deserve big props for that. However I still won’t let my kids chew it because they do use some of these chemicals in their formulation.

And of course there is the environmental aspect. The gum the natives chewed and the gum made from Chicle was natural and eventually decomposed. Modern chewing gum is non-biodegradeable!

Think about how much gum you have chewed in your lifetime. You probably never gave it much thought when you wrapped it up in a piece of paper or a tissue and then tossed it in the garbage. That gum is still around though… somewhere, and probably looks pretty much the same as when you tossed it. Some countries, like Singapore, have even banned it. Others have established programs (cool link BTW) to collect and reuse (recycle) chewing gum to make new products.

If your own kids have gotten into the habit of chewing gum you may be able to convert them over to something else, like taffy or ginger chews. Or when they ask for gum in the store you can just get creative and offer them something else instead. When they go Trick or Treating perhaps you could make a deal and trade the gum for other candy or for a small bit of money. My kids now automatically know that the gum should be declined, traded, or tossed if given to them.

One clever way you might educate your kids about gum is to give them a Make Your Own Gum Kit that uses natural chicle. You could show them how gum used to be made, tell them how it is NOW made, and then discuss the health and environmental impact of gum while they have fun making some of their own flavored gum.

Have you and/or your kids made a habit of chewing gum? What have you done to avoid it?