↑
You are here: Home / Birth & Baby / Breastmilk is Superfood for Babies 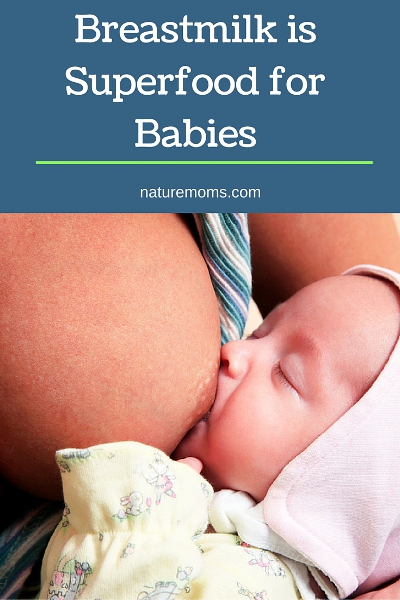 It has been quite awhile since I breastfed my little ones but even so it is one of those subjects that I am still deeply passionate and opinionated about. From the time my youngest was born I knew I would breastfeed and mostly that was because my own mother had. I recall her breastfeeding my younger brother well into his toddler years and she talked about the joy of breastfeeding so enthusiastically that I knew I had do the same when I became a mother. This made me the odd one out among my friends and peers but I also found that I truly enjoyed the whole breastfeeding experience and I fed my oldest child this way until I had to return to work, about four months after his birth.

Weaning him so early became a big regret for me when he developed health problems a short time later. His health problems were so severe that that I waited three years to have another child and I was determined from the get go that this child would be breastfed exclusively and for an extended period of time. I had plenty of time to research all the reasons why breast is best and I wasn’t going to let modern life get in the way of of feeding my child the absolute best food. Not this time, no way. I quit my job and really never looked back. That was nine years ago this week. I breastfed my daughter for 2.5 years with the last 6 months of that being done in tandem with her little brother. Every moment breastfeeding her was special and joyous just as my mother described. I like to think that all the time she spent at the breast gave her a great start in life. It makes me so sad that many mothers and babies do not experience this and that so so many cultures are not supportive of this all important aspect of raising children.

BREAST IS BEST. By now this should be a widely known fact and all women should be be educated about why breastfeeding  is not only 100% normal and natural but also extremely important for the health of their children. I will be honest that I get more than a little peeved by prevailing attitudes about breastfeeding in the US but I just have to hope that most of it is lack of education and that it can someday be remedied.

This is why a new report from Save the Children was of great interest to me and I want to share it here. Quite simply it highlights the fact that breastmilk is superfood for babies and that it saves lives. The report talks about the ‘power of the first hour’ and they estimate that 830,000 infant deaths could be avoided if every baby were breastfed within the first hour of life. Much of this has to do with colostrum, which is the first milk. It is the most potent natural immune system booster known to science.

Other stats from the report:

* An infant given breast milk within an hour of birth is up to three times more likely to survive than one breastfed a day later.

*An estimated 1.4 million child deaths in 2008 were as a result of ‘sub-optimal’ breastfeeding, where babies were not exclusively breastfed and where breastfeeding did not continue into the second year.

* Breastfeeding rates have actually stagnated around the world over the last 20 years – and remain below 40% globally.

* Four major barriers to breastfeeding around the world: 1) cultural and community pressures 2) the health worker shortage 3) lack of maternity legislation, and 4) aggressive marketing of breast-milk substitutes – or formula.

* Only 6.7% of U.S. births occur in designated 154 “Baby-Friendly” facilities that meet international recommendations for supporting breastfeeding, and the U.S. has the weakest levels of maternity legislation in the industrialized world.

This shows without a doubt how powerful the act of breastfeeding can be and how it impacts the health of our children. It also shows why we must get better about educating women about what it actually means when they choose NOT to breastfeed and how the formula industry is working against their interests and against the health of their children. Here in the US part of that education process needs to be about making breastfeeding culturally normal. When you live in a society where restaurant or store employees ask breastfeeding mothers to leave these places of business and imply they are doing something gross or socially unacceptable by feeding their children, then we have HUGE problems. We must also make the work environment more family friendly so that working moms do not have to choose between being able to work or being able to feed their infant the best food available.

Other cultures have other issues. In India they believe that colostrum should be expressed before any breastfeeding can occur. This is a cultural practice that goes against science and best practices for health. It needs to be addressed. Other areas are affected by a health worker shortage. Even if you believe in home birthing and few, if any interventions, you are still likely to have a midwife and/or doula. Having health and birth workers around is so beneficial and often times they help young moms get established with breastfeeding because it can be a bit tricky sometimes. In developing countries this is even more important.

On addition to distributing this wonderful report, Save the Children is calling on Secretary of State Kerry to recommit to the 1,000 Days Partnership that expires in June. Since 2010, this international partnership has already helped countries such as Indonesia, Ethiopia, Bangladesh and Tanzania develop strategies around fighting childhood malnutrition through supporting breastfeeding and other important steps. It is set to expire unless we speak out and demand that the breastfeeding support and education continue. I signed the petition and I hope you will to.

I would also love to hear form you. What do you think we need to do to increase breastfeeding rates worldwide? Comment below if you want to share. Also be sure to check out the video below of how Brazil has had tremendous success with a breastfeeding initiative. It is such a powerful message and brought to us by actress Isla Fisher. I knew I really liked her!!