A new poll has been released that shares some interesting information about how moms feel about GMOs, or genetically modified foods. If large food corporations are banking on consumers not being informed about GMos or not caring if they are labeled then they are in for a rude awakening. Whether or not they are ready to admit it, these companies are vulnerable and if they are on the wrong side of this issue…well it won’t end well.

Lake Research Partners conducted the poll and it shows that customers want to know if their food contains GMO ingredients and they feel betrayed when companies seek to hide this information.

70% of moms declared they were less likely to buy from Quaker or parent company Pepsico when told that they are funneling millions of dollars towards initiatives designed to effectively block our right to know about GMOs. 93% want Quaker to label GMOs and 80% want them to stop trying to block label laws.

81% said they are less likely to buy from brands who sell food with GMO ingredients, which contributes to the increased use of toxic pesticides. Glyphosate, the primary herbicide used on GMO crops, is considered a probable human carcinogen by the World Health Organization.

We have been told for a long time that GMOs will help feed the world but any practice that increases the use of pesticides is not sustainable or practical to feed the world. I have also been told by several of my local farmers (who use GMO crops) that they do not produce more yield than conventional (non GMO) crops. We moms are very concerned about the chemicals our children are exposed to and if GMOs are being grown with heavy loads of potentially cancer causing chemicals…well, no thank you. If they aren’t producing MORE food than conventional growers then what is the point?????

Consumers are getting savvy. They are demanding truth in labeling and transparency about ingredients and practices. This trend will only continue and gain more steam. Brands need to rethink their current practices if they want to survive.

Join me in this revolution!

People all across the country are fed up with being kept in the dark. That’s why I’m working with Just Label It to bring the Conceal or Reveal campaign to Quaker’s doorstep. But we need your voice, too. 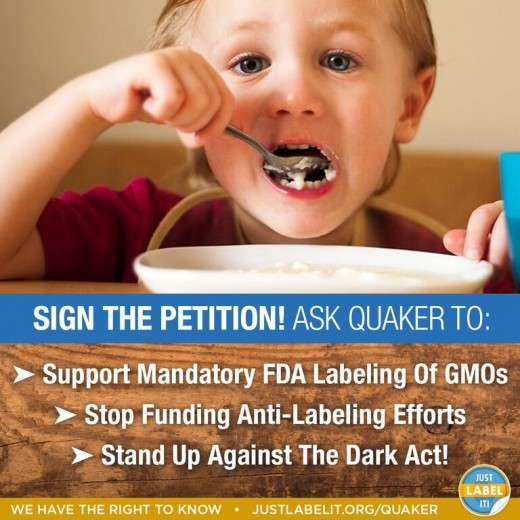 This post was created as part of the Just Label It campaign in which I am a financially compensated Labeling Advocate. Booyah! The opinions I share here are my own and based on my own world view.