↑
You are here: Home / Environment / Facts on Solar Power Today and What’s in Store for the Future 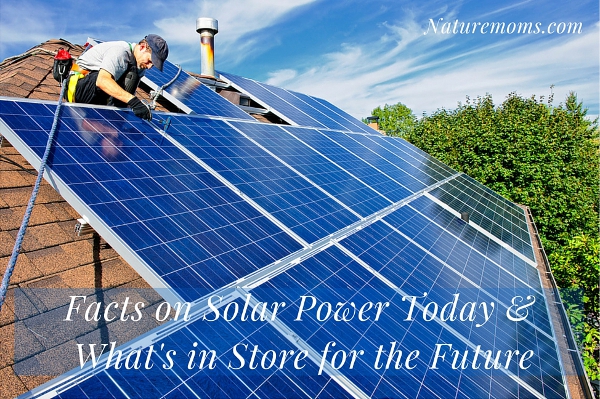 There is a lot of misinformation about what solar power is and how it can benefit people. These four facts will show you that solar is an important part of life today and in the future.

Fact One: Solar Gets More Affordable Every Year

A lot of people avoid solar energy because they don’t want the upfront costs of adding solar panels to their homes. While it’s true that there are some expenses associated with purchasing and installing solar panels and related equipment, it’s undeniable that solar power gets more affordable every year.

Some experts expect solar costs to fall by 40 percent by 2017. The technology has already become remarkably more efficient in recent years, and that trend is expected to continue into the foreseeable future.

Eventually, solar power may even become cheaper on a large scale than grid electricity generated from fossil fuels.

Many companies already offer affordable ways to add solar panels to your home. In most cases, you don’t have to pay the entire cost upfront. Instead, you can spread your payments over several years to make equipment more affordable.

Fact Two: Solar is the Planet’s Most Abundant Energy Resource

The sun bombards Earth with so much energy that, theoretically, it only takes 40 minutes to equal an entire year of consumption. The amount of solar energy that reaches Earth in one day could provide enough power to last 27 years.

People don’t currently have the technology to harness all that power, but solar panel designs come closer every year.

Solar is also a renewable resource that will never run out. As long as the sun shines, there is plenty of energy to go around. Homeowners just need the right technology to capture that energy and make it their own.

The use of fossil fuels introduces so much carbon into the atmosphere that it is ushering in a premature period of high temperatures. Reducing the amount of carbon and other pollution in the atmosphere is one of the only ways to avoid an incredibly hot future where crops die in the fields and ocean levels consume coastal cities.

Unfortunately, this isn’t something that people can kick down the road to future generations. Global warming is already happening and will have profound effects within just three decades.

Getting more energy from the sun would significantly reduce the amount of carbon in the atmosphere, and thus help prevent some of global warming’s worst effects.

Building solar panels and related equipment does create some pollution, but the benefits of solar quickly offset the effects. Current estimates show that somewhere between 87 and 97 percent of solar power will not create any pollution. That’s a benefit that no one can afford to ignore.

Fact Four: Solar Energy Has Been Used for Thousands of Years

Some people seem to get confused by solar technology. They ask what is solar energy? As if it is something completely new. It’s true that today’s solar panels can harness so much of the sun’s energy that there is enough leftover electricity to contribute to the grid, saving money and cutting carbon emissions. But people have used less advanced forms of solar energy for thousands of years.

During the seventh century B.C., people used magnifying glasses to intensify the sun’s rays and start fires. By the second century B.C., the Greeks had found a way to hone solar rays so well that they could set enemy ships on fire.

Of course, there were plenty of benign uses, too. Roman bathhouses were oriented toward the south so they could use the sun’s energy to warm water.

In a roundabout way, even the gas in your car is a type of solar energy, albeit a much dirtier version, since even fossil fuels are the result of ancient plant and animal life made possible by the sun.

The Future of Solar

Solar energy will keep getting more efficient. As other sources of energy start to dry up, solar will remain. The sooner you add solar power to your home, the sooner you can start reaping the benefits. As the technology improves, your home can keep improving with it. If you’re ready to take the leap and get some solar panels for your home or business, make sure to hire qualified professionals who can properly install and complete your renovation project.