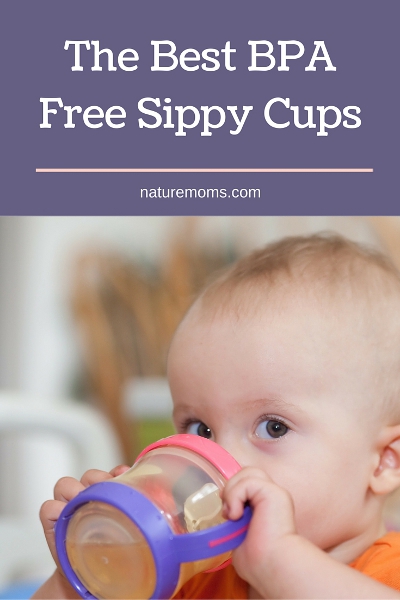 Read part two of this report here… & Check out my review on the New Glass Sippy.

By now you have probably heard about the big BPA or bisophenol debate. BPA is a nasty chemical most often found in polycarbonate plastics. These plastics are used many times to make products that are in a great many homes. I have posted about this issue a few times in the past but it is worth mentioning again.

So what is BPA and why should you be concerned? Bisphenol A is an estrogen-like chemical used to make plastic. You can find it in MANY products… water bottles, dental sealants, in the linings of most tin cans and in some of the most shocking places of all…in baby toys, baby bottles, and sippy cups. Companies have long known about this chemical’s ability to act like a hormone and they have always hidden behind the fact their specific product contains levels considered safe. Well, there is a fundamental flaw in this thinking…or rather a small detail they would like consumers to over look. We don’t just use “one” product. We may use many of the different products that contain BPA…tuna cans, baby bottles, sippy cups…and the cumulative exposure to this chemical is anything but safe. Just read an excerpt from a recent study below:

Bisphenol A manufacturers have said the trace amount leaching into food and beverages isn’t dangerous to people because it’s quickly metabolized into a form that loses its ability to act like a female sex hormone.

While the authors of the new assessment agreed that people break down some of the bisphenol A they absorb, they said since so many plastics and other products containing it are in use that “virtually everybody” in developed countries has chronic, low-level exposure to the chemical and measurable amounts of its biologically active version.

Typical readings are about two parts per billion in blood. Although this is an extremely small amount, hormones are active at this level, and at even lower concentrations.

Based on the amounts being found in people and what is known about the metabolism of bisphenol A from animal experiments, it also appears that human exposures are above the current U.S. safety limit, according to the assessment.

Another study done by the Environment California Research and Policy Center tested 5 popular baby bottles: Avent, Dr. Brown’s Evenflo, Gerber, and Playtex. ALL were shown to have unsafe levels of Bisphenol A. Sadly this is how many are starting out life for their precious babies…giving them toxic chemicals inadvertently. And to make matters even worse…if you use formula you are giving your baby a double whammy because the lining of those formula cans may very well be leaching BPA into the actual formula as well.

Many other studies have concluded the same thing BPA is unsafe. It can speed up puberty and add to weight gain, and may cause changes that can lead to breast and prostate cancer. Other studies have shown that is may cause brain damage, abnormal organ development, and hyperactivity. We must take steps to eliminate it from our lives to the extent we can. This is one BIG reason you need to store your food in glass containers and not plastic. It is also the reason you need to find safer alternatives for baby bottles and sippy cups.

I wrote an article about BPA free baby bottles if you recall. Glass baby bottles seem to be a new favorite among natural moms. Born Free is also quite popular. I did update that post recently to show a few other bottle choices for parents who wish to avoid BPA. I especially dig the new Nuby BPA free bottles.

As the parent of an older baby I am a bit more concerned with safe sippy cups myself. A glass sippy cup would be the best alternative but who is going to give a toddler or a mobile baby a glass cup? Not me!

So I decided to try several different BPA free sippy cups and see which ones made the grade. I reviewed the Klean Kanteen, Sigg, Born Free, Foogo, and Avent Naturally sippy cups/bottles. You will hear what I think and what my kids think. So let the battle begin….may the best sippy cup win. ;) 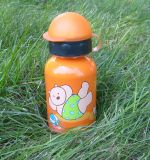 Sigg Baby Water Bottle (Price $14.95-16.95) – This great product is made by a Swiss company. This sippy bottle is made from aluminum and has a completely inert, water-based epoxy lining that does not leach harmful chemicals. Instead of an actual sippy spout it has one more like a sports bottle. It has a lid that clamps down over top of it to help avoid spills. They come in a variety of child pleasing styles so this bottle is anything but boring. My kids love the different choices available and overall they like this bottle. Although I have not had a problem with leaking I have some friends that have had issues. It is also pretty commonly known that these bottles will dent and chip if dropped a lot. My kids gave this cup an A+. I would give it an A-. 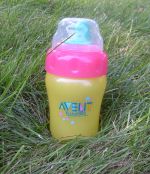 Avent Naturally Sippy Cup (Price $6.95)- Yes, it is made of plastic but not a variety which contains harmful chemicals like BPA. Although because it is made of plastic I knew this sippy cup would not be a favorite of mine. Plastic is always going to be slightly suspect to me…I can’t help it. We picked up this particular cup at Whole Foods. The cup is rather plain and ugly and we did have a few leak issues so I can’t even say that it did the job all that well. The lid also got lost pretty fast. My children would pass this one up in favor of one of their “cool” cups. They gave it an D. I gave it a C… it is BPA free and low in price.

Klean Kanteen Sippy Bottle (Price $16.95)- This sippy bottle is made of stainless steel which will 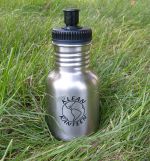 not leach harmful chemicals. I use this bottle myself (the adult version of course) and I REALLY like it. For the kids bottle you have two choices. You can get a sports bottle spout (with a detachable lid) or an actual sippy spout AND you can get a sippy adapter to make the transition yourself which is a nice feature. The sippy spouts are made by Avent and are BPA free. You can also easily get replacement sippy spouts. The bottles are nice and shiny but they do get kind of dingy looking once they have been smeared by tiny fingerprints. Maybe it is an OCD tendency but I am often grabbing them and cleaning them to make them look shiny again, LOL. My kids really like this bottle and they especially like that it is a mini version of my water bottle. They give Klean Kanteen an A. I did too.

Born Free Sippy Cup (Price $10.99) – This BPA free sippy is made the same company that is widely known for making BPA free baby bottles. Their sippy cups are made with safe plastics and they come in 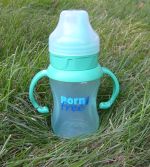 green, blue, peach and yellow (that I have seen anyway). They are fairly attractive for a plastic cup with their translucent and delicate colors. They have a detachable lid (this one got lost too) and handles on either side. They have a low vacuum valve designed to create free flow of liquid but unless your child is just learning to use a sippy cup the flow may be to slow, so the drinking cup model for older kids might be a better fit. We had no leaks with this cup but there was a big drawback for me. This cup breaks up into six different pieces…the cup, the handles, the vacuum valve, the top part that houses the valve, the spout, and the lid. I guess this is good for an extra good cleaning but sheesh…there are just too many pieces to keep track of. My kids gave it a B. I gave it a C.

Thermos Foogo Sippy Cup (Price $14.99-17.99) – This cup is also stainless steel like the KK and it has a soft plastic spout. You can also get it with or without side handles. There is even a taller cup with a straw available. The colors are quite attractive with blue/yellow and pink/purple combos. I have one friend that claimed to have a few small leak issues but so far we have not. One BIG advantage that this cup has over the KK bottle is that it is also a thermos. Warm drinks stay warm and cold drinks stay cold. It is good, sturdy cup. I love that it is made of stainless steel, I love that it is also a thermos, and I REALLY love the ultra stylish design. It is one gorgeous sippy cup (did I really just say that). ;) My kids gave this cup an A and I gave it an A+.

Just a quick side note: I hand clean all my sippy cups and water bottles but of the ones I have reviewed here the only ones you can put in the dishwasher are the Born Free, the Avent Naturally, and the Foogo (although it is not recommended for this one). So if using the dishwasher is a sticking point for you keep that in mind.

So…what is the verdict? Who wins the safe sippy cup celebrity death match….muhawaaa! The Foogo by Thermos wins the first round in our household but the Klean Kanteen is very close behind. My kids really liked the kid friendly design of the Sigg bottles but mom likes durability more. Born Free is a good option in plastic but a little to high maintenance for me. Avent Naturally came in last but it is the most affordable option so parents with more limited budgets can feel safe with it.

So which safe sippy cup or bottle wins in YOUR house? Also if you know of any other great alternatives for sippy cups or bottles (even baby bottles) please share below!

Make sure to check out our reviews on BPA Free Plates, Bowls, and Utensils!