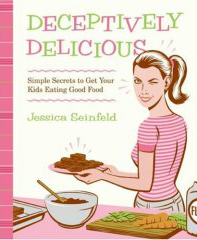 I must give Oprah another big hand for yet another great show. Today I tuned in to hear about Jessica Seinfeld’s new book called Deceptively Delicious. The concept behind the book is pretty amazing. Jessica was tired of chaotic dinner meals where her kids would refuse to eat their veggies, crying and spitting them out, and making her feel like a failure as a mom. She was so discouraged by this that she decided she needed to come up with a solution. The most obvious choices these days it seems is to keep fighting with your kids about eating their spinach and lima beans, making the whole family unhappy at dinner or to just give up….let them eat whatever they want so everyone can have a little peace. Except mom wouldn’t really have peace…she would know that her kids were not eating healthfully, so Jessica came up with a third option…get creative and hide the veggies so that her kids would not even know they were eating them. As she said on the show moms often think…”well if I just let them eat what they like they will ultimately get their nutrition from other foods” but this is just not so anymore. There is too much junk food on the market and MANY kids are eating diets composed of junk with NO nutritional value.

This attitude is more prevalent than many of us realize. One little boy I know quite well, for example, hates just about every vegetable or healthy food there is. He is all about chicken nuggets, hot dogs, pizza, cheeseburgers, chips, and cookies and since this all he ever wants to eat that is what his parents would give him every night. Many times they would swing through the fast food drive through for him so he could eat a hamburger and French fries while they ate a home cooked meal. It was not worth the fight for them and they just wanted to assume that he would make up for the lack of nutrition elsewhere….but he wasn’t. Morning, noon, and night he was eating junk. Last time I saw him he was 10 years old and already at a very unhealthy weight that would probably be considered borderline obese.

I have never had to worry about this issue very much. My kids have always been very adventurous in what they eat and they actually like their veggies. If you ask my oldest what he would like to eat above all else and he will likely tell you he wants calamari (squid) dipped in spinach pesto and broccoli covered with cheddar cheese. They love my vegetable casserole just as much as they love homemade pizza and they fight over who gets the biggest helping of sautéed mushrooms. But even so I think this book sounds wonderful and I am dying to try some of the recipes.

Basically Jessica spend about an hour a week pureeing vegetables like broccoli, squash, cauliflower, spinach, carrots, peas, and beets and throughout the week she mixes the purees with everyday foods like macaroni and cheese, pizza, chicken nuggets, tacos, banana bread, cookies, brownies, and cake. Her kids never know the difference and she gets them to eat their veggies without even knowing it. She still serves vegetables with every meal but she doesn’t stress if they don’t eat them because they ARE eating some in disguise.

Oprah tried many of her recipes and raved over them as did many kids in a taste test. It was another good show and the book looks promising.