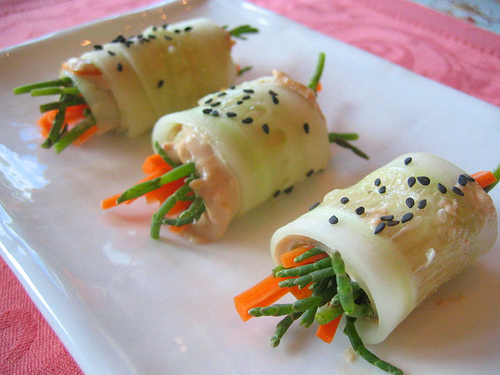 I have a new little experiment going on in my household and I am lov’in it…and I am not talking about McDonalds. It has been a long time since I have been THIS excited about an issue and that issue is raw foods.

It all started several weeks ago when I had some good conversations with readers after my post on vegetarianism and veganism that sparked so much controversy. It was suggested that maybe I might have felt different about my stint as a vegetarian if I hadn’t been killing the enzymes in my fruits and veggies by cooking them. Well, that got me interested in researching raw foods a bit more. Sure I had heard about raw food and read a few articles but never delved much deeper than that. But I ran across some great articles at NewsTarget that really got my attention and I have an enormous amount of respect for Mike Adams too. I got to see him in person awhile back and all I can say is “Wowsa!” He is a powerhouse of health and vitality. If he is eating raw then sign me up please! :)

Then as if reading my mind, he sent out a broadcast to his newsletter subscribers about his experience attending the Raw Spirit Festival in Sedona and he mentioned another raw foodist named Angela Stokes and her site Raw Reform. I was automatically enthralled with her story about losing 150 pounds on the raw foods diet. Her site led me to her numerous other raw food sites and blogs and I picked up half a dozen ebooks along the way.

Now for two weeks I have been devouring any book I can get my hands on about raw foods and I spent a fortune at Whole Foods buying up everything raw…and it is NOT that easy let me tell you. The amount of food that is processed and no longer in its raw state is staggering. For about 7 days I have been eating 80% raw and I am even more gung ho about it now than ever.

If you are not familiar with the concept of raw foods…it is basically a diet of completely raw, unprocessed, uncooked foods. Heating foods above 118 degrees is forbidden as it kills the enyzmes or “life force energy” contained in the food. Raw foodists generally believe that eating any food that has been cooked is eating a dead or decaying food and that it is therefore toxic to you. In fact many raw foodists refer to anything cooked as waste or garbage and perhaps it was that strong opinion that kept me from looking further into raw foods more closely in the past. Well, that and things like …. baked pies, breads, mashed potatoes, pasta, rice… I am rather attached to these things so this is going to be hard at times. But I have to admit there is some strange logic in eating food that has been devitalized.

I was also really hooked when I kept hearing about raw foods being a good way to detox your body. I desperately need this as I just spent the past year loading up on drugs meant to kill the cells in my body…the good along with the bad and filling up the remaining ones with toxic crap. I need a detox.

There is an obvious drawback though. Eating raw foods will make it much harder to eat locally and seasonally. If I am going to be eating more fruit then I will be eating more exotic fruits too and ones out of season for my area. Also, since canning would cook the food I can’t can for winter months. Guess I better think on that some more and get creative.

A lot of raw food enthusiasts are also vegan, so…does this mean I am going vegan after all? Nope. I will still eat dairy, meat, and fish…I am just going to be doing it raw. Raw milk and cheeses, sashimi, ceviche, and a good steak tartare…oh yeah. ;) I love this stuff anyway but now I have an excuse to eat it more often.

I hope to review some of the books I have been reading about the subject very soon because I have read some good ones. I also wanted to share a video (below) with you. If it doesn’t persuade you to at least take a closer look at raw foods then I don’t know what will. Not only is the man in the video HOT, he has some very excellent points about food, nutrition, and your body’s ability to heal itself. Enjoy!