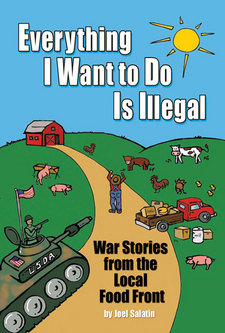 This is part two of my discussion about Joel Salatin’s new book, Everything I Want to Do Is Illegal. Read part one here.

Chapter one addresses the assault on raw milk and how legislation in regards to milk was a dream killer for him. Ironically milk became unsafe as it became an industrialized product. Now the very same process that made it unsafe in the first place is the requirement. Never mind the fact that people drank milk straight from the cow safely for centuries before the industrial revolution tainted it. Now we are all encouraged (or forced if raw milk is illegal in your state) to drink milk that is homogenized or “sterilized”. The government is all too happy to tell you that you MUST drink milk they have “cleaned” for you.

The second chapter also addresses the fact that the food sales business has been made an impossibility for many with the regulations for zoning, licenses, equipment, building codes, OSHA, etc. It is next to impossible to start a grass roots, foods sales business anymore. You can’t grow a business from infancy and watch it grow. Government regulations are killing the American dream.

I love how Salatin mentioned that he longs for a food NRA. The NRA or National Rifle Association is a force to be reckoned with. People join this organization because they own guns and they want to keep them and preserve their first amendment rights. But there is no food freedom organization and that is because people don’t fight for what they never had. It is only when people get a taste of REAL food that they decide that the government crap that has been forced on them just won’t do…and they fight. Here is a quote from Salatin about what he wants to accomplish:

I want folks incensed that their government has sold our collective freedom birthright for a bowl of global corporate outsourced pottage.

Virtually all of the processed foods currently sold at supermarkets could be supplanted with community-based entrepreneurial fare. Does your heart ache for this? Mine does.

Mine too. Unfortunately we live in a climate of fear. We have been told that unregulated food is tainted and unhealthy and that it surely carries disease. I say consider the source. If we grow some brains and think for ourselves and feed ourselves then the government no longer has control. In order to maintain the control they want they must manufacture fear and ANYTHING they say is suspect in my mind. Those that throw themselves under the bus of government protection will find they can’t crawl out from underneath it when the dust settles. If this situation continues to go unchecked we will only be able to eat food that government certified as safe and of course they get to decide what is safe and what is not. Will we be surprised when the food considered safe is the very same food offered by companies that can afford to wine and dine the decision makers?? Another quote from Joel Salatin:

In the name of offering only credentialed safe food, we will only be able to eat irradiated, genetically adulterated, inhumane, taste-enhanced, nutrient-deficient, emulsified, reconstituted, pseudo-food from Archer Daniels Midland, “supermarket to the world”.

It is too scary to think about but yet I believe 100% that this is exactly where we are heading. :(

In chapter 3 Salatin shares the review process of the chicken police and how they have threatened and intimidated him on many occasions asking that he make changes to his operation that are in NO way supported by law. They interpret the law as they see fit. Salatin sticks to his guns and fights with a lawyer at his side but many other farmers are forced out of business. Salatin was able to prove that his chicken product was 2500% times cleaner (microbes and bacteria) than that found in a grocery store…this did not even faze the chicken police….proving that safety is NOT what concerns them…control and money is.

In chapter 4 Salatin relates how a beef inspector once came to him and said that their beef currently hanging in a chilling room at a processing plant was being held while they investigate an accusation that he is selling uninspected beef products. Never mind the fact that the beef is already 7 days old and needs to be sold. The inspector threatens to hold what is a third of Salatin’s annual income for up to 6 months until it is rotten…while they investigate a complaint that may or may not have ever been made. Theses food inspectors can bankrupt you on a whim. And guess what they wanted to speed up the investigation? The names and addresses of all Salatin’s customers. I guess they wanted to identify those renegade consumers who were so blatantly ignoring the advice of their government.

You need read this chapter to see the hilarious conclusion but it goes to show how ridiculous and foolish these regulations are and why they have little to do with food safety and much to do with pressure from Kroger and Wal-Mart to shut the “little guys” down.

In chapter 5 we learn why it is illegal for Salatin to cure some of his pork to make bacon and why he had to outsource this process forcing him to price his bacon at $6 a pound. The most interesting part of this chapter is where he reprints a report from the Virginia Department of Agriculture and Consumer Services discussing how they intended to crack down on farmers selling goat, sheep, and water buffalo cheese. In this report they discuss how they cannot allow consumers to make their own choices regarding what foods they can eat because most consumers do not have the required knowledge to make an informed decision. If it is for sale….people will eat it and assume it is safe. AKA we are too stupid to be able to decide for ourselves what we will and will not eat.

They also throw in a mention of how it is the children who will suffer as their duped parents feed them unsafe food from heinous local farms and farmer’s markets. As Salatin point out, it is ridiculous to think they give a rats behind about the children when they are totally amenable to allowing kids to eat processed junk food, drink soda, watch TV and play video games all day, and be pumped full of drugs like Ritalin. If they got a hold of some raw goat cheese…that would be catastrophic though.

Chapter 6 relates the story of how The Health Department (HD) determined that Salatin’s eggs were contaminated with Salmonella. Apparently one the chefs that he supplied fresh eggs too made some Eggs Benedict and Hollandaise sauce with Polyface eggs. The sauce was served from an open bowl that had sat in the kitchen for 5 hours and the restaurant itself was found to have some cleanliness issues.

But when a HD inspector saw Salatin’s unwashed eggs she determined that it was the eggs that caused the problem. She directly stated that unwashed eggs are inedible, despite the fact that there is NO regulation saying eggs must be washed. In fact, in France, it is just the opposite…washed eggs are illegal to sell whole as the coating provided by a hen on her eggs provides bacterial protection. This just shows how bass ackwards the US is in relation to food safety.

The HD did no testing to see if was the eggs that caused the salmonella outbreak…the opinion of an uneducated Health Department worker was all that was needed. Salatin did his own independent testing of his eggs and the chicken manure and no salmonella was found. The HD did not care.

Chapter 7 basically tells the story of how an attempt to sell chickens across states lines brought so much red tape that the chickens were required to travel over 500 miles from different processing facilities just to be sold 150 miles from the farm where they were raised. Creating a destructive and inefficient way to farm and sell product.