↑
You are here: Home / A Green Home / The Danger of Phthalates and PVC 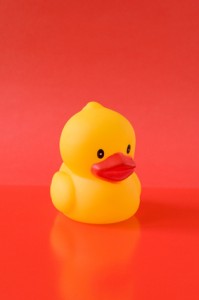 I have devoted a fair amount of discussion on this blog to BPA, a nasty ingredient found in plastics. Although lately my blog stats tell me that moms are also very concerned with Phthalates and PVC too…and rightly so. Here are the basics about these and why we should avoid them.

Phthalates are a group of man made chemicals that are widely used as plastic softeners and in hairsprays, perfumes, cosmetics, toys, shower curtains, wood finishes, lubricants and more.

Over 1 billion pounds of this substance is produced worldwide each year.  Why there is so much concern about this substance is that animal studies have shown that the chemicals contained in phthalates can cause harm in a variety of ways, from organ damage to immune suppression and cancer.  Other studies have shown that phthalates can damage the liver, the kidney and the reproductive organs.

A study by the Centers for Disease Control and Prevention (CDC) found that people have higher levels of certain phthalates in their systems than was previously thought.  Not only can humans digest this toxic stuff but they can also be exposed to its harm through skin contact.

The most worrisome finding is the effect that these chemicals can have on reproductive health.  A 2005 study released by Environmental Health Perspectives found that pregnant women exposed to common levels of phthalates might have baby boys with reproductive organ abnormalities.

A big question that many ask is how and where are we being exposed to these chemicals?

Reports have been released indicating that women between the ages of 20 to 40 years have higher levels of dibutyl-phthalate (DBP) in their bodies than anyone else.  DBP is apparently used in cosmetics, toys, flooring, adhesives, wallpaper, furniture and shower curtains.  So it would appear that since women in that age group use cosmetics and other personal care products that contain this substance, they are being exposed more than anyone else.

Other Means of Human Exposure

Many teethers and soft toys contain phthalates and research has shown that platicisers like phthalate can leach out of toys into the mouths of children who chew them. Here are som BPA and Phthalate free teethers:

Products in the House

Phthalate is used in many PVC building materials, for example PVC flooring.  Studies have shown that phthalates can be found in household dust where it can be inhaled by both children and adults.  Infants breath twice as much air as adults and spend most of their time indoors thus placing them at greater risk of harm due to increased exposure to phthalates in household dust and other interior substances.

Many hospitals use bags and tubes that are made of PVC and leach phthalate plasticisers.

One of the best ways to reduce exposure is to encourage the government and manufacturers to seek safer alternatives for products through regulations and research.

PVC (polyvinyl chloride) plastic or vinyl is considered to be one of the worst environmental and health offenders in the world.  What makes this plastic so dangerous is the very toxic chemical it releases and creates called dioxin.

PVC’s emit VOC’s (volatile organic compounds) that are actually off-gassing from the plastics inside plastics item like a car dashboard (think “new car” smell), or a shower curtain.  Extensive exposure to these VOC’s can cause nausea, sore throats and headaches.

It is strongly believed that many of the symptoms of “Sick Building Syndrome” like fatigue, depression and headaches, can be linked to high levels of VOC’s in a building.

Most VOC’s can be found in paint, carpets, cleaning supplies, adhesives and various sorts of plastics.  PVC becomes most dangerous to us when phthalates are added to it to make it softer.  Alarmingly enough, children’s toys use this softer version of PVC.

It is widely known that phthalates can cause harm to the reproductive system of both males and females.

PVCs are not only present in some of the products that we buy but it is in the environment surrounding some communities.  Sadly, some communities in proximity to factories that make products containing PVC have been affected by PVC that has made its way into groundwater and into the surrounding atmosphere causing air pollution.

When products containing PVCs are discarded they create additional dangers to our environment because PVCs are not recyclable and therefore end up in our landfills.  Other PVC based products that are not discarded in landfills are incinerated and this causes additional danger because PVC’s release toxic dioxin when incinerated. Hospitals burn their waste to prevent disease contamination.  Among this waste are often medical tubing and other devices that are made of PVC.

The good news is that many major corporations are now phasing out the use of PVCs.  Stores like IDEA, The Body Shop and even Wal-Mart are taking steps to phase out the selling of products containing PVCs.

While there are some institutes and organizations that will still argue that PVC is relatively safe.  There are significant segments of the research community who argue otherwise.  In 2007, the Technical and Scientific Advisory Committee of the US Green Building Council released a report that concluded:

“No single material shows up as the best across all the human health and environmental impact categories, nor as the worst but the risk of dioxin emissions puts PVC consistently among the worst materials for human health impacts.”

BPA, Phthalates, PVC… check the products you are using and look for alternatives.

Related Links: What the Numbers on Plastics Mean