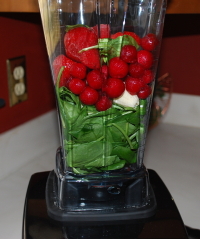 If there is one kitchen gadget that is indispensable in this house it is hands down a high speed blender. Over the years I used many different blenders and they could pretty much be summed up in one word…crap. Anytime you tried to blend something with a little substance they would get jammed up, they would blend unevenly leaving chunks of ice in a smoothie for instance, and generally I just never met a blender I liked. That all changed about 4 years ago when I went into a Costco in Arizona and saw a demonstration table for Vita-Mix blenders. I stood mesmerized for about 2 hours (not kidding) sampling smoothies, soups, ice cream, lemonade, salsa, and much more.., all made right in front of me in minutes with this miracle machine. On that day I fell in love…with a blender, LOL. It did not go unnoticed by my mom (who was with me) and I walked out of Costco that day with my Vita-Mix, courtesy of her.

Now this could be one of those tales where I bought the pricey blender and rarely if ever used it. It would make sense since I had a blender already and did never use IT. But no, over the past 2.5 years I have used my Vita-Mix on average 2-3 times a day…EVERY day. I have made ice cream, sorbets, soups, salsa, pie crust, cookie dough, pie filling, puddings, salad dressings, pizza crust, Popsicle filling, hundreds of smoothies, and much more. My mom loves the fact that something she bought for me has been so well received and adored.

So what makes the Vita-Mix such a kick butt blender? The number one thing is that it makes healthy eating so much easier. Want a green smoothie? No problem. Not in the mood for store bought salsa…make your own with fresh ingredients in just 60 seconds. While your at it grind up some flax seeds, tomatoes, celery, a little lime, and cilantro and then spread the resulting pulp mixture onto a dehydrator tray or oven tray for homemade Mexican style crackers. Want some fresh juice? Throw the entire fruit or veggie in there skin, seeds, and all watch it get pulverized into juice. Want sorbet? Throw some frozen raspberries and some spinach in the blender and in 2-3 minutes you have a healthy, yummy sorbet. See? Healthy eating made easy.

I use it at least 2 times a week to blend soups and make them creamier, eliminating the need to add flour or cornstarch. I make green smoothies every morning and I blend fruit (and sometimes veggies) to make homemade Popsicles all summer long. I use  it ALL the time if you haven’t guessed. And yes I own one of those nifty hand mixers and a food processor… they sit untouched most of the time… go figure.

Secondly, the Vita-Mix 5200 is built to outperform and outlast any other kitchen appliance on the market. This bad boy has some serious power with a powerful 2 peak HP motor that works with precision-crafted stainless steel blades. I have never put anything in this blender that it could not make mince meat of in mere seconds. In our house it replaces a food processor and a juicer too….so those are expensive gadgets you won’t need to buy anymore.

Up until recently I only had experience with the Vita-Mix 5000. So how does my newer Vita-Mix 5200 model compare with the 5000? There are some impressive improvements and the number one being IMO that the blending container is now made of Eastman Triton copolyester making it a BPA free blender!! No need to worry about BPA leaching into the smoothies or hot soups anymore. 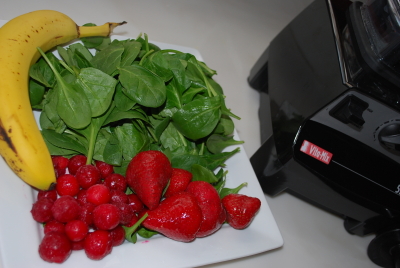 The container has a sleek new design with a new soft grip handle…love that feature. It makes it much easier to hold on to when it is heavy with delicious smoothie. The lid now has two clamps that secure it to the container so no more pushing hard to get the lid to fit tightly. The plug is also easier to remove when needed so that you use the tamper. Except I have not needed to use the tamper at all because it also has a new two peak HP motor. I thought my 5000 was powerful but the 5200 packs some serious power. My green smoothies blend in like 15 seconds now.

Another change is that the switches and dial are now soft grip. That change is okay I guess but I did not find it to be very important. And as before the blender comes with a DVD and a very nice cookbook with recipes. You can also get a dry container so you can ground your own flour.

Oh and did I mention that Vita-Mix offers a FULL 7 year warranty?! That is an incredible benefit but one you likely won’t even need as I know one gal that has had her Vita-Mix for 11 years now and it is still going strong.

My first test drive of the Vita-Mix 5200 was of course going to be a green smoothie. I put in three cups of baby spinach, some Vita Mineral Green, a ripe banana, a small handful of frozen cherries, 4-5 frozen strawberries, and about a cup of water.

It took about 15-20 seconds to make and the kids LOVED it…they always do. It is a great way to get kids to drink their greens and we make all sorts of variations. Perhaps we will make a Kale smoothie later!

If and when you want to purchase a Vita-Mix you can go to Vita-Mix.com and use code: 06-002324 for FREE standard shipping (if it isn’t already tabulated). Is it worth the $450 price tag? Absolutely, hands down, for sure, you betcha! ;)

You can also buy an older model on Amazon. Enjoy! 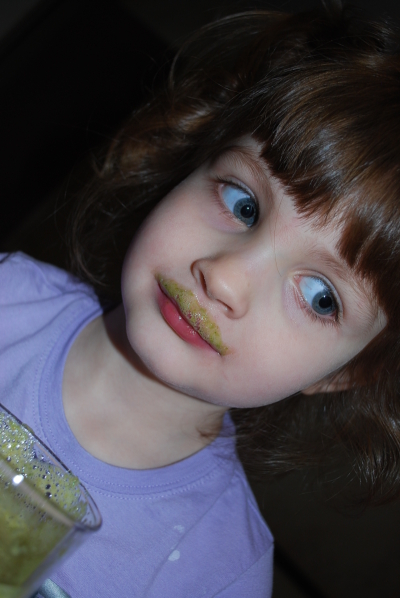