↑
You are here: Home / parenting / Kids Books That Teach Tolerance 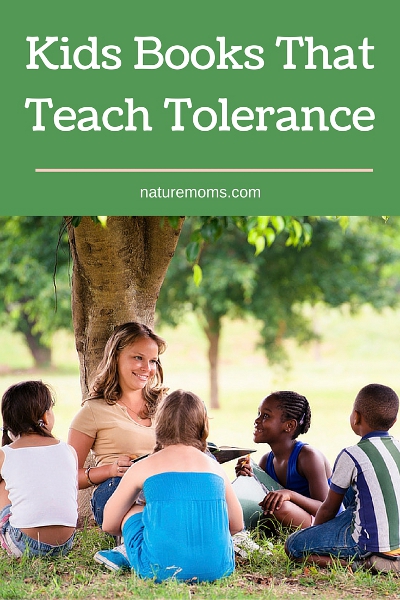 Over the past week or so a few comments made by one of my children and certain current events (Prop 8 trial) made me think we need to spend some time visiting the issue of tolerance as a family. One of the comments by my child made me wonder if their school isn’t actually segregating the children to some degree. There is a large group of kids that attend their school that are racially and religiously different than what you might find typical in this particular area. I see them every day getting on and off their buses so I know that there are many of them and yet neither of my kids (in two different grades) shares a classroom with any of them. They have two buses to themselves as well. I find the idea disturbing because part of the draw for me in sending them to public school is for them to be part of a diverse group of kids. And yet my kids are not getting that experience at all.

I have also been really disheartened by all the legislature enacted by certain states in the past few years that are naught but hateful attempts to deny gay and lesbian families their civil rights. I have been following the Prop 8 trial since it began last week and it just makes me so angry. I guess I have an intolerance problem myself. I am intolerant of intolerance. I don’t want my kids to be around people who are judgemental of the race, morality, or choices of other people and yet isn’t intolerance a choice in itself? This feels like one of those chicken or egg arguments.

I found the race and ethnicity discussion with my own kids to be not so tough to handle in large part because they have so many family members that do not look like them. My kids have MANY Japanese relatives since my mother has 7 Japanese siblings. My SIL and nephews are Chinese. Having a diverse family helps. But yet we live in an area where prejudice is alive and well. I think we need to start reading some books that address and tackle intolerance so I made a list of ideal books. Do you have any to share?

Amazing Grace – Grace loves stories, whether she hears them, reads them, or makes them up. Possessed with a marvelous imagination as well as a strong flair for the dramatic, she acts the stories out, always giving herself the most exciting parts. Thus, it is natural when her teacher announces a classroom production of Peter Pan , that Grace wants to play the lead. One classmate says she can’t because she’s a girl and another says she can’t because she’s black. When a saddened Grace relates the days events to her mother and grandmother, they tell her she can be anything she wants to, if she puts her mind to it. Inspired by her family’s support, her own indomitable spirit, and an excursion to a weekend ballet starring a lovely Trinidadian dancer, Grace shines during her audition, leaving no doubt in anyone’s mind as to who will play Peter Pan.

Oliver Button Is a Sissy – Oliver Button is a boy who likes to do things that go against the stereotypical things that boys do, such as dance. Other boys at school tease him and call him names. Even at home he is told he should do more “boy things”. But by staying true to himself he finds what he is good at and what make shim shine and the jeering stops.

Be Good to Eddie Lee – A young girl discovers a new capacity for friendship when she spends some time with a neighbor boy who has Down’s Syndrome. Christy’s mother has told her to “be good to Eddie Lee,” but Christy, however, would rather go wading with her friend JimBud than be pestered by Eddie Lee. But when Eddie Lee, uninvited, follows the two kids, Christy reluctantly includes her neighbor and is pleasantly surprised at how the afternoon turns out.

A Coat of Many Colors – This story is about a little girt whose mother has no money for a new coat so she sews one out of rags and the child is teased by her classmates. This book is based on the Dolly Parton song.

Don’t Laugh at Me – Another book based on a song. The story is about the ridicule suffered by a boy with glasses, a girl who wears braces and a wheelchair-bound child, among others, ultimately uniting the voices of the bullied in the verse “Don’t laugh at me. Don’t call me names. Don’t get your pleasure from my pain. In God’s eyes we’re all the same.”

Come Sit By Me – Karen’s friend Nicholas has AIDS. When Karen’s parents find out that Nicholas is being left out by the other children, they help organize a meeting to address fears of both caregivers and children.

Mommy, Mama, and Me – Rhythmic text and illustrations with universal appeal show a toddler spending the day with his mommies. From hide-and-seek to dress-up, then bath time and a kiss goodnight, there’s no limit to what a loving family can do together. Also Daddy, Papa, and Me.

Muslim Child – This book presents aspects of the daily lives of Muslim youngsters in various locales, including Canada, the U.S., Nigeria, and Pakistan. The child’s-eye view substantially increases the likelihood that non-Muslim readers will be able to internalize and understand what the protagonists are feeling and thinking, even if the religious basis of those thoughts and emotions is unfamiliar.