↑
You are here: Home / Birth & Baby / The Benefits of Cloth Diapers for Mom and Baby 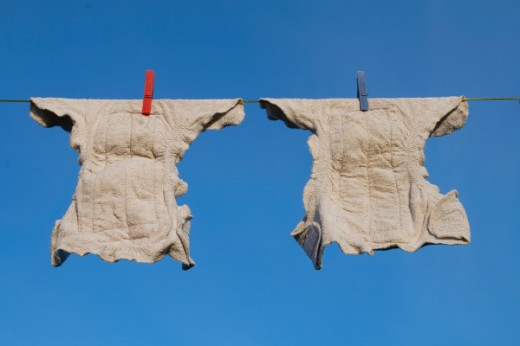 This week the question posed to Green Moms Weekly is “What do you say to people who can’t wrap their head around the cloth diapering phenomena? Give some simple and positive examples of how cloth diapering can benefit both mom and baby.”

I decided to cloth diaper my second baby in late 2003, before she was even born. I spent 4 months researching cloth like crazy and putting together my newborn stash. When I told friends and family of my intentions all I got were incredulous looks or an eye roll as if to say they didn’t believe I would stick with it for more than a day. You would have thought I told them I was planning on taking the dirty diapers to a nearby river and beating them against rocks. It was just an insane idea to them but I did not let them deter me from my decision. When I brought my daughter home from the hospital I immediately put her in a Kissaluvs fitted diaper and a wool diaper cover. I have since tried dozens upon dozens of different cloth diapers but I still think Kissaluvs and wool covers would be my go to diapering system for the newborn months. After a couple months we had fun playing with designer diapers, all-in-ones, pockets, and all manner of custom diapers sewn by wahm seamstresses. I also started making my own diapers right after she was born. Let’s just say that she had more than enough diapers in every color, design, and fabric known to man I think. Want to see some that I made? Check out my flickr set here.

And what did the naysayers think? I think they were green with jealousy at how much fun I seemed to be having and how adorable my two youngest babes looked in their diapers.

Here are a few of the benefits of cloth diapering for mom and baby:

Cloth is Healthy – Disposable diapers are loaded with chemicals that can irritate baby’s skin and cause rashes. It also doesn’t help that the baby’s bum is wrapped in plastic either. While I cannot say that we never experienced rashes in cloth diapers I can say that I think we experienced less of them. Cloth allows the skin to breathe and you aren’t exposing it to petro chemicals, perfumes, and all the other nasties in disposables.

Cloth is Fun – I had sooooo much fun making and buying diapers as well as putting them on my babies. My kiddos usually wore no pants because who wants to cover up that gorgeousness? Perhaps this is why my youngest still can stand to wear pants? LOL. Regardless, most moms find it fun to dress their little ones up in cute clothing and using cloth diapers ups the fun factor ten times. Can moms who use disposables claim to have as much changing diapers as us cloth diaper moms? I think not.

Cloth is Affordable – Disposable diaper purchases usually total 2 to 3 thousand dollars from birth to the potty learning. Cloth diapers done on the cheap can cost $300-$400 for the same period of time. Designer diapers may cost around $800 or more but still, much cheaper than disposables. Cheaper diapers include prefolds, fitteds, and covers made of recycled wool sweaters. Fitted diapers and prefold diapers can even be made using old t-shirts and blankets if you really want to keep it cheap. This would of course be a very green way to go as well.

Slightly more expensive would be all-in-one diapers, pockets, and various designer diapers. It is not unusual to pay $15-$20 or more per diaper but these can last years, for more than one child, and they usually can be sized to fit newborns and older babes alike. Some scoff at the price of cloth diapers but do you want to pay for a reusable diaper that can be passed on to subsequent babies or even resold used … or do you want to spend thousands of dollars on something that is used once and then thrown in the garbage? The answer seems like a no brainer to me.

Cloth is Green – Reusable products are greener than disposables. Period. Whenever you see an industry funded study
that proclaims there is no ecological difference between cloth and disposable remember what they are actually trying to sell. Well, yes they are trying to sell disposable diapers but they are also trying to sell a ludicrous idea. If someone told you that it would be greener if we all wear disposable panties and underwear instead of washing what we have and reusing them we would think they were nuts. Cloth diapers are underwear for babies. Washing and reusing diapers makes good sense and it is greener by far.

I could keep going but I think I have hit the major benefits. Do you have any to add?

Also be sure to check out what Carrie and Rachel had to say on the topic.