↑
You are here: Home / Green Cars / My Week With the Mitsubishi i Electric Car 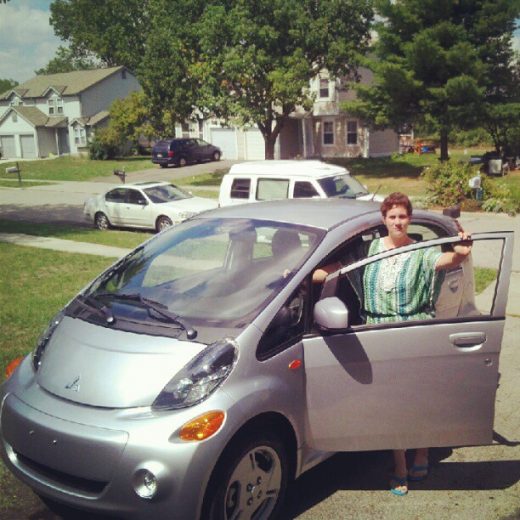 A few months back I did a giveaway/promotion to celebrate the imminent release of a groundbreaking electric car, the Mitsubishi i. After researching the car for that article I was super excited because it looked as though greener cars, and electric in particular, were starting to become more affordable and within the reach of average folks. The starting MSRP is $29,125 and the net MSRP* after a federal tax credit is a very affordable $21,625 for the standard ES model and only $23,625 for the SE upgrade, making the starting price for the all-new Mitsubishi i several thousand less than other comparable electric vehicles available in the market. It is now recognized as the Greenest Vehicle of 2012 by the American Council for an Energy-Efficient Economy.

Now I am not yet in the market for a new car because either fortunately or unfortunately, depending on how you look at it, my older model sedan (2000) refuses to break down. She keeps on kickin and as long as she does I have no reason to buy another vehicle…even though I feel like I have Wall-e and everyone else has Eva. That said though I am already saving my pennies for the day when I will have to replace my car and I am doing research now so that I will know what I want. So I was over the moon to get the chance to drive the Mistusbish i last week, thanks to Mitsubishi Motors. The picture above was taken the day they dropped it off. I could barely wait to get behind the wheel!

I just love how small and stylish it is… 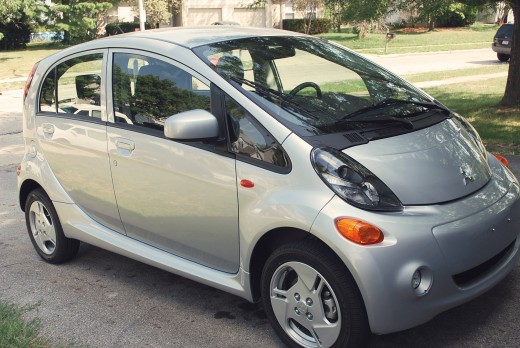 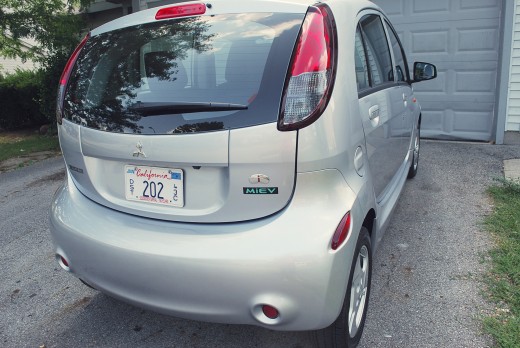 My previous experience with electric cars was pretty minimal. I drove a Ford Focus EV a couple months ago in Detroit but only got to get behind the wheel for 5 minutes or so. Still I knew it would be quiet (compared to a regular vehicle) and that I would need to be mindful of battery usage since this car is battery only, not a hybrid that also takes gas. From the get-go you know something is very, very different. When you turn the key in the ignition you do not hear that familiar rumble of the engine starting up, instead you hear a little beep and you see a “ready” light on the dash. You are now ready to drive. So very cool!

I am not sure if it is because electric cars are so unusual here in Central Ohio, the California plates on an EV car in Ohio, or if it the looks of the car but the Mitsubishi i got lots of attention everywhere I drove it. I had people wait for me to park and then approach me to gab about it and often times people walked around it in parking lots or pointed and chatted up their friends about it. It was an attention getter for sure!

A feature that I LOVED was that I had the ability to plug in my iPod and see my entire playlist on the dashboard screen. No need to burn CDs or listen to the radio, just take the iPod from the sound dock in the house and plug it into the car, easy peasy. The entire family has music and other audio files on this iPod so the uses are endless. And yes I know many newer cars have this feature but remember that I currently drive a dinosaur…so I was in love with this feature okay?? Oh and yes again…that IS in fact a first generation iPod. It is a dinosaur too. 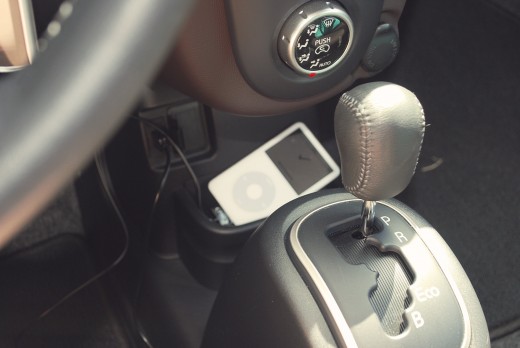 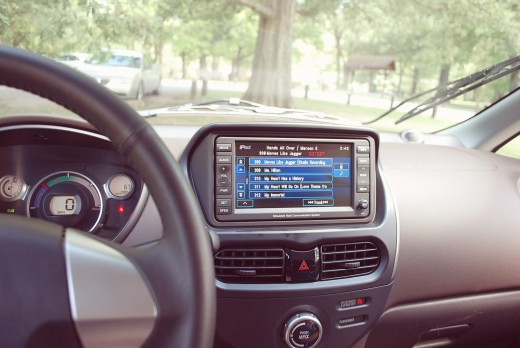 Another awesome feature related to that display is that there is a camera on the back of the vehicle which shows you your rear view when backing out. It took me a while to get used to this, trusting the screen instead of physically looking behind me, but once I did get used to it I really liked it. The display also offers turn by turn navigation. Most smart phones can do this too but having the directions on a big screen right near my field of vision is much safer!

What I liked most about driving an electric vehicle though is that it forces me to be a more mindful driver. Because you are operating on battery power and can’t just slip into the gas station and fill up you have to plan your trips and perhaps drive less overall to make it work. I was very mindful of where I needed to go and how much battery it would take to get there. It never presented a problem because we generally stick pretty close to our home but if we wanted to go across town then we would need to find a charging station nearby or we might choose to go to Easton Mall to see a movie rather than Marcus Cinemas since the former has parking spots with EV charging stations. We might decide that the library is now only feasible once a week instead of two. Some may find this restricting but I found it wonderful. Sometimes it is hard to make changes unless you are forced to and anything that forces me to be more mindful and green is fine by me.

I also liked playing around with the different drive modes on the Mitsubishi i. It directly affected the way the car drove and how much battery was used up. 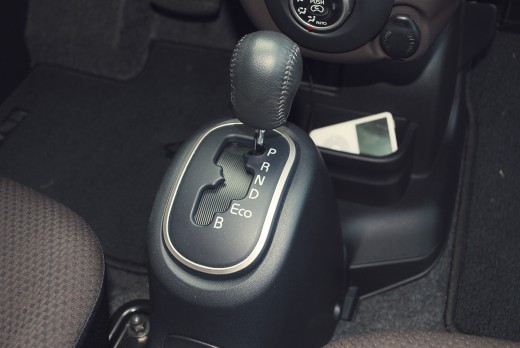 Drive worked just like a regular car. The Eco and B modes create maximum economy and maximum regenerative brake power. I didn’t even notice much of a difference in acceleration capability but both of these modes enable a clever regenerative braking system that automatically reclaims the energy from deceleration and charges the battery. After initially testing out the regular drive mode I stuck with with Eco and more often the B mode exclusively. I loved that as soon as my foot left the gas the car started started slowing to a stop, without my even having to touch the breaks.

Another awesome feature is money savings. Plugging the car in at night instead of filling up at the station was cost effective. I don’t know for sure what the actual cost to my electric bill will be yet but according to the Mitsubishi web site the average cost is $3.60 per 100 miles. At that rate we would be spending $7-12 a week or $40-50 a month for transportation. Right now we easily spend $50 or more a week on gas. According to the savings calculator on the Mitsubishi site, it would save us about $2500 a year. That is a significant cost savings! 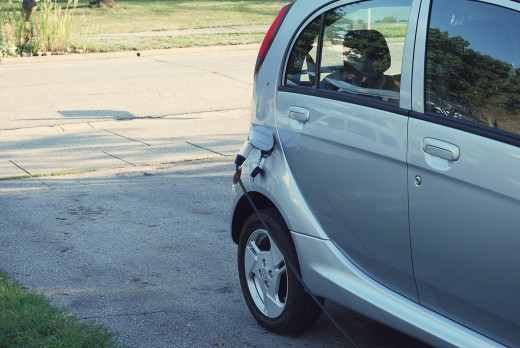 Other stuff to like included all the room in this car. It looks kinda tiny from the outside but it was very, very roomy on the inside. It seats four people and all have lots of wiggle room. The trunk area is kind of small but the hatchback design helps with that and for our lifestyle the size would not be a hindrance at all. We don’t do crazy bulk shopping at Costco and we don’t need a car that can transport furniture. We do have five members in our family though so that could present an issue but if we kept a second car as backup, which most people do, we could easily make this car work for us. Especially since this would not be the car we would do any travelling in.

The key remote is also pretty cool. You can pre-heat (important in Ohio) or pre-cool the car remotely without ever having to go outside. Not only is that super convenient it also helps conserve battery if you are to do this first thing in the morning, before unplugging your car. No battery will be used to heat or cool the car that way. 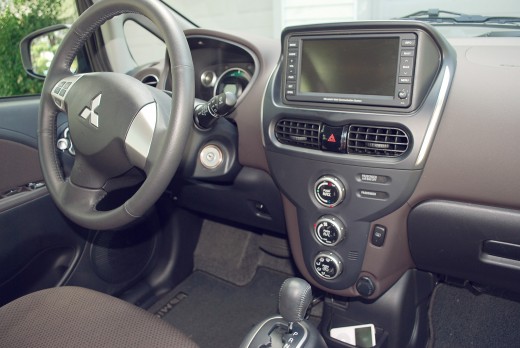 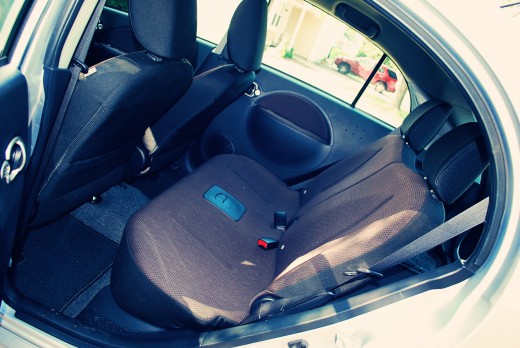 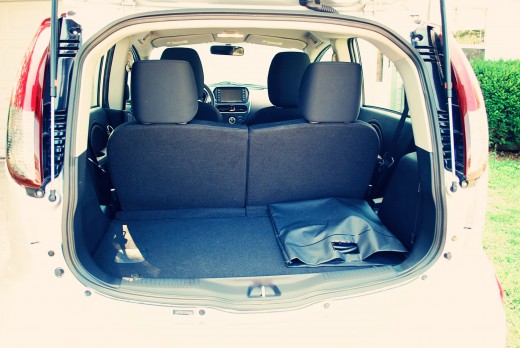 This is a shot of the truck area with plenty of room. The bag there has the charging cord and the seats can be folded down for even more room. Since I generally don’t buy in bulk and I like to do my shopping without kids this car would be perfect for our needs.

Now on to the drawbacks…there are only a few. The car seemed to drift a bit more than I am used to on the highway, in high winds. This is no doubt due to the car being so small and relatively light. The car doors also seemed very light and when my kids shut them they didn’t seem to have the weight behind them to ensure a tight seal. Maybe my kids are just used to heavy doors but at any rate I often found upon starting the car that a child had left the door slightly ajar during our last trip and I had to get out and shut it before I could proceed. That is a small annoyance though and something that might remedy itself over time, as they got used to the car.

Overall I was greatly impressed by this EV. Even though it is a 4 passenger and we are a family of 5 I would still buy it. I love how it made me a more mindful driver and I love how much money it would save us if this were to become our regular car. The price also makes it very affordable. I just cannot fathom paying some of the current prices for EVs, hybrids, and plugin hybrids. In fact I can hardly fathom paying a new car price for any vehicle but this car has me singing a different tune because the price is low compared to other electric vehicles on the market and all the ways we would ultimately be putting money back into our pockets with cost savings benefits. The i-Miev puts the oh so cool electric car within the reach of the average Joe or Jane.

Disclosure: I borrowed a Mitsubishi i from Mitsubishi Motors and their representative for the purposes of this review. Sadly I had to give it back…