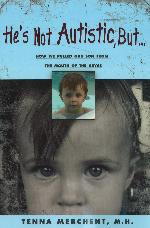 I read a really powerful and valuable book for parents this week called He’s Not Autistic, But… How We Pulled Our Son From the Mouth of the Abyss by Tenna Merchent, M.H.

I was initially drawn to this book because 1. The author’s son was on the autism spectrum like mine and 2. the author believes that vaccines caused or at the very least greatly exacerbated her son’s condition just like I believe was the case with my son. The author shares her journey to heal her son in non-conventional and alternative ways when industrialized medicine was not able to do a darn thing for him. And guess what…she found the healing she was looking for…the healing that conventional doctors say doesn’t exist. She did pull her son from the mouth of the abyss. The book touched me and made me cry. I wish every parent could read it and be forewarned. I made the decision to forever alter my own son’s life on the second day of his life when I allowed a Hep B vaccination shot and I sent him further into a darker hole with each subsequent vaccination until FINALLY one sent him over the edge and almost into a body bag. The realization that vaccines did this was of little comfort though as my son lay in a hospital bed hooked to a respirator. I can only hope that with books like these, that more parents will realize this is risky business.

It is also a good book for people who want to learn about what alternative medicine has to offer. The author not only healed her son but she was sick as well and she healed herself and has since become a Master Herbalist and is pursuing her N.D (Doctor of Naturopathy) degree. Interestingly she believes that her sickness…aluminum toxicity and a yeast overgrowth were passed on to her son in utero and this what what set him up for all the problems he had…allergies, autism spectrum, Candida, speech delay, sensory issues, etc. I say HAD because her son is now CURED.

In the beginning of this book Merchent gives us a long list of the behaviors her son exhibited that clearly showed he was at risk for autism. Then she goes on to describe issues facing most autistic children that must be addressed, allergens and yeast. Many kids on the autism spectrum are allergic to milk, corn, soy, eggs, and wheat. They also have yeast build-ups in their bodies. Surprisingly though Merchent mentions that aluminum in our bodies is usually the cause for the yeast imbalance. Aluminum kills off the good bacteria and then sets us up for an imbalance. Aluminum just happens to be found in tons of prescription medications for children and adults. It can also be found in many food products and of course, cans of soda…which Merchent drank religiously. Merchent points out that we will not be able to get yeast under control unless we get rid of the aluminum first and she explores this in depth in subsequent chapters. Merchent basically believes that she had an aluminum problem, in large part due to a diet soda habit..she passed that on to her son who received aluminum from other sources including vaccines, and meds given to him to fix his illnesses contained aluminum and so and so on. Very interesting stuff.

This is only the tip of the iceberg though…seriously you have to get his book, especially if you plan on having more kids…or even if your not. I will not be having anymore but I still went to town on this book with a highlighter and notes in the margins. It has some seriously important health info.

For instance, Merchent shares the three things that can really set your child up for autism that happen before they are even born or at birth and two of them are interventions. She also shares her experiences with painful nursing despite the fact that she was doing everything right…the cause was yeast overgrowth and she describes the symptoms of yeast overgrowth you may not even know you have…she had it for years and never knew. She also talks about sensory integration issues that her son had and seem to quite common nowadays.

The vaccines chapter I read all the while nodding my head in agreement. Vaccines are connected to SIDS, seizures, learning disabilities, and autism. My son was injured by a vaccine and 3 of those 4 things affected him in some way although only one affected him severely. She made a sobering statement at the end of this chapter that I identified with:

I am one of the lucky mothers; my son recovered from the damage caused by shots.

I hear you Tenna. I am one of the lucky ones too. When I think of what could have been…well I don’t like to think about it.

Her chapter on allergies really got my wheels turning. Her son would walk on his tippy toes and bang his

head against things if he had chocolate. My youngest son doesn’t have bang his head but he does walk on his tippy toes quite a bit and it has always bothered me because typically it is a sign of autism. He is also almost 28 months old and doesn’t speak. I need to read the book she referred to as the allergy Bible, Is this Your Child? by Doris Rapp, M.D. I wonder if my youngest could be allergic to something that is delaying his speech and causing the tippy toe walking. I just ordered the book they are only a couple bucks used, at Amazon.

Merchent walks us through the first year and a half of her son’s life and her experiences with his doctors. After reading about it I want to track them and slap them silly. This kid had TONS of problems and all they cared about was giving him vaccines. They also acknowledged after much time that he did have allergies to several foods but advised his mom to feed him those foods anyway so he would gain weight. I was furious just reading about what she went through.

As I said though I have only scratched the surface. There is some great information about allergies and aluminum that EVERY person should read….especially if you get sick often, have Candida or suspect that you might, have allergies, or if you drink soda from a can. I put this book down and immediately started looking for a Master Herbalist to visit in my area.

I highly recommend this awesome book: He’s Not Autistic, But… How We Pulled Our Son From the Mouth of the Abyss by Tenna Merchent, M.H.