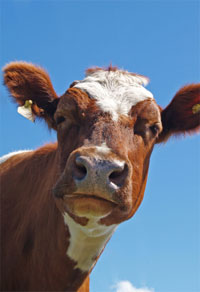 Two years ago…even last year, I would have defended my meat loving ways until the cows came home. ;) But as I go further along in this great green journey it gets harder and harder for me to justify eating meat. The statistics for environmental devastation just get more and more depressing. The meat eating habit is killing this planet and I think it is time for more green folks to own up to that instead of treat it like the elephant in the room that everyone wants to ignore.

Just look at some of these scary statistics:

The US imports 200 million pounds of beef from Central America every year and much of the land used is rain forest land. For each hamburger that originated from animals raised on rain forest land, approximately 55 square feet of forest have been destroyed. Ouch! Rain forests are like the lungs of this planet and they house many different species of animals and could contain life saving medicinal plants. As a society though we have decided that meat is more important than our rain forests. As one man who lives in my small town said, “We don’t have a rain forests in the US so who cares.” We should all care that American dietary “needs” are destroying another part of the planet.

One pound of beef requires an input of approximately 2500 gallons of water, whereas a pound of soy requires 250 gallons of water and a pound of wheat only 25 gallons. With more than one billion people worldwide who “lack enough safe water to meet minimum levels of health”  our meat eating/water guzzling ways should bother us. Source

Certain fishing practices endanger many fish species and result in overfishing that results in an imbalance of marine ecosystems.

To produce one pound of meat, an animal needs to consume as much a 10 pounds of grains that could be consumed directly by humans. Imagine how many people around the world we could feed if we stopped giving the bulk of it to livestock that will in turn feed just a few. We are literally living high off the hog while other countries are starving.

1.4 billion tons of solid fecal matter is produced by US farm animals per year and it is often left outside in open pits or pools that seep into groundwater, lakes and rivers. Because the animals are often diseased, and injected with hormones and antibiotics this renders their waste toxic and not suitable for fertilizing crops.

Livestock are responsible for over half of the country’s erosion and sediment issues. They are destroying the land they graze upon and rendering it useless for growing.

The global livestock industry is responsible for more greenhouse gas emissions than all the planes, trains and automobiles in the world combined. Yes we should feel good about our decision to bike instead of drive or use LED light bulbs but when we eat meat with every meal we are cancelling out the good we did in other areas.

This doesn’t even begin to cover the health issues we experience as a result of eating meat..for that side of the debate read my post over at Goddess of the Garden, Why Meat Consumption Is Bad for Your Health.

So should we all go vegan or vegetarian? Well, you certainly could…I know I lean more in that direction every day but in actuality you don’t need to go quite that far.  I love this post from Green Living Tips that shares a plan to only eat 3 meat meals a week. Many of us were raised in homes where meat was the centerpiece of every meal but it doesn’t have to be. Meatless meals are making a comeback. Try to make it  goal to only eat meat 3-4 times a week and go veggie the other nights. Slowly work toward that goal if you have to.

Cutting down or cutting out meat is a win-win-win situation. It helps in the fight against global warming, and environmental destruction and it’s good for you. Not to mention all of the animal cruelty issues it brings up. Watch a couple videos along those lines and you just might find the inspiration you need. If you do eat meat, it is soooo important that it be organic and raised by small scale ethical farmers. Same for other animal products like cheese and milk. But that kind of meat is expensive so factory farmed “cheap” meat is what most people buy. The video below illustrates what you are supporting when you buy that meat. It is graphic but if if you eat meat…you need to watch it.