↑
You are here: Home / Natural Toys / Arthur Saves the Planet & Worm Up 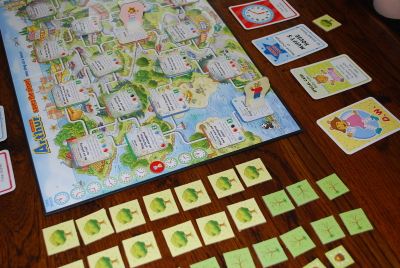 This weekend the kids and I broke out some board games. I needed to keep them occupied and quiet so that daddy could try and recoup after a small bit of elective surgery a couple days ago. Games are a favorite in this house. We played Arthur Saves the Planet and Worm Up. They are both FRED distribution games.

Well, I am just going to come right out and say that I didn’t care much for either game. They didn’t impress me in the least.

Arthur Saves the Planet has a nice design with a beautiful board and a great concept but i found it VERY confusing. There are two different sets of rules, one for younger kids and one for older kids. Of course you really can’t understand the rules and setup for the younger kids game (the one we wanted to play) unless you read both sets of rules. Even then I was hopelessly lost. This is the official description:

Arthur and his friends & family work together to solve environmental issues threatening his hometown of Elwood City. From littered beaches to endangered tree frogs, from deforested parks to wasted water, the team has its work cut out for it. And ANYONE can help! Pick an Arthur character and collect colored resource cards representing time, expertise, friends, effort and advice. Use these wisely to solve the many challenge cards and, in return, receive tree seeds to help restore Elwood City back to its natural beauty!

I didn’t quite understand how to move about on the board or solve challenges, despite reading the instructions multiple times. I feel fairly comfortable saying that I am a pretty smart gal so I think this game needs a serious redesign. We muddled through it as best we could but some of the solutions to the “problems” were kind of silly in my opinion. The solution to animal extinction for example was to adopt an animal. Uhm…okay. I would have never thought of that…most times I think those animal adoption things sound kind of scammy. We ended up reading through all of the challenges and discussing the solutions but the game in general was a bust.

If you play with older kids and actually understand the instructions you may have a better time of it than we did. One thing I did like was the non-cheesy language. It really did address important issues instead of acting like all environmental woes can be fixed by turning off lights.

Worm Up was the second game played. It has wood pieces so that is a plus but overall I didn’t really care for it.

You play by choosing a color and assembling your worm using 7 colored discs. You have a start line and a finish line and you race another worm to the end. You race by choosing a number tile that has the amount of spaces you want to move…oddly enough the only choices are 4, 6, 7, and an X wild card. You choose a number and bid against the other player. If both players did not bid the exact same number you can move by taking discs from the back of the worm and adding it to the front, thus moving it forward. You can also curve your worm to block an opponent. The bidding format is what bothered me. It seemed easier to me to just use ALL the tiles regardless of color and lay them face down and then have the kids choose one at random, leaving it to chance instead of bidding.

As it was my 4 year played my 8 year old and the 8 year old always chose the number 7 tile and my daughter mixed it up so it is easy to see who won. He only understood that he wanted high numbers and she didn’t really get it. This game would be better for kids age 10-14ish IMO but by that point it may be to babyish for them.

We also played the Learning to Share Fun Park Game. 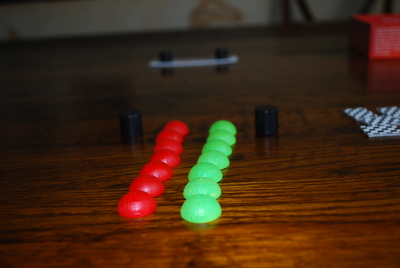