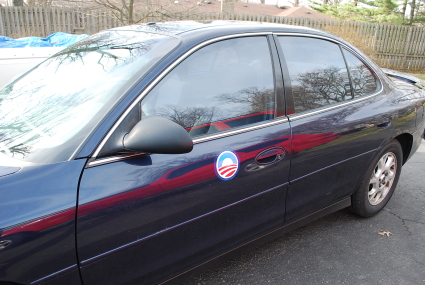 Yesterday I was driving to pick my son up from school and I was sitting at a light behind an aging, maroon colored car. I could see from their temporary plates and dealer plate holder that they had just bought the car and at that moment I realized that I have changed so much on this green journey of mine. I have always been something of a car snob I guess. I liked new cars with that new car smell and every car I have had was fresh from the factory with that stylish car payment that says “I am so successful that I can afford to waste money on something that will depreciate significantly just by driving it off the lot.”

It only took about a year before I was upside down on car worth versus loan amount still due but hey it was a NEW car. When the car started to look not so new it was time to trade in and when I got married of course both hubby and I both had to have our own cars. Then we started trying to live with a lighter eco footprint and we bought a used vehicle. About two years after that we decided we needed something with better gas mileage even if meant downgrading to a car once again… like we had pre-kids.

Since hubby’s vehicle was a company owned 18 wheeler I got to choose my new-to-me car and I chose the one above. It was an 8 year old car in great condition with only 40,000 miles. It had a sun roof, a remote starter, lots of trunk space, and it cost half of what I would usually spend on a new car. I did initially get a loan on it but I paid it off after only a couple months. I love this car and I plan to keep it until it tanks out on me. Just this week I had to put out $500 for a new tie rod, internal maintenance, and four new tires but considering I have no car payment and good gas mileage I am happy as a clam…I just passed 100,000 miles.

When I saw that rather ugly maroon car in front of me yesterday my first thought was COOL. I wondered if it ran well and how many miles it had. I realized that I now have a used car mentality. Gone are the days when I see a new car and get a twinge of jealousy. Now I just smile to myself and remember that I have a car that meets my needs and no car payment. I also have a more affordable car insurance premium from buying used, though I know this can vary by car model. I am not throwing away my money on bank interest or higher insurance rates, and by buying used I am recycling. That feeling is so liberating I can’t even describe it.

Another good feeling comes from deciding to only have one vehicle. When my hubby quit his trucking job we had a little problem…two people, one car. But we really didn’t want to buy another car so we found some work arounds. Hubby got a night job so we both had the car when we needed it. I found that at first I was irritated about not having a car from 4:30 PM to 8:00 the next morning but quickly I realized that it was saving me money. I stopped making quick shopping trips to pick up “one” item that quickly turned into a shopping cart full of crap I didn’t need. I also couldn’t get lazy and decide to take the kids out to eat if I didn’t feel like making food. It turned out to be a blessing.

But then the economy tanked and my hubby was switched to day shifts. This was very bad for us since we now had two children in two different schools that did not have bus service. It wasn’t feasible to drive my husband to work since I would have to get the kids up at 4:30 in the morning so they could ride along. We were going to be forced to buy a new car and I was really bummed. But we got creative and borrowed a car for 3-4 days a week until he got switched back to the night shift (this week). I did end up buying a used motorcyle as a backup for good weather days too. The gas mileage on it will be a big money saver for us in the summer months.

At some point we may decide to become a two car household again but I am confident that we will do it only if it becomes necessary and not because it is merely convenient. I am also confident that we will not get sucked back into the new car consumer trap until the time comes when green car technology really does make a new car the more eco friendly option. As it is now, it is just more eco friendly to buy used.

But it is very nice to catch yourself mid thought and realize…I am not the same person anymore… in a good way. ;)