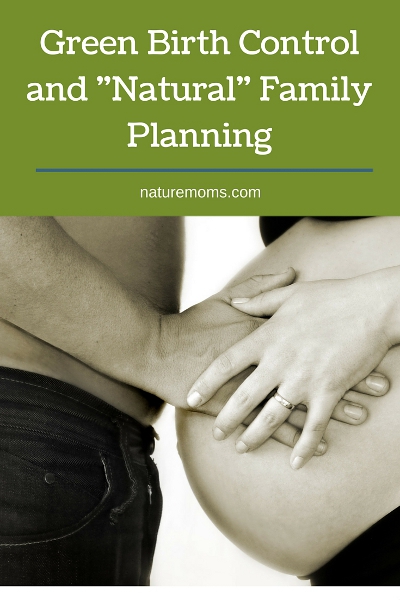 One area that many overlook on their journey to go more green and natural is family planning. Few of us likely have the emotional and physical strength as well as the resources to go through life without trying to prevent pregnancy at least at some point in our lives.

So what is the greenest and most natural way to prevent pregnancy? This is one area where I gravitated to the more natural options even before my natural family living journey actually began. I had strong opinions about some of the more mainstream birth control methods. Let’s look at some of the options and I will tell you what I decided upon..

Chemical Contraceptives– When my future husband and I discussed birth control methods and family planning for the first time we found we were on the same page as far as family size was concerned. We were not on the same page about how we would prevent pregnancy though. The most common method it seems for young women, then and now, is oral contraceptives or other chemical-hormonal contraceptives like the IUD, various injections, the patch, and internal rings. My husband assumed I would not have a problem with these methods but he was very wrong.

I wasn’t trying to lead a natural or green life yet but I knew with 100% certainty that I would NOT take hormones or use chemical contraceptives. I wasn’t going to introduce these things into my system and mess with my body in that way.

These contraceptives have many side effects, they increase chances of serious diseases like cancer, and using them supports the corrupt and powerful pharmaceutical industry. All of this makes them a not-so green choice and for me an unacceptable choice.

I wasn’t on board with copper IUDs either. While copper itself is natural… unless we are born secreting it in our uterus then it is not “natural” for birth control, at least for me. The most common side effects are heavy and prolonged bleeding and loss of sex drive. Niether of those potential side effects was acceptable to me but this option is way better than the hormonal ones.

Barrier Methods– Barrier contraceptives would be condoms, diaphragms, cervical caps, sponges, and spermicides. I have no personal experience with any of them other than the sporadic use of condoms over the years… usually a couple months after birth when I didn’t want to take the chance that breastfeeding alone would prevent pregnancy. They are not-so green in that they create waste and they are not-so natural in the materials they are made with but they are important in the grand scheme of things (STDs).

Sterilization – If you are positive you don’t want to have any children or have any MORE children then this is a good route to go. My husband and I opted for him to have a vasectomy a couple years back so our baby making days are over. I actually wanted to be the one to get sterilized but after my abdominal surgery (cancer) I had too much scar tissue to make a laparoscopic surgery possible. They would have had to cut me open again to get at my tubes and another major surgery did not sound appealing.

For anyone thinking about doing this, the best time to have it done is after the birth of your last child. Typically they ask after baby number three if you want to have it done. I said no when they asked because they caught me by surprise. I hadn’t even thought about it or discussed with hubby and I ended up wishing I had said yes. Make sure to have this discussion beforehand and save yourself the time and money.

Incidentally I also found this to be a controversial method. When I shared that my hubby and I had opted for sterilization we got some nasty comments from deeply religious folk who thought we were hell bound for discarding the gift of fertility. I never knew it was such a hot issue until that time. Also, while some may argue that it is not the most “natural” route to go it a very green option and it can be a huge stress reliever to not have to worry about pregnancy anymore. This is especially true if pregnancy would be inadvisable for health or economic reasons.

Natural Family Planning– Also called NFP and the fertility awareness method. This is the primary method that my husband and I used. It is by far the most natural and green choice and it is IMO actually VERY easy. Using NFP my husband and I had 3 babies over an 11 year period and none of them were accidental. Of course that is not to say they were planned either… one was and with the other two we were aware that their conception was likely and we were okay with it either way. When we wanted to prevent pregnancy we did and only rarely used condoms when my cycle was a question mark… like after birth, during breastfeeding.

Basically Natural Family Planning or NFP limits sexual intercourse to naturally infertile periods or portions of the menstrual cycle when pregnancy is unlikely. Various methods can be used to identify whether the woman is likely to be fertile and this information is used to either avoid or achieve pregnancy.

The two main methods are calendar based NFP and symptom based NFP or a combination of both. Using the calendar method you would track the days of your cycle on a  calendar (or Cycle Beads) and based upon an understanding of how the reproductive cycle works you would engage in sexual activity accordingly…. or not.

I used a combo of both systems with an emphasis on the symptoms based. I was bad at remembering to track my cycle via a calendar. But I found it easy to discern fertile times by tracking cervical mucus and ovulation pains. I knew my body pretty well and I remember the month we conceived my daughter. I mentioned to my husband that the cervical mucus says this is a good baby making day. While we hadn’t been trying to have a baby we didn’t see any reason to try and prevent it either… we ended up with a beautiful daughter 9 months later.

With our youngest son it was similar. I was about to go on an extended vacation with our two kids and since I wouldn’t see hubby for over a month we celebrated before my departure. I knew, thanks to the texture and color of cervical mucus that I might come back from vacation pregnant and I did. I knew that if I wanted to avoid pregnancy I could abstain or use a condom. It was easy, for me at least, to track my fertile and infertile times and plan accordingly.

All in all I think NFP is the greenest and most natural way to handle birth control followed by sterilization. Barrier methods definitely have their place and we have greener and more natural options in that arena too. I can’t get behind hormonal and chemical contraceptives for health reasons and will be advising my own daughter to steer clear but to each his own right? What is your take on this issue or your experience with any of the methods I have discussed? Comment and share your stories and tips.