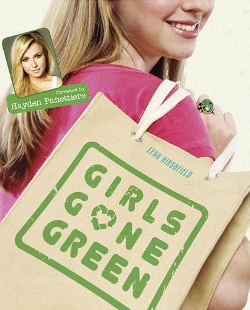 There are so many “green” books on the market and I have read so many that I am usually doubtful that any new green book will able to capture and hold my interest. Often times I decline to review them when I get emails from publishers because I have no desire to read the same information a dozen different ways… sorry but its true. Which is not to say that they won’t be perfectly good books, they are just for a different audience usually… someone who is new to green living. I am not new to green living and would say I am instead experiencing green fatigue in some ways. I am bombarded with so many green products and so much information that something has to be really special nowadays to catch my eye. This month my email inbox has been flooded daily with hundreds of PR pitches trying to get me to blog about their products or their ideas that I have been ready to curse Earth Day. I kid you not I got a pitch from a corporation that wanted me to label them green simply because they sent a memo to their employees recommending they read green books, like The Lorax, to their kids. WTH?

I got several book requests leading up to Earth Week and a few of them sounded promising. The first two would qualify as books that REALLY impressed me. They took a relatively unexplored green angle and created a captivating book that green newbies AND the more experienced greenies will both find interesting and that is a tough task if you ask me.

The first is GREEN American Style by Anna M. Clark. As the name would suggest this book talks about green living from anAmerican perspective and the religious, societal, and political roadblocks that are before us in making any great green changes. It explores why we are spoiled as a country even if we don’t want to own up to it and why that hinders our ability to think globally. BUT it is not an America bashing book. Quite the opposite is true in fact. It makes and excellent case for why going green is the most patriotic thing we can do and why citizens who love this country SHOULD be on the frontlines of environmental action.

I love political discussion and this book was a very interesting read in that regard. Any party opposed to environmentalism is a party against their own country IMO. Our heath, our wealth, and our national security are all at stake when we trash our environment and the next great thing our country needs to do is become sustainable and independent of foreign energy needs. People of all parties should read this book, I dare them to find fault with the logic.

Also discussed was religion and its role in green living, which up to this point has been sadly lacking. The author shows how the movement is gaining ground among many faiths as they see that dominion over the earth is no excuse for exploitation and abuse. As a a secular reader I found it all very interesting and she mentioned her approval of the Green Bible that I blogged about while back, several times. I just really like the concept. Anyway, it has resources for anyone who wants to try and bring green initiatives to their local church.

I highly recommend it for anyone wanting to read more about common sense green politics as well. I am a liberal on the social issues and more conservative on the fiscal issues and I agreed with pretty much everything in it. I think all political parties would enjoy it.

The second book I wanted to shout out is called Girls Gone Green. I can’t say enough good things about it!! It is all about Green Girl Power! LOL. It is basically a collection of essays written by women and younger girls who have seen a need or a problem and taken action to fix it. This could be a local issue or a global problem, whatever it was, they stepped up to the plate to tackle it. I think the target market for this book is probably young women… tweens through early twenties but I love it.

The book is broken up into sections for The Beauty Entrepreneurs and Fashionistas, The Animal Advocates, The Educators and Artists, The Recyclers, The Growers and Grocers, The Defenders of Air, Land, and Water, and the Environmental Scientists and Green Engineers. Each section has some stellar examples of women who have become champions and activists in this area. Most are just ordinary, every day gals but there are some celebrity stories mixed in too. I was very pleased with the celebs they chose, such as Ellen Page (Juno) with her planting parties and Alicia Silverstone with her animal advocacy work. Hayden Panettiere wrote the forward, and she is a classy young lady who came on to my radar not so much for her work in Heroes but for her role in The Cove and Save the Whales. The Cove is an awesome movie BTW!

If you have a teen or tween girl in your life, or maybe a new HS or college grad, this book would be an awesome and inspiring gift. A+++

Another book I read about the same time is Shift Your Habit. It is a good book but not anything really new among green books. It is basically a big run down of all the ways you make some small change or shift an old habit and save money while going green at the same time. It will definitely appeal to the more frugal minded among us. It has lots of great tips and ideas.

And lastly, I read several books with my kids from the Little Green Books Collection. They are really cute but mostly only really appropriate for my 4 year old. My 9 year old took off at the site of baby books and my 6 year was only mildly interested. The books themselves are made with 100% recycled materials and that is perhaps why they are bit dark and rampant with earth tones but I liked it. We read My First Garden which teaches colors using a gardening theme, What Do You See, a flap book which encourages nature exploration, and Don’t Throw That Away.

The Adventures of a Plastic Bottle also by Little Green Books was enjoyed by my older kids and ignored by my youngest so this one is for older kids generally I think. It is good they have books for many age ranges that encourage green kids.