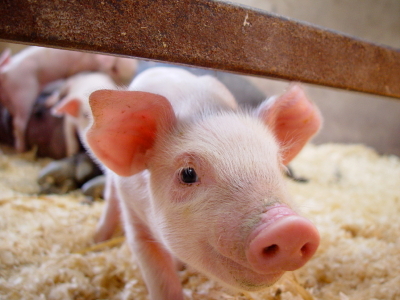 Last October I posted about Ohio Issue 2 and why I thought it was a monumental mistake to vote yes on it. Basically it gave agri-business representatives and their appointees the ability to create an agricultural board with unchecked power over livestock rules and regulations. It passed in Ohio, which is no surprise because this is an agribusiness state.

But imagine my surprise this week when the conservative vote to appoint this Animal Care board and block animal rights legislation has now come full circle to bite them in the behinds. I did not see this one coming!!

Our lovely Governor here in Ohio, Ted Strickland, came to a deal with that board along with the HSUS (Humane Society) and have committed to recommend the enactment of a series of eight landmark reforms on animal welfare. These regulations would phase out battery cages for chickens, hog crates, and veal crates. It would also effectively ban ownership and breeding of many exotic animals (think tigers, bears, alligators, venomous snakes, etc.) and it would deal a serious blow to puppy mills and dog breeders.

I never would have imagined that this board would essentially “sell out” the farmer’s and animal breeders that put them into power and strike a deal with the bleeding heart liberals. It is a HUGE step to facing animal cruelty issues that plague farms in Ohio. I am certain it has much to do with a certain video of a dairy farmer in Ohio that was released about a month ago. Voters decided to trust agri-business in Ohio when vocal farmers stood up and said that this board would protect small family farms and that farmers were uniquely positioned to know what is best for animals and that they will not allow blatant animal cruelty. A video showing the owner of a prominent dairy farm stabbing baby calves in the face with a pitchfork and pummeling them in the face with a fist up to forty times, has perhaps made voters aware that we cannot trust this industry to regulate itself.

HSUS was set to put a new bill on the Ohio ballot and instead of letting that happen.. this compromise was made. This is an awesome move by our Governor. Go Teddy!

In other animal rights news… California deserves props too! I saw this on Huffpo today:

Gov. Arnold Schwarzenegger has signed A.B. 1437, a bill backed by The Humane Society of the United States that requires that starting in 2015 all shell (whole) eggs sold in California must come from hens who were able to stand up, lie down, turn around, and fully extend their limbs without touching one another or the sides of an enclosure. In other words: California will become a cage-free state.