↑
You are here: Home / Healthy Eating / Raising a Vegetarian: A Matter of Choice 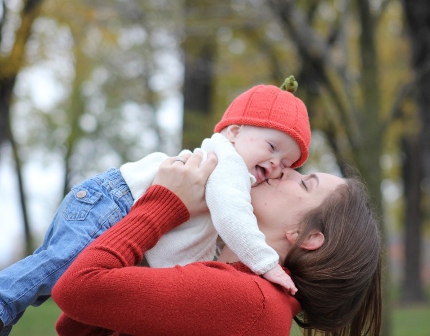 My pregnancy with my daughter was unexpected. My husband (fiancé at the time) and I planned on having children eventually, but hadn’t given much thought to it, since we thought that “eventually” was still a few years away. Sure, we’d spent enough time discussing our views on parenting that we were confident we were mostly on the same page, but we certainly hadn’t nailed down the specifics.

As I spent time researching all the choices out there, I’d come to him with what I’d learned, sometimes nervously anticipating his reaction. I knew he supported breastfeeding, but for how long? What would he think about child-led weaning, or nursing in public? I knew that he was an environmentalist to some degree, but would he think cloth diapers were taking it too far? What about co-sleeping and bed-sharing? Would he be on board?

Perhaps the most nerve-wracking discussion of all was about what we’d feed our daughter when she was ready for more than my milk. He understood and supported my vegetarianism. He was a vegetarian himself when we first met, and willingly agreed to maintain a vegetarian household when he moved in with me. What about our daughter? Would he support a vegetarian diet for her, too?

My nerves were un-warranted. His main concern was that our daughter would not feel pressured into maintaining a dietary choice such as vegetarianism against her will. We agreed to raise her as a vegetarian until she is old enough to comprehend the process –all the way from living breathing animal to lifeless cut on a plate- by which meat becomes meat.

So far, for the most part, it’s been a rather simple parenting choice to uphold. We’re both mindful and knowledgeable enough about nutrition to ensure that she gets everything she needs from a vegetarian diet. Our own parents, while they may not understand our decision, are respectful and supportive of it. Our part-time daycare provider does a great job of communicating with us about the lunch menu at daycare. When meat is on it, we provide our daughter’s lunch.

Of course, we get the occasional good-humored “joking” comment that our daughter “looks like she wants a hamburger” or that she’ll rebel by marrying a butcher. We sometimes get curious questions about what she eats. I always answer that she eats whatever I eat, and that I eat whatever I want!

There is a misconception that vegetarian diets are complicated or include lots of strange foods. Yes, we eat things like tofu and tempeh, but I find those far less strange to eat than liver or legs! At 14 months old, my daughter enjoys everything from burritos to lasagna, stir fry to omelets, sandwiches to spaghetti, and stew to curry. She even gets to eat typical kid fare like “chik’n” nuggets and pizza.

At this point in her life, it’s relatively simple to control what she is offered and exposed to. Since we fix her plate for her, it’s easy to avoid having meat within her reach. I’m sure my mom feels like I’m playing twenty questions when I inquire about what they’ll be eating while my daughter is in her care, but non-vegetarians don’t always think of obscure non-vegetarian ingredients like gelatin in marshmallows or meat-based broths in “vegetable” soups.

As she grows more curious and independent, we’ll need to be ever more vigilant about what goes into her mouth. She might mistake an actual chicken nugget or hamburger for the convincing veggie substitutes she’s accustomed to. When she starts asking why certain foods that other people eat (even her father, occasionally) are off-limits, we’ll begin explaining in an age appropriate manner that we value animals as friends, not food, and start making basic connections between the animals she sees on the farms on the drive out to her grandma’s house and the food items that we’d prefer she pass by until she fully understands them.

The main argument that people make against our decision to give our daughter a vegetarian start in life is that it should be her choice whether or not she wants to be a vegetarian. I couldn’t agree more. I won’t deny that if the day comes that she decides to add meat to her diet, I’ll be a little bit sad, but I will support her decision so long as it is an informed one. By raising her as a vegetarian until she can make that decision for herself, we are giving her a choice: a choice to have been a life-long vegetarian from conception, a choice few people are offered. I’m confident that whether she grows to embrace my vegetarian values or not, she’ll appreciate and have respect for where her food comes from, an appreciation and respect that is all too often lacking in the world today.

Joella writes Fine and Fair, a blog of letters to her daughter. Fine and Fair is focused on the ups and downs along the journey of raising her daughter as a responsible citizen of the world with the values of compassion toward all living things, environmental responsibility, conservation, and celebrating diversity in all of its forms. Fine and Fair can also be found on facebook and twitter.