↑
You are here: Home / Health & Healing / The Dangers of Soy 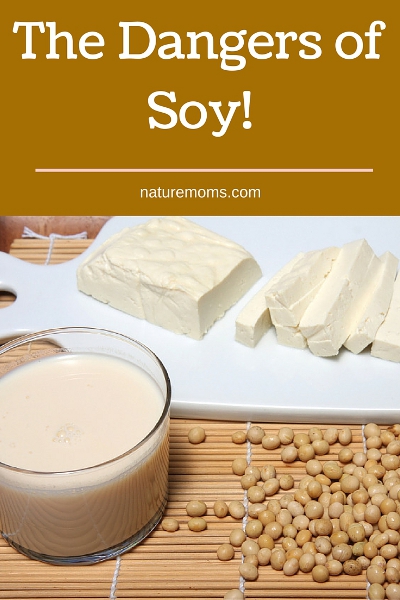 Every day there is more research being released about the dangers of soy in the diet, and if you aren’t already concerned about what has been discovered, the newest research will have you looking at soy in a whole new (and not necessarily good) way. I have long stayed away from soy but sadly in March 2011 I started eating some soy and did not even realize it… the results of this little oops have been a complete nightmare, but more on that later…

A Short History of Soy

Soy is a rather mundane plant that has recently seen an eye-popping increase in popularity. While soy farming originated in China back in 1100 BC, it was not grown for humans, but for animal feed and to help build up the fertility of the soil in between other harvests. In fact, soy beans were not considered fit to eat (for humans) until the Chinese discovered a way to ferment them; a process that made them digestible.

Today you’ll see that soy – fermented soy – is part of Asian diets in things like natto, miso, tamari and tempeh. Even so, Asians eat approximately 10-20 grams of soy on any given day. That is the equivalent of two+ teaspoons of soy (and fermented soy at that), and what they do consume is used mostly as a condiment to sprinkle on or add to other dishes, like soup. Interestingly enough, there is good reason to believe that the large amounts of soy recommended to Americans by soy manufactures (about ten times of the amount of soy found in the Japanese diet) can actually be harmful to your body.

So just what is the problem with soy? Well, for one thing soy is higher in phytoestrogens than most any other known food. A phytoestrogen is a plant-based estrogen that mimics the estrogen created by the human body (large amounts in women, smaller amounts in men). While there have been studies done to ‘prove’ that the phytoestrogens are good for you, the truth is that most of the studies conducted were financed and ordered by the soy manufactures, and independent researchers have shown that phytoestrogens consumed by humans who are already producing estrogen, can be dangerous to many of the body’s systems.

In fact, there is suspicion that the increasing numbers of breast cancer, endometriosis, uterine fibroids, infertility and low libido may be related to the increase in phytoestrogens. Interestingly enough each of these conditions is known to stem from unopposed estrogen (or estrogen dominance) in the body, and we’re starting our children off early by having them consume soy formula.

A frightening fact is that if a baby consumes the recommended amount of soy formula in a day, they are ingesting the equivalent of four birth control pills worth of estrogen every day. This fact alone may very well account for the increasing number of young girls entering puberty before the age of ten.

A not well-known danger of soy is that it is goitrogenic, or thyroid suppressing. A goitrogen works by preventing your thyroid from getting the amount of iodine it needs, eventually leading to thyroid failure. Once the thyroid starts to fail you gain weight, begin having mood swings, get cold and tired easily and start having problems remembering details. It can turn into a right nightmare, and is not something that you want to play around with.

A Phytate is an enzyme inhibitor that blocks mineral absorption at the level of the digestive tract. Phytates can be found (naturally) in all grains, seeds, nuts and legumes, all of which either need to be processed, shelled, soaked or in some other way processed in order to make them digestible, but soy contains such a high amount of phytates that it is nearly impossible to get rid of them. In fact, the only way to make soy digestible for humans is to ferment it. Fermented soy products include miso, tempeh, natto or soy sauce (tamari).

As if the concerns listed above weren’t enough, soy is also high in trypsin inhibitors. Trypsin is a digestive enzyme that enables us to digest protein. Without it eating protein produces all sorts of side effects such as diarrhea, bleeding and stomach cramps.

So What is the Solution? It would be very easy to say that soy should be banned as a food product, but maybe we should take a leaf from the Asian’s book and treat soy not as a staple of our diets, but as a condiment that can be eaten in small amounts, but otherwise avoided so as not to open ourselves up to the multitude of problems that too much soy in a diet can cause.

So what has my experience been? Well I found out first hand about how soy is goitrogenic. In March I did two new things… I joined a gym and started eating eating a pre-workout protein bar. I picked some up initially just to try and loved the way they tasted. I wasn’t looking for performance enhancement just something that would be good fuel for morning workouts because I struggle to have an appetite for breakfast. Eating nothing until after 2:00 PM is not a good idea anyway but eating nothing and then working out for 2 hours seemed like a really bad idea. Since I don’t usually eat much processed food other than some Chobani pineapple yogurt it never even occurred to me to read the ingredients list. I eat whole, fresh foods so I never have to! Even so, it was a total bonehead thing for me to do.

I won’t name the bar specifically since it really doesn’t matter. I have since found out that 95% of those workout/health bars are loaded with soy, as was the one I was eating. I started out eating 1 bar 3 days a week and then I started eating them daily. By the end of month two I noticed my hair was falling out. Not little strands here and there but alarming chunks. I also noticed that I had 3 consecutive and supremely awful menstrual cycles. My periods are usually very uneventful. I don’t even get cramps so I had no idea what was going on but then toward the end of the third month was looking over my SparkPeople menus from previous months and found that my symptoms coincided with my joining the gym and eating those bars. It was a light bulb moment.. thank you SparkPeople! They deserve a separate post.

Anyway, I immediately went to the ingredients listing on the bars  and saw the soy. Case solved… I had been eating daily doses of unfermented soy and the plant estrogens were wreaking havoc on my body. But what exactly did they do? Well, I went to the doctor and had some blood drawn. The results were not good. I had become hypothyroid and they wanted me to take medication pronto. The goitrogenic soy combined with 3 weekly chlorine baths in the gym pool (chlorine blocks iodine receptors in the thyroid gland) had led my thyroid to malfunction.

Now I must disclose that hypothyroidism is rampant in my family… my father and older brother have it but I think a healthy diet kept it at bay for me until I royally screwed up. I have since read dozens and dozens of articles that link soy consumption to thyroid problems so I feel confident that is was the major culprit. Plus I felt great before the soy experience. Now I am kind of unsure of my next move. What I want to do is ride this out for awhile and see if a healthy diet can reverse the issue but frankly the thought of losing any more hair scares me. I tried the medication they gave me with much anxiety but stopped taking it after it made me all flushed and gave me a rash. And it made me tired which I never felt beforehand and that is what supposed to be what hypothyroidism does. Confusing much? Pharma meds and I don’t get along well and never have.

Read my follow-up to this post here with Natural Ways to Improve Thyroid Function. I also tell you about another soy caused health problem.

The Whole Soy Story: The Dark Side of America’s Favorite Health Food