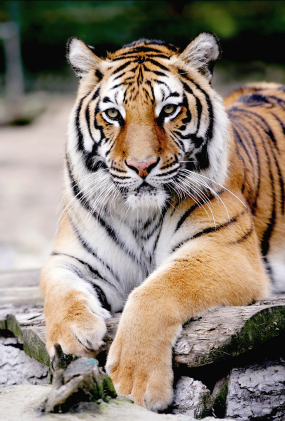 If you have been watching the news you may have seen a story about what happened in Zanesville, OH yesterday. Zanesville is less than 50 miles away from where I live (and we have family there) so I watched with horror as this all unfolded. A man who was incredulously permitted to own well over 50 exotic animals decided to let them loose and then take his own life. Before he killed himself he opened cages for 48 animals including grizzly bears, wolves, lions, Bengal tigers, and chimps.

I don’t know what the man was thinking but if he thought he was doing them a kindness by setting them loose then he was very much mistaken. When it was discovered what he had done it was dark and the weather was stormy. This meant that authorities had little choice but to shoot and kill all the animals they could find. Then the next day they killed the rest, minus a wolf or two that are still at large. I was so sad all morning after I found out that the solution was to kill all these beautiful animals. I know we couldn’t allow them to roam free and then freak out on innocent people but still… it breaks my heart.

And then after the sadness came the anger. What you may not hear on the news is that our current Governor and the local authorities are responsible for this.

I am pretty disgusted with my state right now. We USED to have a kick ass Democratic Governor and in January he put an emergency ban on exotic animal ownership in Ohio. This did not apply to those who already owned them BUT it also stated that any current owner who was convicted of cruelty to animals would have their animals confiscated. Our new Republican Governor decided to let this ban expire and he tabled it. This angers me because I don’t believe any citizen should be able to decide they want to keep Bengal tigers and Grizzly Bears in their backyard… it is insanity and it is cruelty to animals. This man supposedly had 18 Bengal Tigers!!! 18 for cripes sake… all dead now. If our law enforcement officials and our Governor were not total dunces, legislation would have been in place AND these animals would have been removed from this man’s property since he was convicted of cruelty to animals in 2005.