↑
You are here: Home / Tidbits / Proposing Without a Diamond 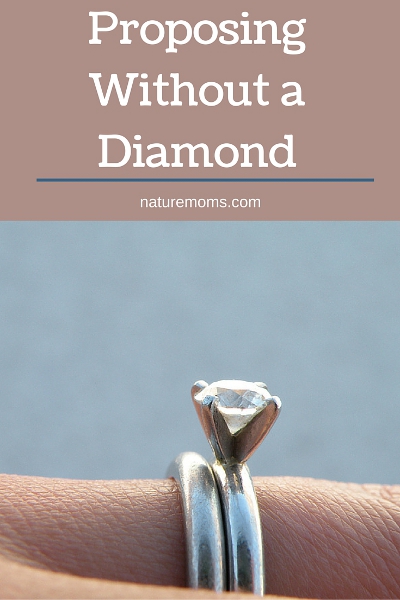 It has been said that diamonds are one of the biggest marketing scams in history and I would have to agree. It is a modern tradition that men are supposed to present a woman with a diamond when they pop the question. The bigger the diamond, the more love there must be. Personally I am not sure why women have even allowed such a thing to become tradition (in this age of feminism) as it smacks of being “purchased” or bribed.

Even worse is the fact that the practice of buying a diamond was all instigated by a clever marketing campaign in the 1930s by De Beers, a diamond jeweler. A clever campaign turned into societal expectation and yet most people seem content to keep the scam going. Why??? Why have we allowed ourselves to be psychologically conditioned by companies out to take our money. As a society we have been tricked into coveting sparkling pieces of carbon and that trickery is long running, almost a century. Perhaps it is time to put an end to all the nonsense.

It isn’t just the fact that we have been duped that should get your ire up. There is also the fact that the diamond industry is pretty terrible. Diamonds are way overpriced and they lose their value after sale. The mining process is dirty, nasty, environmentally destructive, and it infringes upon the rights and lives of others. Slave labor is often used to bring diamonds to us…many times child slave labor and they are used to fund civil wars and conflicts in which many people die. The diamond trade has also be linked to arms deals and the sex slave trade. The term blood diamond does seem to be a fitting moniker and it is the last thing that should be seen as a traditional symbol of love.

The use of a diamond in an engagement is nothing but a sign that you have been brainwashed by a corrupt corporate entity. Couple that with the atrocities that occur in order to bring diamonds to a jeweler near you, and everyone should be asking…

Why in the blue blazes are we still buying diamonds???

But it is not that cut and dry right? Well, I think it should be but awhile back I brought this topic up with some friends and some of them were not too keen on discussing why a diamond might be “wrong”. I heard comments about it being traditional (even though it’s actually not), how it is romantic, and how it may be the one and only nice jewelry piece they may own. Some also said it would be humiliating to tell others about their engagement without the rock. People would look at their hand and wonder why they were marrying a loser who couldn’t buy them a ring. It seems that many women may not be ready to let go of the diamonds.

That got me thinking what a couple might do to honor each other and the lives they want to to build together OTHER than spending money on diamonds. I like ideas that include something for both parties instead of just the woman. Guys are getting the shaft. They have to buy a shiny bauble to show their devotion for us but what do we do for them?? Show up?

I have a few ideas below…

6 months of premarital counseling – Nothing says romance like therapy right??? Okay, maybe not. It does however, make good sense. So many people today get married without any real clue who their partner is. OR they overlook things thinking “that can be changed”.  Well instead of spending money on marriage counselors after the marriage is broken, spend the money up front and really learn about your partner before you exchange vows.

A pre-scheduled vacation – Pay for a grand vacation and schedule it for your first anniversary. I think any woman with good sense would rather have the promise of two weeks at a bed and breakfast in Italy or Greece instead of a diamond ring. Plan something fantastic together and put that money to some use in creating memories.

A round the world airfare ticket for two – This is another spin on the vacation idea. If the two of you love to travel you can’t go wrong here.

A big ticket item – A big something that both of you would enjoy and use…a used car, a piano, a four poster bed, new furniture, etc.

A year of date nights – Either get creative and pre-plan/pre-pay or simply set the money aside for this purpose. For a year after marriage you can have a grand date night or date weekend, once a month. Check into a local B&B or hotel, get the his and hers massage package, eat at restaurant you have always wanted to try, and splurge.

An alternative ring idea – Use the money on two wedding rings that are sustainable, ethical, and affordable (skip the engagement ring). You can buy simple wedding bands that are made from recycled precious metals or you can buy used. There are also rings made of wood. I absolutely love the way they look, just take a gander at this Etsy store. Amazing!

Where do you weigh in on this? Ready to buck tradition and let love be enough or do you NEED the diamond?