↑
You are here: Home / Gardening / Natural Ways to Get Rid of Japanese Beetles in the Garden 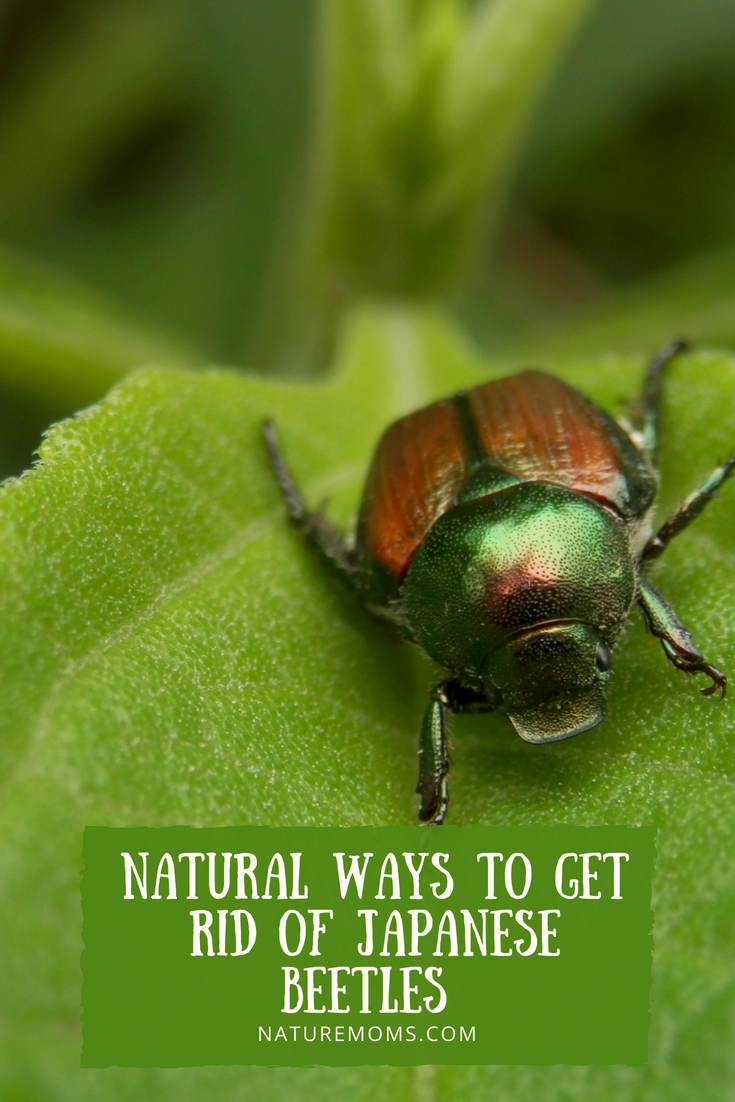 This is my first year fighting the dreaded Japanese Beetle. They are not quite as bad as the squash vine borer but very, very close. I suppose they have been in my garden all along munching on some kale here or there but I never really noticed. Then this year, I added a young cherry tree and BOOM they migrated to my yard and set up a permanent base camp. My poor cherry tree was being eaten alive! The leaves actually began to resemble lace rather than leaves.

These little buggers actually come from grubs in the ground and they can be quite difficult to eradicate which makes even the most ardent organic fan want to drop a pesticide bomb and then dance on their little graves. But doing that will kill more than just the grubs, it will also kill the beneficial organisms we WANT like earthworms. So what are you to do, to get rid of the beetles and save the earthworms? You need to learn about how they develop and how to kill them in each stage of life.

The grubs love to eat the roots of grass so if you see irregular patches of dead or dying grass…you will often find grubs there. Dig up the soil a bit and squish the grubs or better yet, feed them to your ducks or chickens. The best way beyond search and squish is to introduce Milky Spore (Bacillus Popilliae) to the soil. It is a disease that targets the Japanese Beetle grub and kills it. THE USDA claims that this spore can suppress beetle development while not being harmful to other organisms (ie beneficial insects, earthworms, birds, bees, pets , or humans). It will also not adversely affect water sources. When a grub dies due to exposure it then decomposes and releases more spores, making it more effective over time. It may take 2-4 years but then you could be sitting pretty (and without bothersome beetles) for a decade or so.

The spore mentioned above will not work on the beetle stage so you need to get rid of them in another way. The easiest way to handle them is to knock them into a bucket or bowl of soapy water. If you do it early in the morning when the the plants are covered in dew, they are less likely to be able to fly away.

You can also spray your plants with a neem based spray. You can get neem oil on Amazon and I use it on my apple and pear trees as well so always good to have on hand. Use as directed and apply frequently, especially after a good rain. There are some that would also suggest yellow traps but just as many others claim it attracts more beetles to your yard to begin with. It is an option though.

So in short, start with the Milky Spore to to develop a long term plan to combat Japanese Beetles. In the short term use neem, soapy water, and daily hands on action to try and eradicate these pests. Do both and eventually your kale and young cherry trees will be safe again. Hope this helps!