Way to go Los Angeles!! As of yesterday they have become the largest US city to ban plastic shopping bags, joining other eco conscious cities like Seattle and San Francisco. They have taken a stand and declared that consumer convenience can not be placed before the environment and plastic bags are a serious environmental problem. According to Business Week: The Los Angeles City Council voted 9-1 to require stores that make more than $2 million a year or occupy retail space … END_OF_DOCUMENT_TOKEN_TO_BE_REPLACED 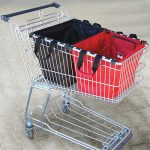 San Francisco's city council voted Tuesday (March 27, 2007) to become the first U.S. city to ban plastic bags from large supermarkets to help promote recycling. Under the legislation approved by the city's Board of Supervisors, large supermarkets and drugstores will not be allowed to offer plastic bags made from petroleum products starting in six months. All of this is being done to reduce the amount of plastic bags being consumed and ending up in our landfills and to encourage recycling. Since … END_OF_DOCUMENT_TOKEN_TO_BE_REPLACED