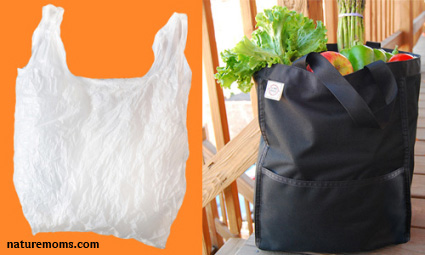 Way to go Los Angeles!! As of yesterday they have become the largest US city to ban plastic shopping bags, joining other eco conscious cities like Seattle and San Francisco. They have taken a stand and declared that consumer convenience can not be placed before the environment and plastic bags are a serious environmental problem.

According to Business Week:

The Los Angeles City Council voted 9-1 to require stores that make more than $2 million a year or occupy retail space measuring more than 10,000 square feet to phase out plastic bags by Jan. 1; smaller stores will have until July 1, 2014. Paper bags will be available for 10 cents, with proceeds going to the stores.

I am excited because LA is a trend setting city and this could give other cities the motivation they need to enact their own bag bans, which I fully support. Chicago and New York City may have something in the works already.

Freebie plastic bags are given away willy nilly all over this country and it has to stop. As society we have already demonstrated we aren’t mature enough to handle the responsibility that comes with accepting them. If we were, they wouldn’t litter our countryside and our oceans, threatening ecosystems and wildlife.

Do you support bags bans?? How do you feel about this decision in Los Angeles?