I don’t really talk about breastfeeding all that much on this blog but I really should because it is one of the most natural and “green” things you can do as a mom.

I have breastfed three kids now. My oldest only got 4 months of breast milk because I had to return to work and my place of employment was a big corporate office with a shared bathroom and my office was all glass in front. I would have had no place to pump so he was weaned a lot sooner then I would have liked. I STILL feel guilty about it.

3.5 years later my daughter was born and not a drop of formula ever passed her perfect lips. It was one of the happiest times in my whole parenting career getting to stay home with her and breastfeed on demand. I loved every second of it…well except that time she bit me and I had a huge, infected gash on my nipple. That sucked (no pun intended). ;) I breastfed her through my third pregnancy and after my last baby was born I was still nursing her. I would have continued nursing her and my youngest just as long as they wanted. I used to estimate that I had another 3-4 years of nursing left but that plan was foiled by cancer and my daughter ended up weaning at 2 years old and my son at six months. I didn’t even get to gradually wean them since I was in the hospital having my colon cut out and reconnected. My family got to wean two kids for me. Have I told them today how much I love them??

Reading the book Mama Knows Breast by Andi Silverman was a welcome trip down memory lane for me. Right away I knew I would like it after reading some of the informal, girlfriend’s style writing. The way she worked breast into many of the titles was cute too…Mama Knows Breast, The Breast of Times and Worst of Times, etc. The illustrations were awesome too and made me very nostalgic.

Ms. Silverman and I had different values as to length of time to breastfeed and tandem nursing but 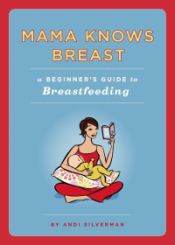 overall it is a good beginners guide to breastfeeding. It is not preachy and it doesn’t incite feelings of guilt.

Chapter one addresses the ups and downs of breastfeeding. I have romanticized breastfeeding so much I forgot about the downs but there a few, such as the fact that only you can feed the baby and there are many sleepless nights (at least in the beginning). The positives include bonding, giving your baby the best nutrition, and health benefits for mom and baby. The book also goes into the mechanics of breastfeeding, the lack of sleep issue, breastfeeding in public ( I was a shamelessly public breastfeeder), getting support from your spouse, your sex life while nursing, and the issue of weaning. It is a well rounded look at the issues that most commonly concern nursing mothers.

I really like the real mom anecdotes sprinkled throughout the book. Moms that have lived to tell about it are inspiring right? It was an enjoyable read, even if breastfeeding is part of my past now…sniff, sniff. :(