↑
You are here: Home / Health & Healing / Does Food Really Matter?

This morning I watched an incredible documentary called Food Matters. I 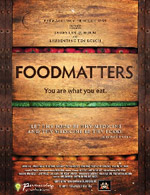 was enthralled from the first few opening seconds and hooked until the credits. I even watched the credits because they had some background music lyrics that were interesting too. This film is all about the “you are what you eat” concept.

Doctors today don’t receive very much training in nutrition and most patients believe there is a pill that cures everything. IMO and the opinion of the makers of this film…that is exactly the way the “sickness” industry… doctors, pharma companies, junk food companies, etc… want to keep it. There just isn’t comparable profit in health and wellness so the object is to make us sick and keep us sick.

As one gentlemen in the film, Andrew Saul said…”good health makes a lot of sense but it doesn’t make a lot of dollars”. I have many “what if” moments when I think what my life would have been if I had been educated when I was kid about whole foods, raw foods, organics, etc. and if those were the exact foods that had been marketed to me when I was growing up. If companies had been concerned about selling my parents or your parents, fresh fruits and greens instead of pop tarts….where would society be. We might have a healthier society but less wealth would have been created. It is the oldest trick in the book…create the “poison” and then “sell” the antidote. I often tally the cost of good health in my mind and then compare it to the cost of the chemotherapy I had at 28 years old. At $7000 a week for chemo and related treatment the costs are not even comparable. Add to that the 4 surgeries (2 major and 2 minor) I had that year. The REAL money is in sickness. Imagine if we had an epidemic of health? The pharma companies would be out 300 billion a year just in the US… they have ZERO incentive to push health on us.

One scary statistic is that since our food travels 1500-2000 miles to reach us and it is already a week old when it hits stores so we are lucky if we get 40% of the original nutritional content from that food. The food is probably already being grown in unhealthy, depleted soil to begin with. Add to that the herbicides, fungicides, chemical fertilizers, GMOs, etc…all the crap that is put in our food or done to it as it grows and we have a SERIOUS problem….a perfect recipe for sickness. A recipe that is profitable. It may not have gotten its start as something malicious but the fact that it continues to go on is IMO. 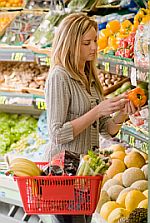 We take home these deficient foods and then cook them…destroying half or more of the remaining nutritional content they have and all the enzymes or “life” in the food. Interestingly in the video they mention that when we eat cooked food our body makes white blood cells in response to the food…reacting to what it considers to be no longer “natural” and taking a pro-active stance…as if saying “What is this crap? I need to be on guard in case this stuff is toxic.” Incredible…our bodies think “cooked” food is unnatural or an invader.

David Wolfe discusses superfoods like Spirulina and cacao beans and how they are some of the most “perfect” foods out there as far as nutrients. He also discusses how our values are making us sicker. We put more emphasis on having a nice car or house than we do having the best possible foods. Why? Because every day we have people marketing to us to tell us that the car is important, the iPod is important, that flat screen is important. We don’t get bombarded with ads for spirulina, kale, or spinach do we?

My favorite part was where Andrew Saul spoke about how the very things that may make us healthier… vitamins, natural medicines, herbs, or supplements, etc. are being touted by our government via the FDA as suspect or dangerous. Every year the assault gets more vicious. They raid stores selling herbal tinctures, they threaten them with law suits, and they make draconian laws that say they can’t tell people that these things can “cure”. The DO NOT want us to have access to the things that could heal us. Thir position is that the only things that can heal us are pharmaceutical drugs. This is the greatest travesty. They want us to believe that anything therapeutically valuable MUST be dangerous. It is in fact illegal in many countries to treat cancer with any sort of nutritional therapy. Even if that is the route you want to go… it is illegal. The only legal therapies are chemo, radiation, and surgery. Ask yourself why that is… money… 200 billion dollars annually.

Doctors rarely if ever prescribe a mere diet change to heal illness. You could have knocked me over with feather when my oncologist told me not to drink milk or eat meat while on Chemo…well I already knew this but I surprised when he told me… cancer cells LOVE acidic animal proteins. How many other cancer patients get this same advice? Not many I think. One of the doctors on the video declared that he thinks 80-90% of hospital patients are admitted due to issues caused directly by poor nutrition. But society at large and the medical community have been trained to ignore that elephant in the room that is nutrition. In fact I remember reading before that medical doctors only get a few weeks of nutritional training. A few weeks in 8 plus years time. That is how much importance they place on food and we are the ones paying the price for that arrogance and ignorance.

One thing that made me see red when I watched this video is that they specifically mention a vitamin that can really help with controlling seizures. I have an epileptic child and due to diet (my doing not the doctor’s) he has been seizure free for 2 years or so now. I never heard one word about vitamins being able to help him. All I heard was MEDICINE. Well, the medicine made him weak, made him lose 20 pounds until he was a skeleton, and it made him scratch his arms until they were bloody and all his doctor wanted to do was increases the dosage. I decided to put him on a special diet, use supplements, and wean him off the meds without the doctor knowing. The Doc’s eyeballs about popped out of his head when he saw a seizure free kid in good health due to naught but good nutrition. The vitamins and nutrients in the food didn’t heal him it just gave him what he needed so his own BODY could heal ITSELF. Now I can clearly see what put us in that position to begin with, his vaccine injury coupled with being a McDonald’s kid for several years.

The only thing I really did not agree with is when one guy said that surgery isn’t helpful. Well, I understand that the body can heal itself but in my case if I had not had my colon re-section I would be dead now most likely. And the amount of pain I was in was un-bearable. I was too far gone to do otherwise and I think for many it does get to that same point. I do however regret letting them remove my gall bladder later on. Yes I got acute pancreatitis but if given time I think I could have healed that on my own…except for the fact that I was taking massive doses of Chemo. I did actually refuse any more Chemo after that against their advice but I didn’t think to insist I keep my gall bladder. That I do regret.

The video also has some VERY alarming things to say about things we are introducing into the body like chemicals, drugs, and silver, mercury fillings you get at the dentist…one word about those…DON’T. There are some horrifying things about cancer which honestly made me really uncomfortable to watch. It was super scary stuff. But along side that there was great info about the Gerson Institute and all they have accomplished in healing cancers without drugs and many times without surgery.

This video is one that all people should watch and high schools should be showing it annually. This information needs to get out to people so that they know that health and wellness can be just a matter of taking personal responsibility.

You can watch it online for only $5 or buy the DVD for $30. I watched online but will also be buying the DVD so I can pass it around to my friends and family. It is an AMAZING film. Watch the trailer below: