↑
You are here: Home / Birth & Baby / The Green Diaper Smackdown 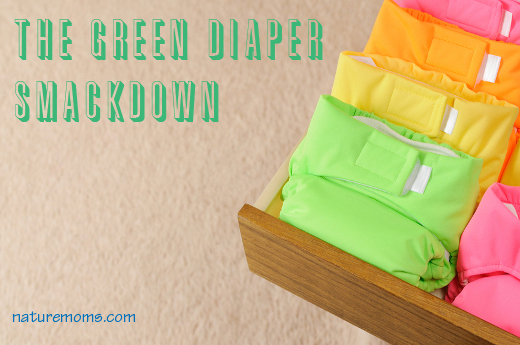 Eight years ago if you asked me what type of diaper I would be using on my first child I would have given you a very confused look and said something like “Huh???”.

Nowadays many parents recognize that this question is not so easy anymore. In addition to the variety at the grocery store… Pampers, Huggies, White Cloud… we also have some others to consider. Disposable diapers with fewer chemicals, flushable diapers, and dozens upon dozens of options in cloth diapers abound.

But which is the greenest, healthiest diapering option? I decided to compare them all and see which diapers came out on top.

#6 The Biggest Loser– Disposable Diapers – Scientific studies keep being released that seem to favor disposable diapers in the disposable versus cloth debate, but even I can see the multitude of flaws in their work. It is frustrating as a cloth diaper user to see their generalizations about how much water, soap, or energy we use to launder cloth diapers when it is all so variable. Disposables are the REAL dirty birdy.

Even in the very beginning, disposable diapers are produced in large factories that spew noxious chemicals into the air and nearby waterways. One factory can be unloading as much as 50 million gallons of waste water a day. There is one in a US town I researched a few years ago, that has caused mutations in fish and an awful stench. If the chemicals being used to make your babies diapers can cause genetic mutation in fish should your baby be spending 3 years wearing them? Off gassing from these diapers has already been shown to contribute to respiratory problems like asthma in laboratory animals.

But the story does not end there. How many trees are hazed to make the paper pulp? Huge amounts of energy go into diaper production and then into packaging (wasteful), and then into transportation around the world via truck, plane, and cargo ship. When the diapers reach their respective stores, consumers spend their hard earned money on something that will last a few hours and then be thrown into the garbage. More energy is used to buy and then dispose of diapers and then they will sit, entombed in a landfill for many generations to come. Are you at ease knowing that your baby’s diapers will be around when your great-great-great-great grandchild is born? Yes, disposable diapers are the biggest loser.

#5 Greener disposables – These are a significant improvement over disposables but yet they are still disposable and kind of antithetical to green and sustainable but they are made better and they have fewer harmful chemicals. Seventh Generation, Tushies, and Nature Babycare are some options in this category. These diapers usually have no chlorine bleach in them from bleaching the diaper pulp. The latter two also have no chemical gels that absorb moisture. Nature Babycare diapers would be my top pick in this category.

#4 Diaper Service Cloth Diapers – These are almost tied with the greener disposables. They rank slightly better because they are reusable. They are not without drawbacks though. Diapers services typically wash diapers on HOT several times, using thousands of gallons of water. They also use a lot of chlorine bleach to sterilize and bleach out stains. All of that bleach is not good for our waterways and not good for baby. That said, I have met some small time  diaper service owners who do not use bleach and watch their water usage closely. You will have to call around and ask.

#3 Flushable Diapers – These diapers from gDiapers are a hybrid. They have a disposable inner shell that fits inside a cloth cover. The inner shell though can be dissolved in water and flushed and not thrown into the garbage. The company insists that plumbing and septic tanks can be spared any trouble by doing the flushing procedure correctly. Water treatment facilities are also supposed to be equipped to handle flushing diapers.

gDiapers fans have come out in droves to say that flushable diapers are better than cloth since washing requires so much water but do not be fooled. Many gDiapers users I have talked to indicate that MOST times it takes 2 flushes to flush a gDiaper. The average toilet uses 3.4 gallons of water per flush. If you flush eight diapers that would be almost 55 gallons of water used everyday to flush the toilet. And then you still need to wash the covers. You could do a full load of cloth diapers (12-18ish diapers) using only 40 gallons of water and .3 cents of electricity. It would be even less than that if you have a specialized energy efficient machine. Drying would require more energy but line drying indoors or out is an energy free option. gDiapers are a good option but not as good as the next contender.

#2 Cloth Diapers – These diapers do require energy to make since the material has to be processed. Cotton is often grown with harmful pesticides so that is a potential “cost” to the environment. Energy is also used to launder them although there are so many variables in how you wash diaper laundry that it is hard to come up with hard data, which is why you cannot trust the disposable diaper slanted studies we see. How you you wash, how much, type of washer used, type of soap used, machine drying, line drying, etc, will impact how green your diaper is.

If you want the greenest cloth diapers you need to look for organic cotton, hemp, or bamboo. Bamboo though has its own issues I don’t have time to get into here but it requires lots of extra processing. I recommend cotton or hemp before bamboo. For diaper covers the best option is 100% natural wool. There are MANY gorgeous wool diaper covers, soakers, and longies available. You can see some of the longies (right) I got for youngest son’s newborn stash below. 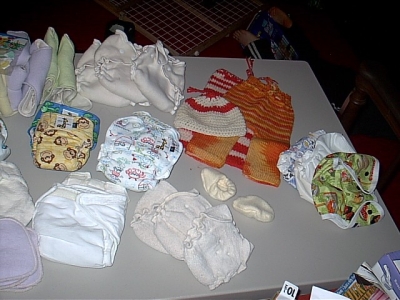 Vegans may have issues with wool but you can buy wool from small family farms that do not mistreat their animals, it is just more expensive. Other than wool I cannot think of another naturally waterproof diaper cover solution.

I think organic cotton prefolds with simple wool covers would be best but fitted diapers really are awesome. I like SwaddleBees Organic Cotton Velour diapers and Ecobaby Absorb-it-alls. For covers I have commissioned hand knit or crocheted covers from wahms. You can find them on Hyena Cart. OR I bought some 100% wool sweaters  from thrift stores and made my own. I also really LOVE Little Beetle Organic Wool Covers.

Natural fibers may be greener but the synthetic fibers are more convenient (waterproof, wicking) and they are less costly. Either is pretty darn green though since they are reusable for one or more children for MANY years. You cannot even compare that to a wear once, throw away, disposable diaper.

#1  Diaper Free – The greenest option is to use elimination communication (EC). It is generally believed that infants have no control over the muscles used in elimination functions. The truth is that a newborn baby does have control over those muscles. Whether baby pees or poops in a diaper or in a container, the baby often does so consciously and deliberately. An observant and in tune parent can work with her baby on the timing and location of those elimination functions. The result is another way to bond with baby and the use of a few less diapers. Tons of parents swear by EC and there are several books written about it including: The Diaper-Free Baby: The Natural Toilet Training Alternative and Diaper-Free Before 3: The Healthier Way to Toilet Train and Help Your Child Out of Diapers Sooner.

What option did I choose? The first time around I chose #6. For my second and third children I chose #2, cloth diapers. 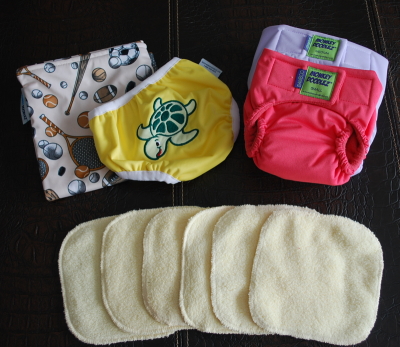