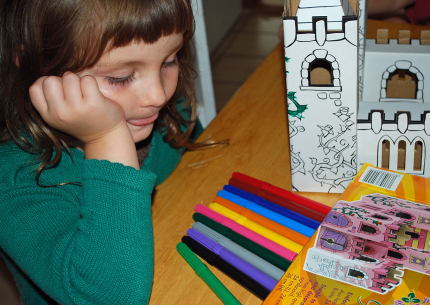 On the heels of my post on ethical toys and I wanted to post about cardboard toys. They are certainly not new… I remember I had a full size cardboard house that I used to play in when I was a little girl. It was very big, and it was black and white so that you could paint or color it yourself to personalize it. After many months of use, when it was starting to tear and generally look raggedy, we tossed it. Every year at Christmas time we would get another one from Sees Candy.

Cardboard toys are low cost and eco friendly. You can recycle them in your own backyard compost pile. They are also wonderfully creative toys for kids. Kids can assemble them and they can personalize them making the toy their own unique creation.

For the past couple weeks my kids have been playing with cardboard toys from the Creative Toyshop. They have TONS of awesome Calafant cardboard toys that go way beyond the simple house I used to play with. They have castles, tree houses, pirate fortresses, dollhouses, and so much more. They provide hours of open ended play and when your kids are done they can be folded away for storage or recycled if they are getting a little too well used. 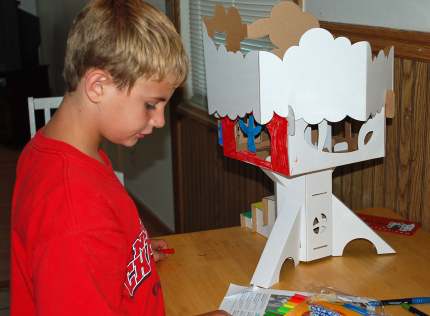 My oldest son has the Calafant tree house. He was pretty much able to put it together on his own from looking at the pictures. The written instructions were kind of useless IMO but the pictures rocked. After putting it together he got busy coloring it. In true creative form he opted not to let the color photo on the box guide his color choices. I knew he would like cardboard toys because for years he has made his own creations out of leftover cardboard boxes. Creating a tree house of cardboard.. heck what could be better?

My daughter has the Calafant Rosegarden Palace. I put it together for her in about ten minutes and she colored it. She referenced the color picture on the box but more often than not chose her own colors… which surprised me since she is all about pink and purple. On a side note she complained that the markers that came with it stunk really bad, LOL. They just had a really strong marker smell which she didn’t care for (she’s a soy crayon girl)… we ended up donating them after she used them. 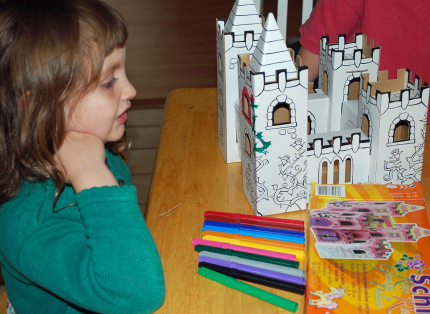 They both loved building and decorating these toys. My son now lets his sit in his room on display and my daughter plays with hers… putting her wooden fairy dolls in it. She plans on embellishing it with glitter and rhinestones… I just keep forgetting to check out the craft section of the thrift store.

I love that these toys are rather small since we don’t have a ton of room in our tiny 1000 square foot house. The child size cardboard house I used to have wouldn’t be practical but these are perfect. All pieces are pre-cut and pre-punched. They can be put together without glue and scissors thanks to the Calafant slot-system. They are creative, they provide hours of open ended play, they are eco friendly, and they are fun.

We probably all have memories of playing in cardboard boxes as kids. We too save any big boxes for the kids to play in before they get recycled. Cardboard toys take that concept and run with it. Calafant (German) makes small, medium, and large toys for all ages and interests. There are some larger ones that kids can play in too, just like I did. Fun!