↑
You are here: Home / A Green Home / Worm Factory for Indoor Composting 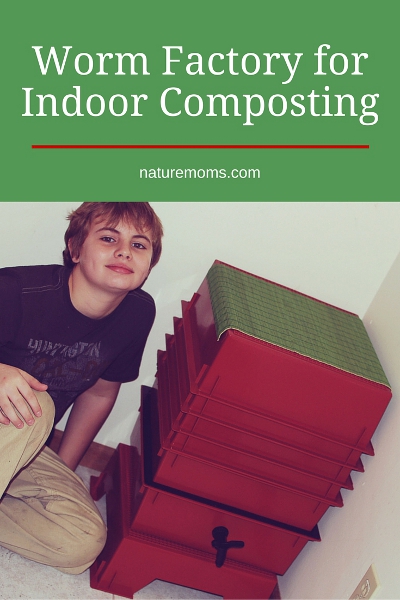 A couple weeks ago we welcomed some new “pets” into the house… Red Wrigglers (worms). They even have a posh new condo in the kitchen so they are getting royal treatment. They are of course expected to pay their way in the form of wonderfully rich and dark compost for our garden this spring/summer.

When we moved into this house it came with no composting area and we had other things on our mind prior to winter so we gave up composting for awhile. But I started to feel guilty about that as I saw scraps sitting in the garbage so I decided to try my hand at indoor composting for winter months. I started researching it and was intent to just rig up some sort of worm bin using plastic storage tubs we have in the garage but I saw there were some issues with doing it this way as well as it being really ugly.. and our worm bin was going to be in the kitchen, visible to all. So I decided that if this was something I was really going to pursue passionately I needed to go with an efficient and easy system. A commercial worm bin seemed the better option and after reading up the various ones and scouring reviews, I chose… The Worm Factory, specifically the Worm Factory DS5TT 5-Tray Worm Composter – Terra Cotta.

It came in only a few days (free shipping too) and I ordered my worms a few days after that. I tried to get them locally but the only source I could find wasn’t answering any calls so I ended up ordering from the go-to place for composting worms, Uncle Jim’s Worm Farm (via Amazon) where you can get a about 1000 Red Wriggler Worms for $15. They came from Pennsylvania, so almost local. We got them in a couple days and they moved into their new digs. I read several places that worms often try to escape and you should leave the lights on in the room where the bin is for a few nights so they choose to stay but my husband works second shift and gets in late and always turned off the lights. They chose to stay anyway… I guess they like it here. Anyway the Worm factory we bought has 5 trays. You start by laying a few layers of moist newspaper down on the bottom of the first tray and then cover with the included coir (coconut husk fiber) and some sand or crushed eggshells. We didn’t have any sand so we went with pastured eggshells. Then we filled the remaining space with shredded newspaper (also included) and a couple whole layers of moist newspaper. At one corner we put some food scraps… onion skin, grated carrots, lettuce, etc. It sat like that for a few days before we welcomed our worms. They came in dry soil so we added them and used a spray bottle to moisten things up and after a few days I took this photo which shows they gravitated to the corner with the food (top right). I went ahead and added some more scraps to the lower corner as well. When I add more scraps I do so in the corners, going in order. After about a month or so I will add the next tray and repeat the whole process. Gradually the worms will seek out new food and will move up to the higher tray (there are little holes for them in the tray bottoms). Or you can take the bottom tray and put in on top and the light will make them move to the lower tray. Repeat until all trays are full. By the time the top tray is being worked, the bottom tray is likely ready for adding to your garden or potted plants.

At the very bottom of the unit is a slanted collection tray for the compost tea. This was another reason I wanted this particular composter. I read several reviews from people who tried using storage tubs and they claim the amount of compost tea they got from the Worm Factory was double. It has a nifty spigot on the bottom so you can collect the tea easily. We are still early in the game but so far there is no odor whatsoever. It looks good sitting in the kitchen (IMO) and it is soooo easy to use. I am glad we went with this system. There is also no need for guilt about buying new plastic because the Worm Factory is made from post consumer recycled plastic. Yeah! Plus it is also helping us compost and encouraging us to grow our own food.. which we plan to do on our backyard deck this year, since we have so little space. I am also collecting and using newspaper instead of sending it to the recycling center. We seem to have enough for composting and for my son’s Bearded Dragons (yes we have two now) just with the little junk papers and community news that gets put on our mailboxes. If you want to compost but live in an apartment or a small space or you just want to keep winter compost going strong by doing it indoors I recommend this system highly. I will post regularly about issues we may have… like potential fruit flies and the like. We may even move this unit outdoors as the weather warms because it can go inside or out if left in a shady, cooler, spot. Either way I cannot wait to get my hands on some of that black gold this spring!

Also another recommendation is this wonderful book on composting with worm bins, Worms Eat My Garbage: How to Set Up and Maintain a Worm Composting System. I read it YEARS ago and never acted on it. Lucky for me I kept it in storage until I needed it! 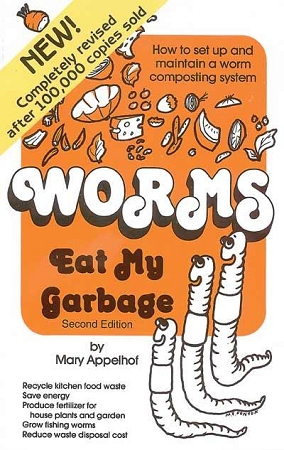 Are you composting yet?