↑
You are here: Home / Political Action / Obama Outlines National Plan for Climate Change – Is it Enough? 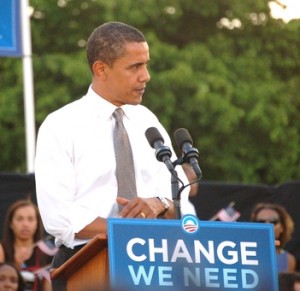 When the news started pouring in that President Obama was making a major announcement about climate change today I was unsure what to think at first. My feelings about his performance this term have been rather lukewarm. He hasn’t done anything to stand up to Monsanto and their stranglehold on this country and he hasn’t done nearly enough lately on green issues such as climate change and clean air. I was especially hoping for more action on this after the Forward on Climate rally in DC this past February, which I attended with my 12 year old son. He was largely mum though after what was the biggest citizen rally to date.

I always hold out hope for a Bulworth moment since he is on his second and last term. Now is the time to stand up to corporate interests and take one for the planet. What has he got to lose? Only the chance to make history and be “the one” who got the wheels spinning and started to turn our current global crisis around I say.

The President’s speech today was not quite on par with my wildest hopes and wishes but I am pleased by what we heard today. I applaud the fact that he is giving the issue the attention it deserves and that he seems to be accepting of the fact that we have some tough decisions to make. The road to finding solutions will not be easy but neither are the ramifications of our failure to do anything. In 2012, extreme weather disasters cost Americans more than $100 billion. If now is not the time to act on climate then when will it be?

In the speech today the President touched on serious flaws in our current legislation. Right now there are no federal limits on the amount of carbon pollution that energy producers can pump into our air. Mercury, arsenic, and radioactive particles are spewing into the air we breathe and no one is doing enough to keep it in check. “It’s not right, its not safe and it needs to stop”, Obama started out by saying. He then declared that the EPA is directed to end the limitless dumping from energy plants by regulating carbon dioxide emissions from new and existing facilities, which account for around 40% of total U.S. emissions.

I love that he put the kibosh on the naysayer talk right away, confirming that we are sure to hear that this will kill jobs, crush the economy, and end free enterprise. We hear it it every time anyone wants to enact tougher legislation on pollution and increase environmental protection. In 1970 our government acted on smog with a clean air act and we heard back then how the economy would be crushed. The only thing crushed was pollution. The same thing happened when legislation was put in place to combat acid rain. The naysayers are out of gas.

I also liked how Mr. Obama basically challenged the patriotism of the naysayers out there by hinting that they have no faith in the innovation of businesses and their ability to be leaders and to find solutions when limits and standards are put into place. They bet against American industry. Why? There need not be a contradiction between a sound environment and strong economic growth. Our American businesses and leaders can take this challenge and run with it. Anyone who hems and haws about the economy swirling the toilet is basically saying we are too dumb to meet this challenge and come out on top. We should ALL be insulted that conservative leaders and media are implying such a thing.

GM and Nike have issued climate change declarations. Walmart has made it a goal to cut emissions by 20%. It is one of the greatest opportunities of 21st century to be a leader on this issue and the companies stepping up should be applauded.

The President briefly touched on the subject of oil and drilling saying that we are not going to stop producing fossil fuels anytime soon but that more drilling is not a solution we can accept. We are already producing more oil now than we have in the past 15 years. We need to scrutinize our use of oil and projects such as Keystone Pipeline to see if the benefits outweighs the costs to our environment and natural gas will be a transition fuel. This part of the discussion was lackluster for me. He targets dirty coal power plants with this new plan (yay!) but dances around the Keystone issue  (boo!) when a rejection is what I was hoping for. Also, natural gas gets touted as a “clean energy” solution. What the frack?

Along the lines of REAL clean energy though he shared that we have doubled the amount of solar and wind power used during his term and this plan will set us up to double it again by 2020. He also called for cooperation to end tax breaks for oil companies, end the funding of new coal plants overseas, and invest in the clean energy companies instead. They are the businesses of the future! He also touched on the fact that developing nations have more to lose to climate change than the US so he plans to work more intimately with other countries to combat these issues together. He intends for the US to be the leader on this issue.

The last part of the speech was intended to mobilize us as a country I think and light a fire under our behinds…asking us to help spread the message about climate change far and wide in our communities. As he stated, “We don’t have time for a meeting of the flat earth society.”

President Obama’s Climate Action Plan isn’t perfect and it wasn’t the Bulworth moment I wanted. It’s not quite aggressive enough in my opinion. Yet all things considered the plan is a monumental step forward for us and it deserves the support of the nation and the world. We do not have to choose between the health of our children and the health of our economy. We cannot fear the future, we have to seize it. Now. Thank you Mr. Obama for opening up the discussion today and laying the groundwork for what will hopefully be important change.

Will you send a message to your Congressional representative telling them to support President Obama’s plan to combat climate change?