↑
You are here: Home / Environment / Your Garden May Be Harming the Bees, Not Helping Them 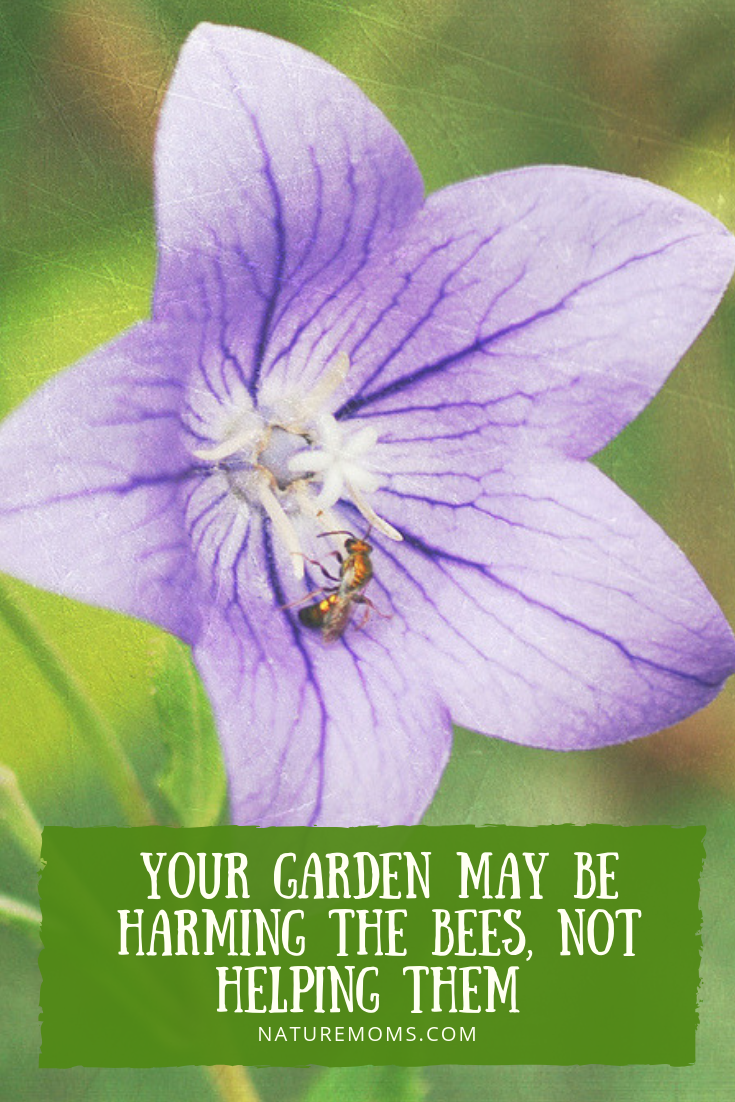 The decline of the bees has been a concern of mine for several years now. I first wrote about why we need bees three years ago and then just again recently with an article on how to attract more bees to your yard and local community. I see personally just how few bees we have buzzing around these days and of course the headlines are full of news too, such as the massive bee deaths that just occurred in Oregon. Movies such as Vanishing of the Bees also highlight the growing problem and it is a HUGE problem on many levels that will adversely affect our future on this planet.

One of the common “solutions” though may actually be part of the problem and we need to educate ourselves so that we are not inadvertently harming the bee population instead of doing our part to help. When a concerned individual decides to make their own property more bee friendly one of the first things they do is probably to plant more flowers and plants that bees will love and feed off of. Modern life and progress means less raw nature for all kinds of animal life and that includes the bees. It only makes sense that one big step to changing that is too start gardening and play host to flowering plants that will give the bees a safe haven and a healthy food source. It can be a problem though when we consider the source of those plants and flowers.

A new study conducted by the Friends of the Earth-US and Pesticide Research Institute has established something rather alarming. They found that 54% of common garden plants purchased at top retailers like Lowes and Home Depot contained neonicotinoid pesticides, which studies show can harm or kill bees and other pollinators, with no warning to consumers. If we are buying garden seeds and/or young plants at places such as these we are bringing pesticides home to our own garden and they can survive in the soil and plants for months and even years!

I know how easy it can be to adopt the thinking that growing from seed is just too much work and that you should be able to get away with plants bought from garden stores or big box retailers even though they aren’t organic. As long as you don’t use nasty pesticides at home you should be fine right? Any residual pesticides in the small amount of soil that comes with the plant will surely be gone before long right? Well, no actually. The pesticides stick around for much longer than we might have anticipated so we really do need to start with organic plants, seedlings, and soil. Most of which is usually not to be found at major garden supply centers. We don’t want to expose bees to the pesticides, be saving seeds from these contaminated plants, or be eating from them if we are also gardening for food.

The European Union is set to suspend the use of three neonic pesticides later this year, after their own scientific review by the European Food Safety Authority found that neonicotinoids pose an unacceptably high risk to bees. The UK’s largest garden retailers have already stopped selling neonics. Despite the growing evidence that these pesticides are in fact killing our bees the giant chemical companies Bayer and Syngenta, who make them, are fighting back aggressively, even suing the European Commission to overturn the ban on the pesticides. Our own EPA has delayed action until 2018 showing that profit will come before common sense on the issue and that is why we need to create change on our own at an individual level and as a community.

We need to stop buying seeds and plants from big garden centers who use these pesticides and be vocal about demanding they STOP this practice. We need to buy organic heirloom seeds and plants from reputable retailers online or from small nurseries who share our values. If you do some looking you are sure to find some companies that fit this bill and they need your support because they are doing vital work.

In the meantime Tell Congress to support the Save America’s Pollinators Act and join us in asking the CEOs of Lowe’s and Home Depot, Robert Niblock and Frank Blake, to give bees a chance and stop selling bee-killing pesticides.