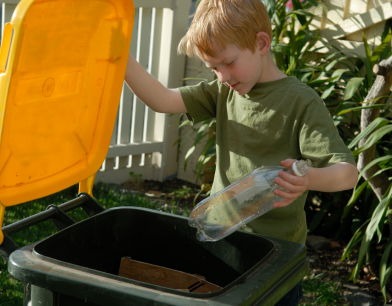 WHAT DOES ZERO WASTE REALLY MEAN?

In a similar way, (almost) everyone wants to get rid of garbage but (almost) nobody wants to adopt zero waste thinking.

Zero Waste is an idea that is spreading from one city to another, from one county to another and is being adopted by environmental groups, individuals and even countries.

But what is it? In one sense, it really isn’t that difficult. Zero Waste means that there isn’t any waste. No garbage! No throwing anything away in a pit in the ground! No burning things just to “get rid of them”. Everything is reused. On this level, the concept could hardly be simpler.

Unfortunately garbage has been with us for so long that most people have internalized it as a social behavior. Too many people have convinced themselves that the creation of garbage is an innate activity, even a social right! No matter that there is nothing to back up this defeatist idea except that we are used to it. So the first job
of a zerowaster is not just to define the concept academically but to instill comfort in the idea that the creation of garbage has become unacceptable, unnecessary and no longer has to be tolerated.

A short while ago, cigarette smoking was considered to be a personal right. When people began to organize against polluted air, a powerful industry fought like a tiger to continue their socially destructive sales. People who had grown up with smoking shouted that they had a right to pollute everyone’s air and no one could stop them. But social expectations changed. The rights were turned on their head to where no one has the right to pollute. The “right” to create and throw away garbage is another delusion that can and will be changed. Wait and see!

Moving to a deeper level, zero waste is a way to organize society so that every article or commodity that is used, by industry, commerce or personal consumer, is designed for reuse after its first use. And then for reuse after that.

I would like to tell you that this is a simple change from today’s practices but I can’t. There are lots of implications in that brief description.

Today, there is essentially no design for reuse at all. To incorporate this new overriding design principle will take a lot of engineering and technical changes.

Unlike recycling, zero waste is not an end-of-pipe strategy. It means abandoning the idea that articles are used and discarded and then, surprise! we suddenly need to find a way to reuse the materials that are in them. With the adoption of zero waste principles, this will never happen, because the reuse practices were designed in right from the start. So it is clear that zero waste has very little in common with recycling. In fact, if zero waste thinking is implemented, recycling will essentially disappear. Recycling of materials will persist only when no higher form of reuse can be found, and then only temporarily until a higher form of reuse is found.

Are you confused by this? Are you thinking that design for reuse is the same as design for recycling? Not at all! In most cases, recycling is the lowest form of reuse you can find. This is because the most important thing to reuse is not the materials of which an item is made but the function that it serves. The first goal of any redesign is to make the entire article, or the largest piece of it, reusable in its highest form. Breaking a complex article into its bare materials is hardly better than discarding it into a dump. True, it temporarily keeps the materials out of a dump. But by degrading the complex article into mere materials, you practically guarantee that those same materials will soon find their way into another dump. And in many, many cases, they won’t even stop to pass go — “recycled” materials often move directly into dumps. End-of-pipe methods are hugely inefficient.

Recycling has been an amazingly successful social innovation. Over the past thirty years, it has raised the public consciousness and made dumping much less acceptable. But now it is time to move past that into taking true responsibility for everything that we create.

Why is function more important than the mere materials of which used articles are composed? Here are some examples. Consider the glass and plastic bottles that we are so often urged to recycle. Their function is to contain. Their materials are just glass or plastic. How much of the value of the bottle lies in the material of which they are made? Maybe five percent, or even less. All of the value is found in the proprietary shape, in the unique profile, in the recognizable identity, in the seal which allows them to be closed and poured from
— in short, in the fact that they can be used to contain a beverage. When a glass bottle is broken, it loses all of that value. In order to then recover some small residual value from the broken glass, it has to be transported a long distance and then melted and reformed into a new bottle at great expense in fuel. Then it has to be refilled with some product and trucked back to the original customer. What a waste! How much better it would be to simply refill the original, unbroken bottle. It is already in the hands of a bottle user who just emptied it. No transportation and no remelting. This is what reusing function can accomplish but recycling discards.

As for the crushed plastic bottles, they are of so little value that in most cases, their “recycling” is just a pretense to make them more attractive to the public. In fact, they are most often taken directly to a dump.

In the case of the bottle, responsibility does cost the user something. He needs to wash out his bottle, keep it intact and ultimately bring it to a refilling station in order to refill it. When the garbage industry markets its pretense of recycling by telling the homeowner that there is no need to wash or clean, no need to separate plastic from glass, they are blowing smoke. They are selling irresponsibility and trying to take advantage of laziness. But the result is that the planet fills up with polluting garbage and destroys our earth’s patrimony, both silica (for glass) and petroleum (for transportation and heat). As we approach the end of the Age of Oil, we must simultaneously end the Age of Garbage.

Another example is found in the way that computers are mismanaged by the garbage industry. These immensely complicated instruments, which were wrung from simple materials by the application of high engineering skills, years of expensive research and the prodigal exploitation of human labor in multibillion dollar fabrication plants are insulted by the garbage industry which brightly claims them to consist of nothing but some steel, some plastic, some glass and bits of gold and copper. They actually have developed ways to crush, smash, shred and smelt these machines back into the lowest forms of raw materials. What a waste!

Even without the benefit of design for repeated reuse, there is a smaller industry which finds that it can refurbish and reuse many of these computers. They call themselves the Computer Refurbisher Industry and every week they collectively provide thousands of used computers to schools, training classes and people who could not otherwise afford a computer. But imagine how much more they could accomplish if those same computers were actually carefully designed for long life and perpetual reuse of all possible parts and features. Designing willy-nilly for maximum profit, assuming that a dump will always be there to welcome anything anyone wants to throw into it, is a primitive, irresponsible way to run a civilized manufacturing industry.

There is one industry that illustrates these principles so beautifully, it is essential to take a look at it. Imagine an industry that spends a great deal of money and human labor to produce a product that uses no materials whatsoever but can nevertheless be designed for reuse. Can you guess what it is?

The industry I have in mind is the one that produces software. From the zero waste point of view this is no different from the automotive industry, but the issues are clearer. Every programmer knows that he is simply wasting effort if he designs software to be used once and never again. There is a tremendous push in the software industry to design software in reusable modules called objects and other names. So if the product has no materials to speak of, where does the recycling come in? Recycling theory may look at only the dribbles of paper or plastic that the software is recorded on. But the real cost of software is in the human labor. The huge investment in materials represented by software are all of those materials used by all those programmers as they buy homes, eat food, drive cars, read books and newspapers etc. In an exactly parallel way, the real investment in a bottle, which is summed up in the concept of function, is the resources used up by the laborers and engineers who created the bottle. This is the only reason there is such a wide gap between the value of the bare plastic or glass materials and the completed bottle. The same is true of computers, cars and every other product we produce.

Recycling has been reinterpreted by the garbage industry to be merely an add-on to the collection and disposal of garbage. California law, especially in AB 939 passed in 1989 has obligingly mandated what is called diversion, as the desired form of reuse. This means, first make garbage but then divert a small portion of it into recycling. It is the garbage industry which owns most of the beat and heat recyclers, and which picks up the most profitable materials at the curb. They have also instituted a way to fund recycling departments and efforts that is insidious, namely by surcharges on dumping. This gives recyclers a stake in continued dumping, undercutting their ideological commitment to getting rid of dumps.

Zero Waste, on the other hand, suffers from no such contradictions. It stands for the end of all garbage as we know it and for the end of that harmful anachronism which is the garbage industry. It requires no direct subsidies since the reuse of all manufactured articles will be paid for at the time of first sale. The major indirect subsidy which it requires is the same one that all modern technical industries require, namely university based scientific research to develop ways for manufacturers to design for reuse.

Zero Waste closes the responsibility gap by demanding that our society stop pretending that unwanted articles and goods can be ignored, thrown away and discarded into dumps. Down that road lies all pollution. In taking responsibility, we are also taking back our one, precious planet. There can be no alternative.